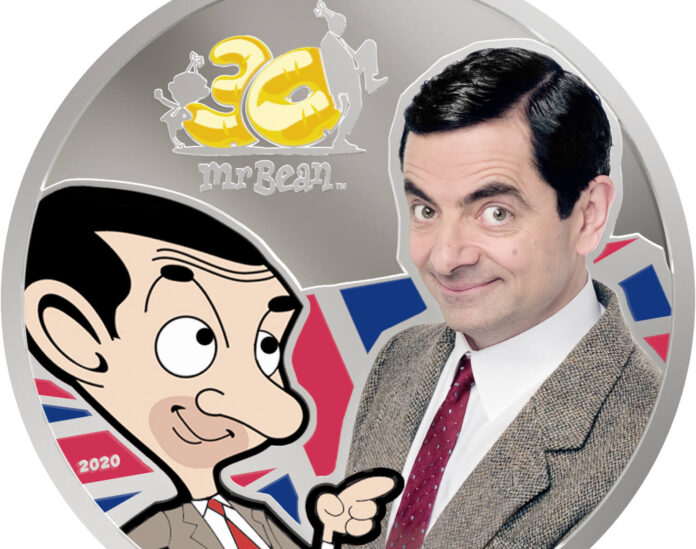 30 years ago, Mr. Bean was broadcasted for the very first time. Today he’s an integral part of popular culture and represents the UK all over the world. CIT dedicates a coin to him that is sure to appeal not only to fans of the British artist.

One side features a three-quarter view of Mr. Bean in front of the Union Jack in two appearances: the actual human being right looking to the left and the hero of the animated TV series left looking to the right. In the upper field, the anniversary logo “30 years Mr. Bean”.

The other side features the portrait of Queen Elizabeth II by Ian Rank-Broadley (initials: IRB); around it the name of the ruler, the issuing nation and the denomination.

On 1 January 1990, ITV – a British network of commercial television stations – broadcasted Mr. Bean for the very first time. Comedian Rowan Atkinson, who was only known in Great Britain back then, contributed to the series’ script and concept: over the course of 25 minutes, the story’s hero has to endure an exam, puts on his swimming trunks at the beach and annoys fellow churchgoers. Mr. Bean masters the art of encountering difficulties where nobody else would ever have expected them.

For Rowan Atkinson, 1 January 1990 was the beginning of an international career. In his role as an unworldly, slightly anarchic, clumsy Mr. Bean, he won the Rose d’Or of the Montreux film festival and the hearts of millions of viewers in the very first year it was broadcast.

Since then, Mr. Bean has been an integral part of popular culture. The Mr. Bean animated TV series started in 2002. The series and films were broadcast in almost 200 countries. Mr. Bean has more than 90 million followers on Facebook and 6.5 billion (!) people saw his clips on YouTube. Today, Mr. Bean is an international symbol of Great Britain, which is why he was also present at the opening of the London Olympic Games.

So what better is there to say about a commemorative coin celebrating the 30th birthday of this eternal child than that it sets a numismatic monument to the mischievous character of Mr. Bean? With a brilliant colour print on the proof quality surface, CIT Coin Invest created a coin that is sure to appeal not only to fans of the versatile British artist.

For further information about the coin visit the website of CIT Coin Invest.

And here you can find out more about smartminting©.

This is the official Mr Bean live stream channel on Youtube.

And in case you need Mr Bean’s teddy bear, a mug or just some information, have a look at the official Mr Bean website.