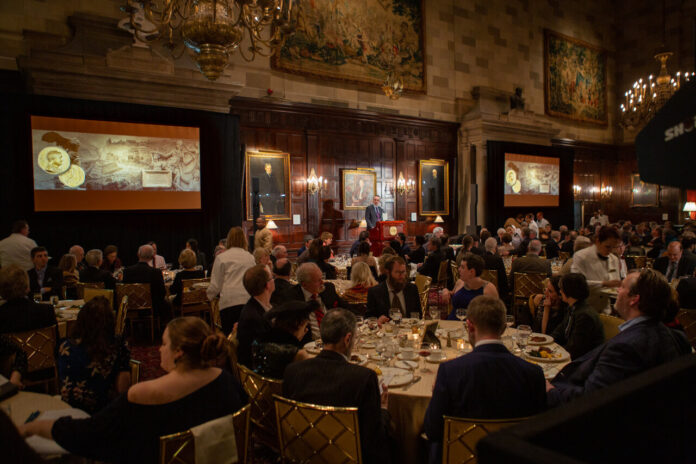 On Thursday, January 16, 2020, some 180 friends of the American Numismatic Society gathered to honor Richard M. Beleson with the Trustees’ Award at the Annual Gala Dinner, held at the Harvard Club in New York City.

Mr. Beleson has been a steadfast supporter of the ANS since joining the Society in 1995, and he served on the Board of Trustees from 2010 to 2016. He is an ANS Fellow, a generous donor to the Society’s Campaign to Endow the Chair of the Executive Director, and a dependable supporter of numismatic scholars and projects. He is also the secretary-treasurer of the Ancient Numismatic Society in San Francisco, where he lives with his wife, Kim. They have three grown children and one grandchild.

The Trustees’ Award was presented to Mr. Beleson by Mr. Sydney Martin, President of the ANS Board of Trustees. In his remarks, Mr. Martin said that “all the ANS Trustees, staff, and members … are grateful for all Rick has done for the ANS, in particular, and numismatics in general. To their good wishes and congratulations I would like to add my heartfelt thanks. We are very fortunate to have such a staunch supporter of the Society, one who has demonstrated again and again his fervent concern for the enduring value of this institution.”

The event also included the presentation of the 2019 Burnett Anderson Memorial Award for Excellence in Numismatic Writing to Dr. Peter van Alfen, Chief Curator at the ANS. While bestowing the award on a very surprised Dr. van Alfen, Mr. Mark Anderson, the son of the late Burnett Anderson, noted, “My father would have strongly supported Peter’s receipt of this award, for what he has brought to numismatics, for the many activities he has stewarded in his career at the ANS, and especially for the fine scholarly product and high standards he brings to the written word.” The Award is a cooperative product of three institutions: the American Numismatic Association, the Numismatic Literary Guild, and the American Numismatic Society.

Later in the evening, Dr. van Alfen and Mr. Kenneth Edlow, Chairman of the ANS Board of Trustees, presented a specially commissioned award to Dr. Ute Wartenberg, in thanks and appreciation for her two decades of dedicated leadership to the Society. The ANS commissioned the medal from Joao Duarte, the winner of the Society’s Saltus Award in 2011. Mr. Duarte said he was thrilled to be asked to create something significant and unique for Dr. Wartenberg, as he is an admirer of both her and the Society, and he generously donated his time and efforts in creating this wonderful object.

At the very end of the Gala dinner, Executive Director, Gilles Bransbourg called up the Society’s longestserving member, Mr. Garfield Miller, who earlier in the year announced his retirement. In praise and thanks to Mr. Miller, Dr. Bransbourg commended him for his 40 years of dedicated service to the ANS and presented him with a rare commemorative medal, engraved with gratitude and appreciation.

Every year the American Numismatic Society raises critical revenue through Gala ticket sales, program advertisements, sponsorships, contributions, and the proceeds from a live and silent auction. These funds are used to further the Society’s mission of supporting research and education in numismatics.

We already reported on the presentation of the Burnett-Anderson-Memorial-Award for Peter van Alfen.

And we are proud to think of the fact that Ursula Kampmann received the Burnett Anderson Memorial Award during the ANS Gala Dinner in 2016.

October, 20. 2022
“Bactrian Indo-Greek Rulers” (BIGR) is a new online typology and research tool for ancient Graeco-Bactrian and Indo-Greek coinage. It was launched by the American Numismatic Society and the Centre for the Study of Ancient Documents at Oxford University.
error: