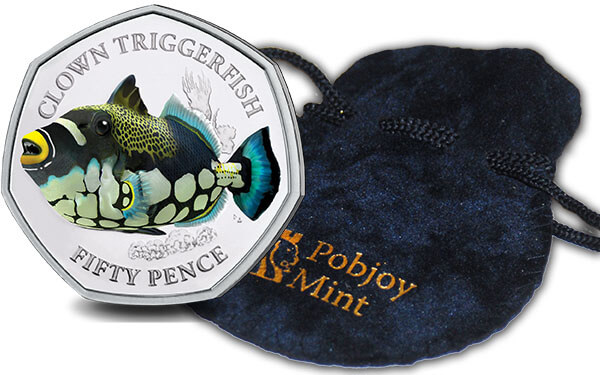 Pobjoy Mint announces the sixth and last coin in the stunning series of 50p coins featuring Sea Creatures issued on behalf of the British Indian Ocean Territory. The sixth coin in the collection features the Clown Triggerfish, known as the big-spotted triggerfish due to the big white spots that cover most of its body. The design on the coin features an adult Clown Triggerfish swimming along coral reefs.

The coin is available in Cupro Nickel Diamond Finish with the Clown Triggerfish portrayed in full color really bringing its pattern to life. A special color album, which is sold separately, has been designed to house all six coins of the collection. The coin is also available in colored Proof Sterling Silver. The obverse of the coin features the Pobjoy Mint exclusive effigy of Her Majesty Queen Elizabeth II.

The Clown triggerfish is a brightly colored and eye-catching species and the most popular of the trigger species. It has a brown body and the lower half of it is covered in large white spots. The mouth is surrounded by a yellow field with a white edge. On its back the Clown triggerfish has a yellow to gold colored field. The tail fin can sometimes be of the same yellow/gold color.

This triggerfish is a foraging predator on coral reefs in the Indo-Pacific Ocean. Like all triggerfishes, the Clown triggerfish has very strong jaws and broad teeth, perfect for eating its preferred prey, hard-shelled invertebrates like sea urchins, crustaceans, and mollusks. Its ‘funny by nature’ name comes from its spots, lines, and head markings which make it look almost like it is wearing clown makeup.

The British Indian Ocean Territory comprises the 50 islands of the Chagos Archipelago which is only a total area of 44 square kilometers but the territorial seas cover over 60,000 square kilometers containing coral reefs which comprise over 10% of Indian Ocean reef cover and the cleanest seawater ever recorded. This means that the waters around Chagos are a vital natural laboratory for scientists to learn how a healthy reef lives and to study the diverse wildlife who live in or visit these waters as breeding and feeding grounds.

For further information on the coin, visit the website of the British Pobjoy Mint.

More issues by the Pobjoy Mint have already been added to our online archive Cosmos of Collectibles.

If you do not want to miss out on any new issues, subscribe to the Cosmos of Collectibles newsletter, which is published every two weeks.

The Sea Creatures series of the Pobjoy Mint started with the Chagos Anemone fish, the Yellow Longnose Butterflyfish was the fifth coin.

Here you can find some interesting facts and information about the Clown Triggerfish.

October, 22. 2020
In light of the global pandemic, Pobjoy Mint announced the release of a bi-metal £2 coin commemorating 200 years since the birth of Florence Nightingale, who established the principles of the modern nursing and hospital sanitation.
error: