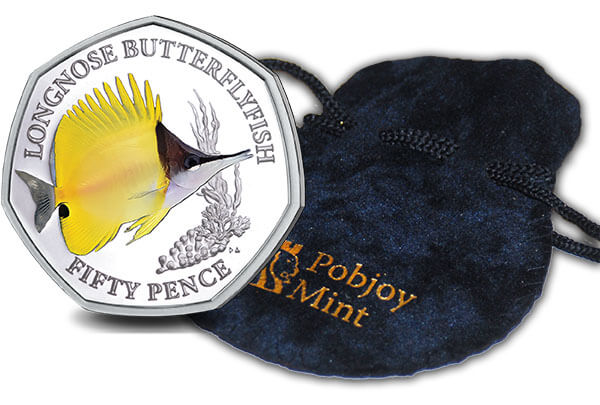 Pobjoy Mint announces the fifth coin in the stunning new series of 50p coins featuring Sea Creatures issued on behalf of the British Indian Ocean Territory. The fifth coin in the collection features the Yellow Longnose Butterflyfish named in three languages for its distinctive elongated jaw.

The design on the coin features an adult Yellow Longnose Butterflyfish swimming along coral reefs. The coins is minted in cupro-nickel with an mintage of 2,750 examples and 175 coins in silver.

The coin is available in cupro-nickel Diamond Finish with the Yellow Longnose Butterflyfish portrayed in full color really bringing its pattern to life. A special color album, which is sold separately, has been designed to house all six coins of the collection. The coin is also available in colored Proof Sterling Silver. The obverse of the coin features the Pobjoy Mint exclusive effigy of Her Majesty Queen Elizabeth II.

The Yellow Longnose Butterflyfish (Forcipiger longirostris) is a very common butterflyfish. Along with its relative, the big longnose, they have one of the longest Hawaiian fish names, lau-wiliwili- nukunuku-‘oi-‘oi. Its meaning is “leaf of the wili-wili tree with a sharp nose.” The hue of the fish is similar to the coloring of the big, billowy leaves of the Hawaiian wili-wili tree. The Yellow Longnose Butterflyfish has a disc-like shaped body that is laterally compressed, and it has a long protruding snout tipped with a small mouth. The dorsal fin is continuous, and it has a rounded tail fin. This fish has a bright yellow body as well as yellow dorsal, anal, and pelvic fins. There is a black bar over the nape covering the upper half of the eyes, giving a mask-like appearance.

These Butterflyfish spend most of their time near exposed seaward reefs where there is lots of coral growth, rocky caves, and ledges, and they are also found in lagoon reefs. They inhabit depths from between 3 to 476 feet with environments that include everything from shallow flats to very deep walls. They are usually seen in pairs though sometimes seen in small groups of as many as five individuals, and occasionally they are seen alone.

For further information on the coin, visit the website of the British Pobjoy Mint.

More issues by the Pobjoy Mint have already been added to our online archive Cosmos of Collectibles.

If you do not want to miss out on any new issues, subscribe to the Cosmos of Collectibles newsletter, which is published every two weeks.

The Sea Creatures series of the Pobjoy Mint started with the Chagos Anemone fish.

Here you can find some interesting facts and informations about the Yellow Longnose Butterflyfish.

Penultimate Coin in Series of the Big Five Features the Sleek...

June, 6. 2019
Pobjoy Mint has released the fourth coin in the popular series of five featuring the Big Five African Animals. The penultimate coin features the majestic Leopard and is issued on behalf of Sierra Leone.
error: