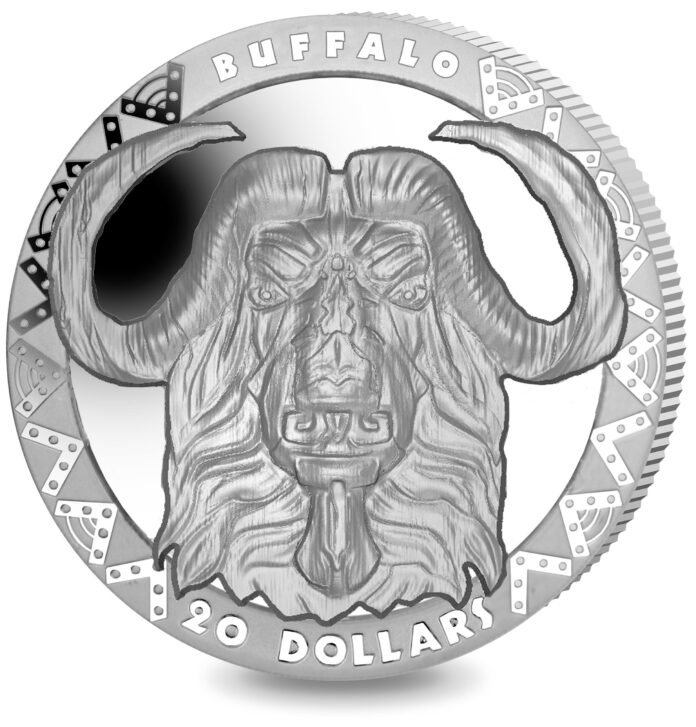 The fifth and final coin in Pobjoy Mint’s Big Five series features the Buffalo, the only animal of the Big 5 not to be endangered. The coin has been produced in High Relief in 2oz Fine silver and is issued on behalf of Sierra Leone. The coin features the head and horns of the Buffalo looking on with purpose.

The special incused rim features an African pattern to continue the theme. This is the final coin in the 2019 series of the Big 5 and completes this impressive collection.

There are millions of Buffalos across the world, particularly of the water Buffalo variety used commonly for preparing land for farming purposes and carrying heavy loads. The African Buffalo is a slightly different species to the domesticated Buffalo. Used to fight off predators such as Lions and Crocodiles, they can be wild and unpredictable. They are considered by many to be the most dangerous of the Big Five to game hunters, with wounded animals likely to ambush and attack the hunter.

If you are planning a trip to Africa these iconic Big Five animals are the ones that come to mind quickly, they are magnificent in strength and presence and will capture the imagination of any Safari trip. The term ‘the Big 5’ was originally created by game hunters to represent the most difficult game to hunt but thankfully when you go on a safari these days the only item you will be pointing at the magnificent animals is a camera.

You can find more information about the coin and the collection at the website of Pobjoy Mint.

CoinsWeekly published an article about the coins featuring the Leopard and the Elephant.

Find out more about the African Buffalo and how to conserve this strong animal at the African Wildlife Foundation’s website.

They might have an aggressive nature but when it comes to fight off predators, they have each other’s backs: