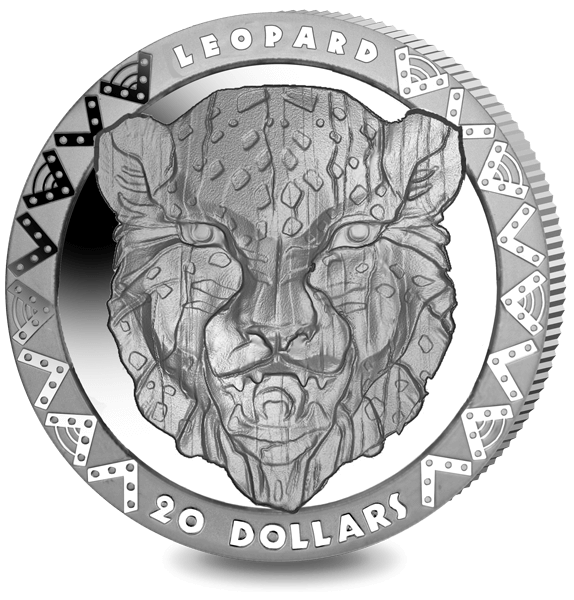 Pobjoy Mint has released the fourth coin in the immensely popular series of five featuring the Big Five African Animals. The penultimate coin features the agile Leopard.
Issued on behalf of Sierra Leone, these new coins are being produced in magnificent High Relief which really emphasise the power of these animals and illustrate the appeal of these ‘famous five’.

If you are looking for an adventure that is unlike any other an African safari is probably the answer. With breath-taking landscapes and amazing wildlife Africa is a world apart and it would be easy to be lost in the magic of this part of the world. The different species of African wildlife are all incredible but everyone goes hoping to catch a glimpse of the Big Five in their natural habitat and to be able to tick the “famous five” off their bucket lists.

The fourth coin in the series features the Leopard, the most elusive of all the Big Five animals. As these cats are naturally shy and exclusively nocturnal, leopards spend their days hidden from view. They are superb climbers, using the trees to scan the surrounding area for prey and also to store their catches away from other predators. Leopards are remarkably camouflaged with their spotted coats. They cover exceptionally large territories and their natural prowess for hunting relies on their amazing capability of running at speeds of over 35 miles/56 kilometres an hour.

The coin has been produced in stunning High Relief in 2oz Fine Silver. The coin features the head of a Leopard styled as though it is an African mask. The special incused rim features an African pattern to continue the theme. This is the fourth coin in the series and a final coin will be released featuring the remaining animal of the group known as the ‘Big Five’.

You can find the collection of the Big Five African Animals coins on the website of Pobjoy Mint.

Find out which animal started the series off in this CoinsWeekly article about the “Big Five” series.

If you want to learn more about the African Leopard and the other famous animals known as the ‘Big Five’, visit the Africa Travel Co website.

For an insight into the leopard’s hunting behaviour, watch this video on Africa’s ruthless predators.

March, 25. 2021
Pobjoy Mint has dedicated a new series of six coins to sea creatures. The first colored coin features the Chagos Anemone Fish – aka clownfish – and is issued on behalf of the British Indian Ocean Territory.
error: