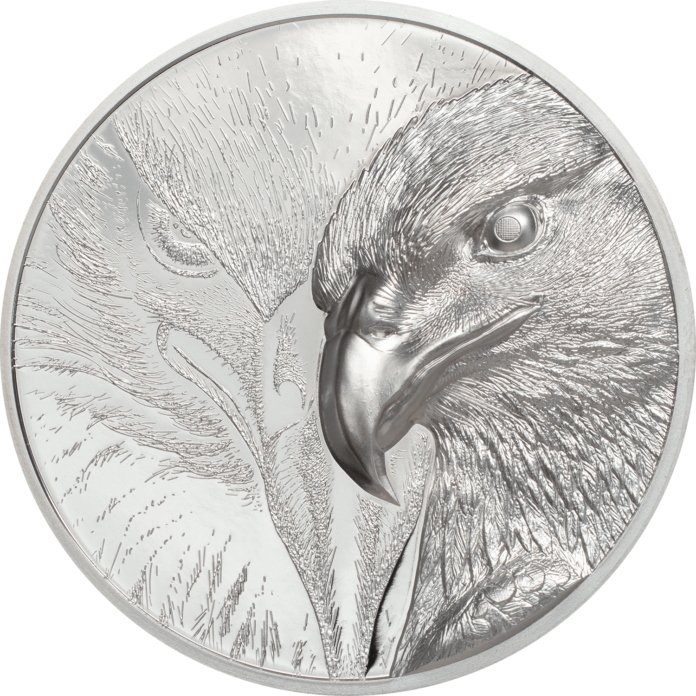 With the mini series “Majestic Eagle”, CIT Coin Invest presents the first products of a new generation. Thanks to a significant enhancement of smartminting© technology, it is now possible, for the first time, to produce high-relief, proof coins, on which the highest points of the relief are not determined by technical necessity, but rather by the artist’s creative preference.

The obverse depicts a combination of a front and side view of the head of a golden eagle. The reverse depicts the claws of the eagle, with four talons holding an arrow; above, the emblem of the Central Bank of Mongolia, with the relevant denomination in Cyrillic characters underneath; gold and silver issues underneath, “MONGOLIA” in Latin characters, as well as weight, purity, and material. A complex meander pattern forms the background.

With 100% higher relief than traditional smartminting©, the new technology achieves a more realistic depiction of the eagle’s talons and beak than has ever been possible before in the history of coinage.

For the first time, smartminting© was also used – for the “Majestic Eagle” series – to mint gold and copper coins, meaning the new technology opens up previously undreamt-of possibilities. So, even on the gold coin, with a weight of 1/10 ounce and a diameter of 16.5 mm, the impressive relief really comes into its own.

Be it copper, silver, or gold, every piece in the “Majestic Eagle” series is a prototype of a new generation of commemorative coins, for which, thanks to the new smartminting© technology, innovative artists will be able to develop entirely new designs. The coins were minted by B. H. Mayer’s Kunstprägeanstalt, Munich.

More information on the coins of the mini series is available on the CIT website.

Learn more about the Golden Eagle on the National Geographic website.

July, 8. 2021
CIT Coin Invest has dedicated a coin to the mysterious vampire. For the third time the Liechenstein company ventures into the realm of primal fears and intense emotions with its successful series “Trapped”. As always with state-of-the-art smartminting© technology.
error: