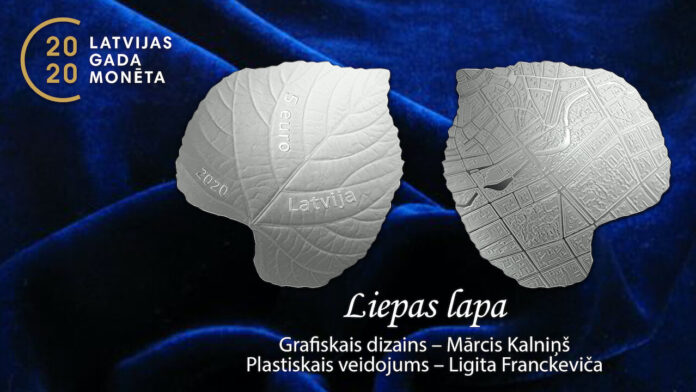 In the traditional public vote, “Linden leaf”, a collector coin dedicated to ecology, has been voted Latvia’s Coin of the Year 2020. Overall, the public vote organized by Latvijas Banka and the news portal Delfi.lv received nearly 8000 votes, including approximately 2800 votes cast in favour of the coin “Linden leaf”.

The author of the graphic design of the collector coin “Linden leaf” is Mārcis Kalniņš. He made his debut in coin art in 2016 with the collector coin “The Earth” which was a unique coin in terms of its shape and technical solution and was dedicated to the place our planet occupies in the system of human values and the Universe. The author of the plaster model of the coin “Linden leaf” is Ligita Franckeviča, and the coin was struck by Koninklijke Nederlandse Munt (the Netherlands).

The collector coin “Linden leaf” is dedicated to ecology which plays an increasingly important role in our lives. With growing numbers of people moving to urban areas, one of the most important tasks of urban developers is to make cities as pleasant to live in and green as possible. This has resulted in the concept of a sustainable city where everything is in balance with the environment. Urban nature is extremely beneficial but also critically vulnerable. This is the balance humans have to strike to maintain their urban environment livable. We can all make our contribution to shaping a greener and more pleasant urban environment by changing or adapting our daily habits.

“The collector coin “Linden leaf” is a reminder to the public at large and every one of us that the balance of nature is fragile and should be cherished and protected. The concept of sustainability, including the idea that we should leave our planet to the next generations in a better condition than we received it from our parents and grandparents, has gained prominence over the last few years. Latvijas Banka’s collector coins are miniature art works, and I find it symbolic that they also depict contemporary themes,” says Jānis Blūms, Chairman of the Coin Design Commission of Latvijas Banka and Head of the Cash Department of Latvijas Banka.

The expert commission of the Latvian National Museum of Art (LNMM), composed of Māra Lāce, LNMM Director, Inese Baranovska, Head of the Decorative Art and Design Department, and Elita Ansone, Head of the Collections and Scientific Research Department, also picked its favorite this year. The LNMM named the collector coin “Linden leaf” the most outstanding coin in terms of artistic solution, pointing out that the choice fell on a clear and precise conceptual representation of a topical issue. Moreover, environmentally friendly methods and materials were used in the creation of the coin.

Furthermore, SIA Tilde and the Culture Information Systems Centre, in cooperation with Latvia’s libraries, organised an online quiz “Recognise the Cultural Symbols on Latvian Coins”. Overall, 439 participants took part in the game. They represented 139 libraries and played 5054 games. Five winners will each be awarded the collector coin “Personal freedom”.

The Other Competitors of the “Linden Leaf”

Four collector coins dedicated to the Latvian culture, history and universal human values were issued in 2020:

Since 1993, Latvijas Banka has issued 98-lats collector coins and 39-euro collector coins, with over 50 Latvian artists having participated in designing them.

The Coin Design Commission of Latvijas Banka (the former Commission for the Thematic Concept of the Banknotes and Coins), which has been active since 12 November 1993, plays an important role in the coin issuing process. The Commission consists of the employees of Latvijas Banka, outstanding Latvian experts of art and culture as well as artists and scientists.

The coins can also be found in our database Cosmos of Collectibles.

Here we presented the Latvian coin dedicated to the 1960s Modernism.

And here you can find more information about the public voting for Latvia’s Coin of the Year.

What Makes an Art Medal a Great Art Medal?

May, 13. 2021
Was the vote on the 2021 American Medal of the Year influenced by what can be called zeitgeist? Ursula Kampmann dared to raise this question in her editorial. Find here the answers of two eminent members of the jury involved: Mel Wacks and Philip Atwood.
error: