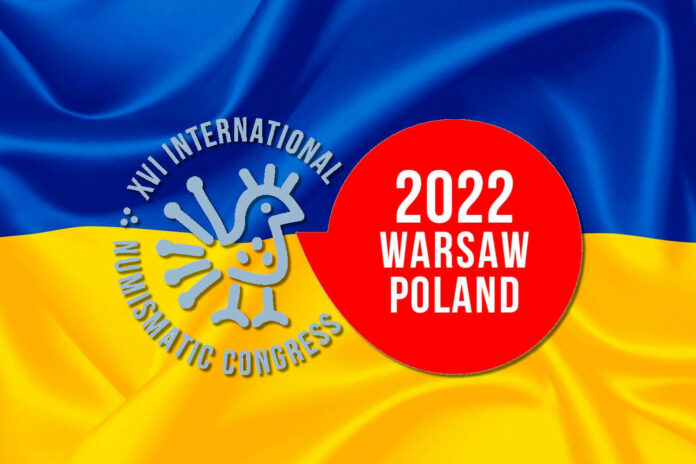 On 9 March 2022, the Organising Committee of XVI INC published this revised statement on the War in Ukraine on their website:

On behalf of the Organising Committee of the XVI International Numismatic Congress, we strongly condemn V. Putin’s aggression on the territory of Ukraine. Following the decision of the Polish Ministry of Science and Higher Education to suspend all contacts with Russian scholars resulting from the escalation of Russian activities and the institutional involvement of Russian science on the side of the regime, we are obliged to inform you that the participation of Russian citizens in the XVI International Numismatic Congress in Warsaw will not be possible in any form. At the same time, we offer all our support and help to all persecuted colleagues who, by opposing the war, have found themselves or will find themselves in danger or exile.

Why Did the INC Organising Committee Change Their Position?

In an e-mail sent out to INC members, colleagues and friends from all over the world, the committee explained more in detail the new statement:

Many of you will be surprised to receive yet another statement from the Organizing Committee of the XVI International Congress of Numismatics. It is exactly in six months from now that we will greet many of you here in our home country of Poland. While we are preparing for what was supposed to be a joyous event of numismatists from all countries getting together, a dark shadow now looms over our country and the whole world. Russia, under its cruel ruler, Vladimir Putin, is waging a terrible war, in which civilians are brutally killed, cultural and historical sites of Ukraine are annihilated, and millions of people are fleeing from their homes to avoid death. Here in Poland, we have witnessed over centuries what such wars and occupation mean for a country, and we stand in full solidarity with our Ukrainian colleagues.

You all will have read the many statements by academies, museums, universities, and other institutions that have come out over the last two weeks. We had posted a first statement when the war broke out, as we were hoping that we could keep politics and scholarship apart. Now, the situation has changed, and we too have posted a statement on our website, in which you will read that our colleagues from the Russian federation are not allowed to participate in our congress. Russian citizens who have fled their country or who have left many years ago are of course welcome to attend.

Our statement was written a with a very heavy heart. Some of you have witnessed our efforts and dedication over the last four years to unite all numismatic scholars, but in particular those from Eastern Europe at the XVIth International Congress of Numismatics. Seeing these efforts destroyed in the space of two weeks is painful, and we would like to assure you that this decision was taken after lengthy deliberations and in consultation with many of our colleagues. Our hands are also bound as a directive from the Polish Ministry of Science has instructed us to break off all contacts with Russian institutions and colleagues. We have received encouragement from colleagues in Russia who oppose this war as much as we do. As scholars we stand united for academic freedom and it will not be by Russian hands that this will be destroyed for the world.

We therefore ask you to join us all in Poland in September, and we hope that this terrible war will have ended by then. To end on a positive note, we have decided to extend the early-bird payment deadline by a month to 21 April.

“Everything is mixed up forever,

And I can’t tell

Who is the beast and who is the man,

And I can’t tell who’s the beast and who’s the man.”

For more information about the XVIth International Congress of Numismatics 2022, visit the INC 2022 website.

Here you can read about what you can expect from the INC 2022 in Warsaw.

The International Numismatic Congress in Warsaw is currently looking for sponsors for the INC 2022 You can find more information in this article.

Currently the Ernst von Siemens Kunststiftung has started a new program in order to support public museums and collections that employ scholars from Ukraine.

What the XVI International Numismatic Congress 2022 in Warsaw Discusses

June, 17. 2021
The XVI International Numismatic Congress will eventually take place in Warsaw in 2022. A round table will explore how numismatics can use virtual social networks and modern media to disseminate their activities in a digitized and globalized world.
error: