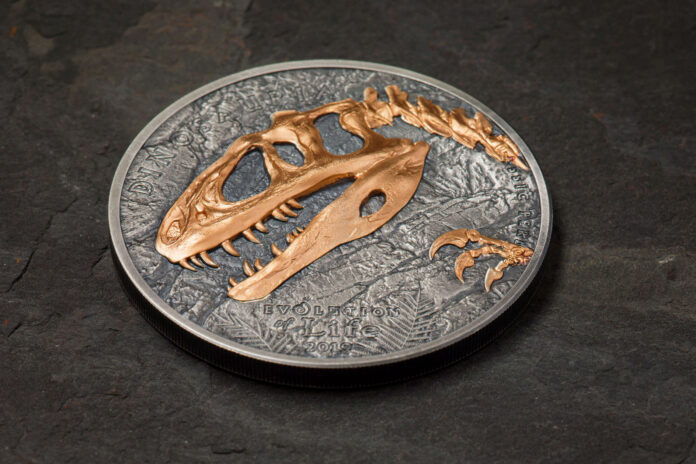 CIT Coin Invest AG has designed a new coin for Mongolia as part of the “Evolution of Life” series. The fifth edition of the series is dedicated to the “Chinese predator” Sinraptor.

The obverse features the coat of arms of the Bank of Mongolia, below, 500 togrog in Cyrillic script, in the exergue, MONGOLIA 1 oz .999 SILVER in Latin script.

The reverse features the skull and the claws of a Sinraptor; above, DINOSAURIA and JURASSIC PERIOD, below, EVOLUTION of Life 2019. While the rugged background is reminiscent of a lithic surface, the elaborately rose-gilded skeleton protrudes from the background.

The design of the gold coin’s obverse is the same, the legend was adapted and says therefore 1000 togrog and MONGOLIA 0.5 g .9999 GOLD; the reverse features the same fossil, but only its skull, below, Sinraptor, above, EVOLUTION 2019, small ammonite in front of the year.

The term “dinosaur” derived from Greek and simply means “big lizard”. Only because of the film “Jurassic Park”, these creatures, which went extinct 66 million years ago, became the epitome of prehistoric fauna.

CIT Coin Invest AG dedicated the fifth edition of its successful series “Evolution of Life” to dinosaurs. They chose a dinosaur that populated the Mongolian steppe about 160 million years ago to represent this species: The Sinraptor dongi. This “Chinese predator” – that is the literal translation of Sinraptor – was discovered only in 1993 when several fossils were found at the Shishugou Formation, which boarders to Mongolia.

The dinosaur is named after the palaeontologist Dong Zhiming, who was called “China’s Mr. Dinosaur” by the magazine National Geographic. In the context of the persecution of intellectuals during the Cultural Revolution in China, Dong had been banned from Beijing to the Mongolian border. There, he measured and mapped unexplored territories. During his journeys, he discovered a site with numerous fossils in 1975. After the opening of China, Dong succeeded in having the region protected and he prospected the promising territory together with Canadian scholars. These examinations were financed among others by Steven Spielberg, who had developed an interest in palaeontology while directing the film Jurassic Park. Eleven new species could be catalogued for the scientific world, including the Sinraptor dongi.

Given that this dinosaur measured 7.2 metres in length and weighed about a ton, it was quite difficult to adequately represent the enormous predator on the coin. Therefore, CIT Coin Invest AG’s designers decided to focus on the impressive skull. Finally, the characteristic skull bones make it possible to identify the Sinraptor as a dinosaur.

On CIT Coin Invest’s website you can find further information about the silver coin and gold coin.

In this video you can see the silver coin in detail:

You can learn more about “China’s Mr. Dinosaur” Dong Zhiming and his excavations here.

In an earlier issue of the “Evolution of Life” series, CIT Coin Invest featured the pterosaur.

The “Prehistoric Beasts” series is also dedicated to dinosaurs.