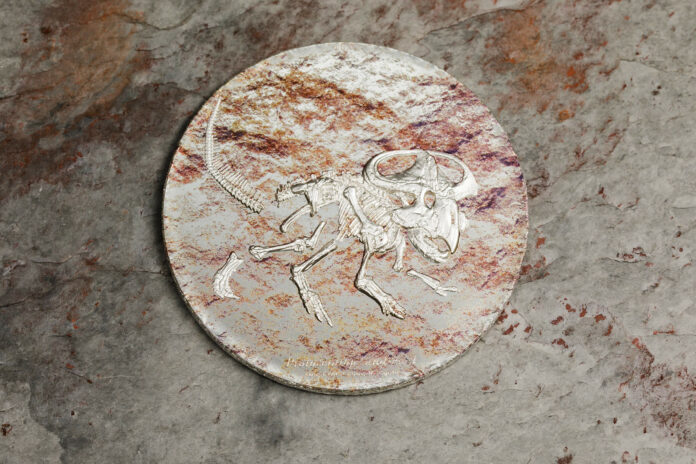 CIT Coin Invest AG has designed on behalf of Mongolia a new issue in their Prehistoric Beasts series dedicated to Protoceratops. A special technique allows for the surface to resemble sandy rocks, a material in which a famous fossile of Protoceratops was found.

The obverse depicts the emblem of the central bank of Mongolia, below in Cyrillic lettering 2,000 Togrog, in the exergue in Latin lettering MONGOLIA 3 oz .999 SILVER.

The reverse presents the fossilized skeleton of a Protoceratops; below in italics Protoceratops andrewsi, in print Late Cretaceous, Mongolia.

In 2018, CIT Coin Invest AG initiated the “Prehistoric Beasts” series with a Velociraptor mongoliensis. In 2019, this success story continues with the Protoceratops andrewsi. The two prehistoric species share a close connection.

A fossil was found in the Mongolian Gobi Desert in 1971 that shows a Velociraptor fighting a Protoceratops. This is remarkable because the find was the first evidence of the Velociraptor with its razor-sharp claws really having been the dangerous predator it is presented as in Jurassic Park. For the purpose of boosting the arc of suspense, the dimensions of the turkey-sized Velociraptor were drastically exaggerated, however. The fact that it nevertheless dared to attack the herbivore Protoceratops despite its considerably heavier weight of 400 kilograms, is proven by the fossil known as “Fighting Dinosaurs” amongst paleontologists: while the Velociraptor has rammed its claws into the Protoceratops’ head and attempts to crack open the lower abdomen of its opponent with its beak, the Protoceratops holds his opponent’s arm in his beak respectively. Supposedly, both animals were mortally wounded in this fight. The desert sand then covered them and preserved their remains.

Just like the previous one, the second issue of the “Prehistoric Beasts” series is also struck in the “Red Rock Finish”. A special technique allows for the surface to resemble sandy rocks. Smartminting technology makes the high relief skeleton stand out against its background. The coin is minted by B. H. Mayer’s Kunstprägeanstalt, Munich.

More information about the fossil is available on the Blog “Everything dinosaur”.

Learn more about this coin on the CIT Coin Invest AG website.

If you want to see a reconstruction of the fight, don’t miss this Chinese YouTube video – it shows the animals in the correct proportions!

October, 21. 2021
With the album “The Number of the Beast” Iron Maiden achieved their breakthrough in the British charts in 1982. CIT has chosen the provocative album cover for a new coin. A numismatic monument with all the trimmings.
error: