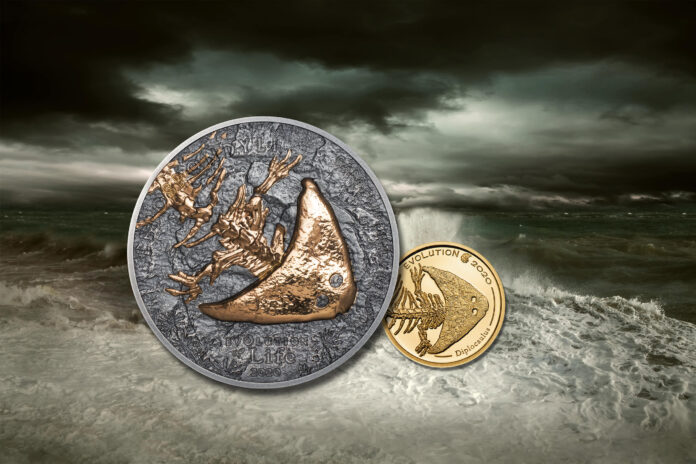 This year’s release of CIT’s “Evolution of Life” series is the salamander-like Diplocaulus which lived in the perm age around 250 – 300 million years ago. There are to versions of the coin, the 500 Togrog coin from one Onze of silver in antique finish and partially gold plated and the 1,000 Togrog in gold.

One side presents the skull and the upper half of the spine of a Diplocaulus; above it LEPOSPONDYLI and CARBONIFEROUS PERIOD, below EVOLUTION of Life 2020. While the background is rough and features typical plants of the Carboniferous period, the Diplocaulus’ skeleton stands out from the background due to elaborate plating in rose gold.

The other side features the coat of arms of the Bank of Mongolia, below in Cyrillic script 500 Togrog, in the exergue in Latin script MONGOLIA 1 oz .999 SILVER.

Regarding that side, the small gold coin is of the same design, the legend was adapted and reads 1000 Togrog and MONGOLIA 0.5 g .9999 GOLD; the first side features the same fossil, below Diplocaulus, above EVOLUTION 2020, a little ammonite in front of the year.

Over the past six years, CIT’s Evolution of Life series has gained cult status among paleontologists. The depictions’ precision amazes the experts. Coin collectors appreciate the excellent technological performance behind the elaborate finishing, which makes the fossils stand out from the rough background thanks to their plating.

Over the past six years, CIT has been using six topics to advance from Devonian ammonites to the Diplocaulus of the late Carboniferous period. During the Carboniferous period, which ended about 298.9 million years ago and to which our globe owes its extensive coal seams, the Lepospondyli evolved. The Diplocaulus with its characteristic skull is probably the best-known example of this amphibian-like group of Tetrapods, which is now extinct.

The skull’s peculiar shape, which resembles a boomerang, has puzzled scientists since it was first described in 1877. In the 1980s, South African Scientists developed a theory according to which the two tips of the boomerang improved the Diplocaulus’ swimming abilities significantly – similar to the hydrofoils of hydrofoil boats.

We know from experience that the 999 specimens of the one-oz silver coin will already be oversubscribed at the time of issue. But for all those who want to combine their passion for coins with their enthusiasm for paleontology there is the possibility to purchase one of 15,000 small gold coins. With a weight of 0.5g and a diameter of 11mm, these almost monumental looking little gold coins depict every detail of the Diplocaulus’ skull.

Further information about the coin visit the website of CIT.

Of course, you will find this issue in our online database Cosmos of Collectibles.

Curious to learn more about the Diplocaulus? Read this blog article by paleontologist Bob Bakker on the site of the Houston Museum of Natural Science on the boomerang-head amphibian Diplocaulus.

We have presented three releases of the CIT series “Evolution of Life” in CoinsWeekly until now. Check out the articles on the Ichthyosauria, the Pterosaur and the Sinraptor.

Ursula Kampmann wrote an article about dinosaurs and prehistoric motives on coins for CoinsWeekly.

June, 6. 2019
Crystal Skull is back – with the ominous Luna de Sangre issue. Centerpiece of the coin designed by CIT Coin Invest AG on behalf of Equatorial Guinea is a metallic blue, skull shaped Swarovski crystal superimposed on a blood moon.
error: