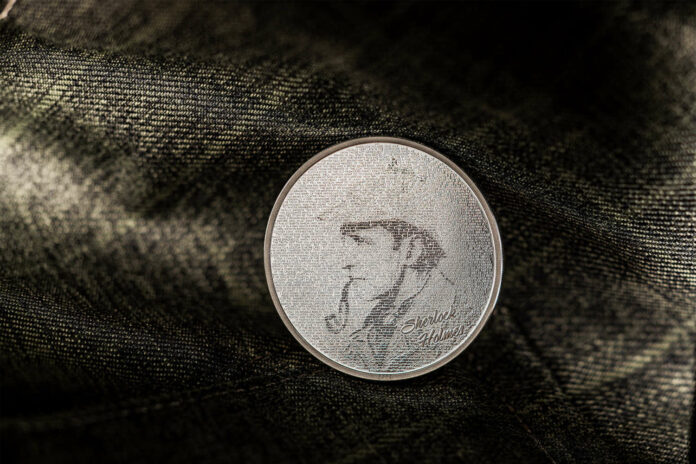 There’s a certain magic to letters: using nothing but ink, paper and a printing press, they create vivid imagines in our minds. An author whose imagination remains deeply etched in our collective memory is Arthur Conan Doyle, the inventor of Sherlock Holmes. CIT now dedicates its latest mintage to this figure. The coin has been minted with the special technique microminting at B. H. Mayer’s Kunstprägeanstalt in Munich.

One side is filled with the beginning of Arthur Conan Doyle’s novel “The Hound of the Baskervilles” in micro lettering. Due to the slightly thicker execution of individual letters, Sherlock Holmes’ portrait appears as we know it: with a pipe and a deerstalker. Below, the inscription Sherlock Holmes, on the rim, the year 2023.

The other side features the portrait of Elizabeth II, below IRB (= Ian Rank-Broadley), around it the legend ELIZABETH II 5 DOLLARS COOK ISLANDS.

Sherlock Holmes needs no introduction. Ever since The Strand Magazine published the first case of what’s probably the most famous detective of all times in 1891, half the world has known that every mystery, no matter how complicated, is solved at 221b Baker Street. “The Hound of the Baskervilles”, which ran in The Strand Magazine from August 1901 to April 1902, became the best-known Sherlock Homes story. Holmes has such a high recognition factor that even about 80 years later, one Umberto Eco could allow himself the joke of repeatedly alluding to Sherlock Holmes’ stories and quoting passages from them verbatim in “The Name of the Rose.”

With its coin Typefaces – Sherlock, CIT has found a perfect numismatic expression for the connection between printed letters and our imagination. Thanks to exquisite microminting, CIT succeeded in reproducing a large part of the beginning of “The Hound of the Baskervilles” word for word from the English original. Since some letters are slightly thicker than others, the portrait of Sherlock Holmes appears as an optical illusion. The letters become an image – the numismatic interpretation of what happens in our mind when we read.

If you want to experience all three dimensions of this coin, you have to watch the corresponding film:

If you want to check the text on the coin or just enjoy the book, Project Gutenberg offers the complete Hound of the Baskervilles.

You can find more information on the novel on this fan website.

May, 19. 2022
CIT dedicates the third issue of its successful series “Real Heroes” to all special forces of the free world and, in particular, to those of the United States. The coin features an ultra high relief, partial color printing, and microminting.
error: