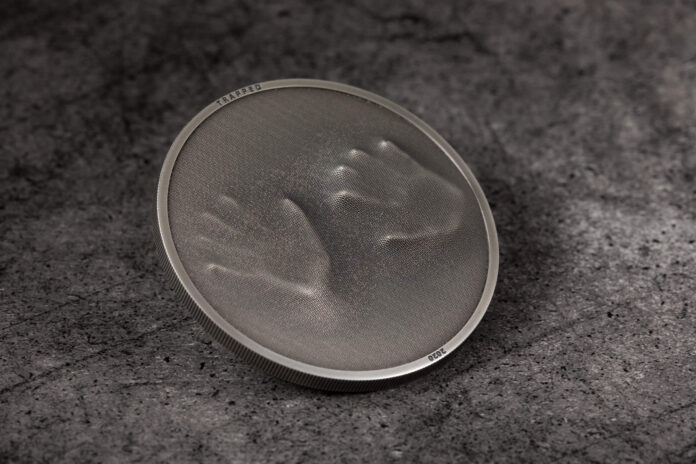 In 2019, CIT Coin Invest released its issue “Trapped”. It showed a face depicted behind a membrane recalling Munch’s “The Scream”. This was an extremely innovative collector’s coin from the artistic point of view. It was more than a mere depiction of a reality. “Trapped” expressed a feeling, it addressed primeval fears and became a huge success. The mintage of only 999 pieces sold-out very quickly.

Now, a second coin is being launched bearing the title “Still Trapped”. It depicts two hands desperately searching for reality behind an impermeable membrane. Also this issue was created by means of sophisticated technology: combining extremely precise structures on a high relief coin can only be achieved by ©smartminting. To make the depiction look even more realistic, the highest points of the relief were left bright by means of a masterly application of antique finish patina technique, making the captive’s fingertips seem to stretch the membrane to the point of rupture.

The obverse features the portrait of Queen Elizabeth II by Ian Rank-Broadley (initials: IRB); around it the name of the ruler, of the issuing nation and the denomination: 5 DOLLARS.

The reverse depicts the shapes of two hands searching for escape. They seem to be covered by a fabric clamped over the coin’s smooth edge. On the outer edge incuse TRAPPED and 2020.

“Still Trapped” is a work of art in miniature. Thanks to its design, it stands out from other objects of contemporary coinage. It is a testimony to our time, in which many people feel trapped in their daily life despite the standard of living that we have achieved.

The series “Trapped” illustrates the excellent artistic skills of the creative Team at CIT Coin Invest.

Here you can read more about the intriguing new ©smartminting technology.

Here is our announcement for the original “Trapped” coin.

October, 1. 2020
120 years ago the world’s first rollercoaster whose loop did not endanger the lives of its passengers opened at Coney Island. CIT commemorates this with a coin featuring a rollercoaster depicted on BOTH sides(!) in ultra-high relief on the coin edge thanks to smartminting© technology.
error: