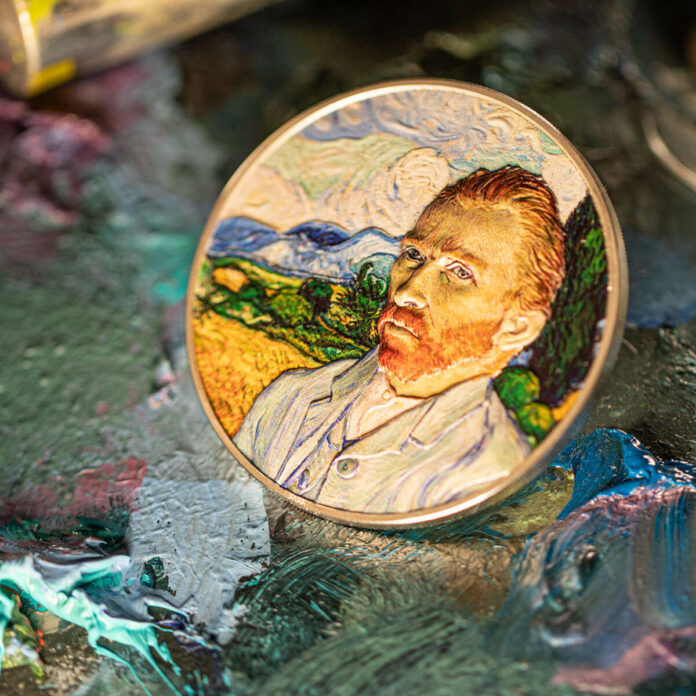 Vincent van Gogh is the first issue of CIT’s new series “Masters of Art”, which is dedicated to the greatest artists in the history of humankind and combines a self-portrait with a detail from a well-known, characteristic work. It is only thanks to state-of-the-art color printing technology that such a series can be created. Despite the coin’s diameter of only 50 mm, van Gogh’s masterful brushwork and his characteristic thick application of paint can be experienced on the colored side of the coin.

One side features a 1889 self-portrait of the artist Vincent van Gogh; in the background a detail of his painting “Wheat Field with Cypresses”, also from 1889; on the edge the year 2022.

The other side depicts a painter in Rococo style, inspired by the painting “Le dessinateur” by French artist Jean Louis Ernest Meissonier; the depicted painting presents the portrait of Queen Elizabeth II by Ian Rank-Broadley (initials: IRB); above it the name of the ruler, below the issuing nation and 10 DOLLARS. The coin is minted by B. H. Mayer’s Kunstprägeanstalt, Munich.

For the first issue, CIT chose two important works by van Gogh, which were both created in 1889. The self-portrait – one of more than 32 – is now in the Musée d’Orsay in Paris, and the depicted work from the painting series “Wheat Field with Cypresses”, a detail of which can be seen in the background, is kept at the Metropolitan Museum in New York. Both paintings were created during a time that was probably the most fruitful era of the artist’s life: in 1888/9, he developed his sunlit style in Arles, which – after his early death – made him one of the world’s most popular artists.

The other side of the coin is a technological masterpiece as well: thanks to smartminting®, it was possible to position the painting – which shows a portrait of Queen Elizabeth II, the denomination and the issuing nation – in such an way that the light illuminates it from a different angle, making the Proof finish of the portrait’s background shine. This is a completely new effect that, despite the small size of the royal portrait, focuses the observer’s attention entirely on the ruler, who celebrates the 70th anniversary of her accession to the throne in 2022.

The “Masters of Art” series is a tribute to all the artists who shaped our image of the world. And it proves that a perfect artistic implementation of innovative ideas can still be achieved today.

For further information about the coin, visit the CIT website.

Today the painting “Wheat Field with Cypresses” is in the Met Museum in New York. You can learn more about it on the museum’s website.

If you want to dive deeper into the world and work of the painter Vincent van Gogh, you may start with this documentary:

September, 17. 2020
The fifth issue of the CIT series “7 Summits” is dedicated to Carstensz Pyramid. The limited coin shows through their smartminting© technology an exact miniature version of the 4884 meters high mountain.
error: