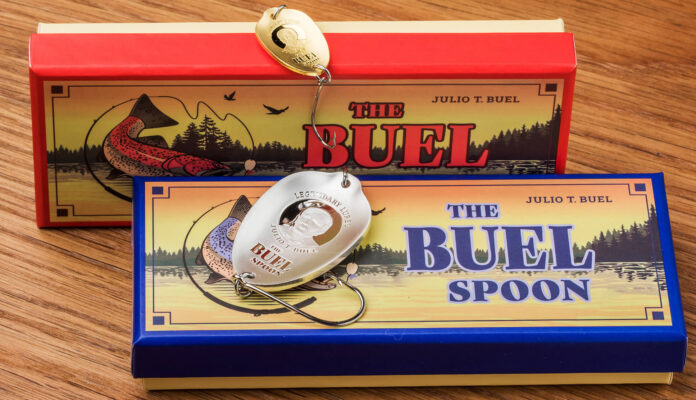 In their new commemorative coin, CIT Coin Invest combine the passion for fishing with fascinating minting technology. The coin is dedicated to the famous Buel spoon.

Both coins are shaped like the original Buel spoon.

One side presents a portrait of Julio T. Buel in a slightly deepened circle, above it the circumscription LEGENDARY LURES, below JULIO T. BUEL / THE / BUEL / SPOON.

The other side features in a slightly deepened circle the portrait of Queen Elizabeth II by Ian Rank-Broadley (initials: IRB); around it the name of the ruler, the denomination and COOK ISLANDS 2020; above it the weight, material and fineness.

On 6 April 1852, J. T. Buel obtained the first patent that was ever issued in the United States for a fishing lure. At that time, the revolutionary of recreational fishing had already gained a lot of experience with the production of lures: when he was still a kid, he invented the Buel Spoon, which was to become world famous. Legend has it that Buel was fishing one day and accidentally dropped a spoon into the water. The big trout he wanted to fish seemed to be much more interested in the spoon than in the actual lure. So Buel hooked another spoon from his mother’s kitchen, converted it into a lure and fished the huge trout he had always wanted to catch.

Fact is, that this first issue of Frank Forester’s well-known handbook “Fish and fishing of the United States and British provinces of North America” was published in 1848. The author spoke highly of the Buel Spoon and thanks to this recommendation, J. T. Buel’s fishing shop in New York became a well-known address, where the inventor himself sold the Buel Spoon in the typical cardboard box until shortly before he died in 1886.

CIT Coin Invest set a numismatic monument to this icon of fishing by creating two commemorative coins shaped like the original Buel Spoon. This could only be achieved thanks to an elaborate minting technique enabling CIT Coin Invest to imitate the curved surface of the lure. Thus, the Buel Spoon is not only a wonderful gift for coin collecting sport anglers. It’s also an interesting collector’s item for all those interested in technologically innovative issues.

While the silver commemorative coin comes in a blue card box reminiscent of the fishing lure’s original packaging, the slightly smaller gold version of the Buel Spoon is kept in a red box.

You can find out more about the silver commemorative coin on CIT Coin Invest’s website. Of course, they have also further information about the gold version.

And if you want to know everything about fishing with spoons, watch this video.

If you want to check for interesting coins of your collecting field, you can find many new issues in our Cosmos of Collectibles database.

Of course Cosmos of Collectibles has also the Buel Spoon!

September, 21. 2022
CIT has issued a commemorative coin where the growth rings of a tree are combined with a human fingerprint: a tribute to the interconnectedness and eternal cycle of all life on Earth executed with utmost precision.
error: