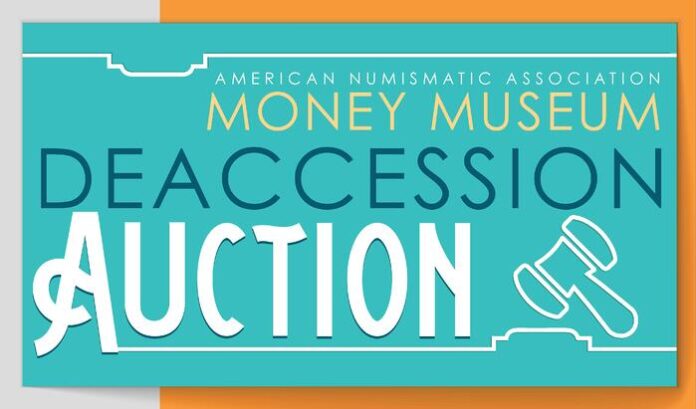 The Money Museum, operated by the nonprofit American Numismatic Association in Colorado Springs, Colo., announced that it will soon be selling – or deaccessioning, as the practice is known – select items from its collection that are redundant, mostly low-value specimens already well represented. The sales will be conducted on eBay and are anticipated to begin in June. No specimens from the Money Museum’s permanent collection will be sold.

The auctions will focus on world coins, paper money, tokens and medals, though a few American duplicate coins, mint sets and numerous stock certificates also will be included. The auction project will eventually expand to duplicate books and catalogs from the ANA Library and ANA-branded objects from the Money Museum store.

The American Numismatic Association’s collection, formed originally in 1928, was stored with the Curator of Numismatics at the Smithsonian Institution until 1966, when the ANA located its headquarters in Colorado Springs, creating the permanent home for the collection and allowing for the establishment of the Money Museum. Since that time, the collection has grown to encompass hundreds of thousands of objects, many of which are multiple duplicates of those needed to meet the Museum’s educational mission.

According to Money Museum Curator and Director Doug Mudd, only duplicates are being considered for deaccession. “This will allow the ANA to clear space for future objects, while the revenue generated will help support our ongoing mission of promoting and advancing the hobby of numismatics,” says Mudd.

“We believe that the fairest method to sell our duplicate specimens is through open auctions with the widest possible reach,” Mudd explains. “To meet that goal, we have chosen eBay to be our primary vehicle for selling the deaccessioned material. eBay not only has an expansive online auction platform, but its low overhead costs and administrative features will streamline the day-to-day logistics of running auctions.”

The eBay auctions will allow for low starting bids and no reserves to ensure that collectors of all means have an opportunity to obtain objects from the Money Museum collection. According to Mudd, “this ensures that, as a nonprofit, we are approaching the project with transparency and fairness. Ultimately, the market alone will dictate the final price of any object.”

ANA members will be able to acquire deaccessioned objects at a discounted price as a benefit of membership. According to Mudd, the deaccession auction project is expected to launch in June 2021 and will be a work-in-progress for the next several years. “Ultimately, we are doing what is right for our members and our collection,” he says.

Check out the online presence of the Money Museum or read more about their wide range such as virtual exhibitions.

For further information, visit the website of the ANA.

As the Covid19 pandemic has threatened many museums all over the world the practice of deaccessioning has become more common and even accepted in a limited way by ICOM.

October, 1. 2020
The NYINC 2021 has been canceled. The board stated this seemed the only responsible decision in light of the Covid-19 pandemic and related requirements and restrictions for participants. However, the 2022 convention has already been scheduled.
error: