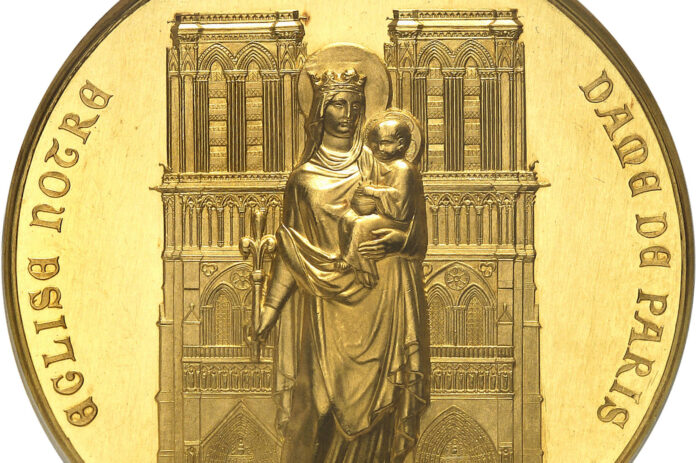 On 18 and 19 November 2019, Numismatica Genevensis’ two auctions will be held in Geneva. Lot No. 706 is an object of particular interest. It is a gold medal minted on the occasion of completing the restoration works at Notre-Dame de Paris in 1864.

It is highly probable that the architect Viollet-le-Duc himself was awarded this medal by Napoleon III in recognition of his services. Dr Alain Baron, the founder of Numismatica Genevensis, seized this opportunity in order to help the cathedral Notre-Dame de Paris a second time by selling the medal. All commissions received from the sale of this medal – which has a starting price of CHF50,000 – will be donated to the restoration project of the Fondation Notre Dame.

Why the First Restoration of Notre-Dame Changed Our World

When Napoleon’s reign ended, France had to pay reparations amounting to 700 million francs. The country paid them at unprecedented speed. To be able to do so, it restructured its economy at breath-taking pace. France, which had previously been a country mainly made up of farmers, became one of the pioneers in terms of industrialisation.

Of course, this had an impact on the large cities, especially on Paris. The amount of people moving into the city increased constantly as did the proportion of the medieval city centre disappearing in order to make room for modern tenement blocks, factory premises and administrative buildings. Parts of buildings that had been there for centuries were demolished regardless of their historical and artistic value.

On his daily promenades, the writer Victor Hugo observed how his city changed. The tower of Saint-Jacques-de-la-Boucherie housed the factory of a rifle bullet manufacturer. There were empty barrels stored in the nave of Saint-Pierre-aux-Boeufs and a theatre group was rehearsing in Saint-Benoit. Notre-Dame was in such a bad state of repair that it was planned to demolish parts of it. Horrified, Victor Hugo wrote an essay with the title “Guerre aux Démolisseurs” – without much success.

In 1828, a publisher from Paris approached Victor Hugo and asked him to write something in the style of the extremely successful Scottish writer Walter Scott. An amazing opportunity for Hugo to win over the broad public for his cause. Therefore, Quasimodo is not the actual hero of the novel “The Hunchback of Notre-Dame” – it is the church and the medieval city of Paris, where the hero has to live through his adventures.

In fact, the highly successful novel managed to bring about a change in the mindset of the Parisians. They understood that the dilapidated church of Notre-Dame was something worth preserving for posterity. In 1844, it was decided to renovate the magnificent church. Whereas Georges-Eugène Haussmann was commissioned by Napoleon III to create a modern road network, the first monument men in history, Viollet-le-Duc and Prosper Mérimée, made sure that monuments worth preserving were not demolished but restored.

The concept of the protection of historical monuments spread from France all over the world. We have to thank Victor Hugo, his hunchback and the first restoration of Notre-Dame de Paris for the fact that our medieval districts in Europe have not been entirely demolished to make room for modern buildings.

In 1844, Eugéne Viollet-le-Duc presented his planning of the renovation works. The works were to cost almost 4 million francs. The politicians were shocked and cut the budget. However, in 1850, the approved budget had been already used up even though no crucial work had been carried out by that time. All in all, the National Assembly of France had to approve a sum of more than 12 million francs until Notre-Dame was reconstructed in the way we know it today. By the way, most of the statues stem from the 19th century. The gargoyles with their bat wings and abhorrent faces, too, were created during the restoration carried out by Viollet-le-Duc.

In 1864, Paris celebrated the end of the renovation works. The medal offered by Numismatica Genevensis was minted on this occasion. The legend on the reverse proudly mentions all great kings responsible for the renovation works: Started under the reign of Louis the Young, completed under the rule of Philip Augustus, expanded during the reign of Saint Louis and Philip the Fair. However, the name of the emperor ruling at the time of the renovation works is written in the largest letters: Napoleon III. Together with his minister of justice and culture, Pierre Jules Baroche, he was responsible for the construction works. Notre-Dame was newly consecrated by Georges Darboy, archbishop of Paris. However, the architect was Viollet-le-Duc. By renovating the cathedral, he created an eternal monument for himself.

This Heritage Is a Responsibility

As proud as the responsible politicians might have been, Notre-Dame does not belong to them but to all French people and to the entire world. Notre-Dame symbolizes internationally that we must protect the pieces of art that stem from our past in order to preserve them for future generations.

Numismatica Genevensis is aware of this responsibility and wants to contribute with its small donation to this great collective work. Regarding the sale, Christophe-Charles Rousselot, director of the Fondation Notre Dame, said: “Anything could happen! Imagine that the lucky buyer might donate the medal to the Cathedral Treasury Museum, which is due to reopen soon, in a gesture of benevolence and in the interests of all…  This is a magnificent project which we scarcely believe possible. It is a beautiful symbol of loyalty to the history of the building and to the hopes of all to be able to enter the Cathedral again soon.”

On our website you can read a comprehensive auction preview.

Learn more about the foundation on the website of Fondation Notre-Dame.

And this link takes you to the website of Numismatica Genevensis.

January, 16. 2020
There are very few power seekers of the past that are admired in today’s world as much as Napoleon. One of the reasons for this is his way of self-portrayal. We tell the story of one of his medals. It belonged to Napoleon himself and will be offered in Künker’s Berlin sale.
error: