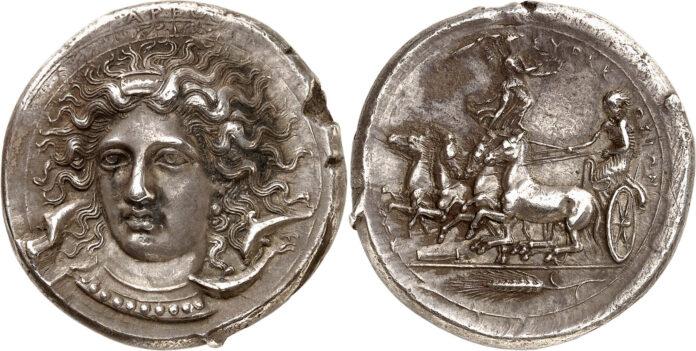 The Royal Way of Collecting

On 18 November 2019, Numismatica Genevensis SA holds its auction 11 – “The Royal Collection” – and its auction 12 with extraordinary numismatic rarities. No matter which coin, which medal of the two catalogues you look at, all of them are of the finest quality, of exquisite engraving and of greatest artistic value.

Numismatica Genevensis believes that having a sophisticated hobby like collecting precious coins and medals is a sign of an intellectual elite. Thus, also the new catalogue offers selective customers the most beautiful pieces of the numismatic world that can be bought for money.

The Most Beautiful Greek Coin in Private Possession

Auction 11 starts with a sensation. The famous tetradrachm from Syracuse with a splendid front view of the nymph Arethusa created by Kimon between 405 and 400 is on offer. The coin’s design already impressed its contemporaries. The production of the coins of Amphipolis, Larissa, Rhodes and Tarsus would not have been possible without studying the artistic features of this model. The fully centred, well struck and perfectly preserved piece entered the market for the first time as part of the Käppeli Collection.

And this is only the beginning! Auction 11 and 12 comprise a wealth of rarities from the Greek world. The most spectacular piece is probably one of the two known Egyptian silver bars that could revolutionize our knowledge about the beginning of coinage. The piece weighs 41.55 g and was marked with the name of Tutankhamun. With regard to its appearance and its function, it is therefore identical to the early electrum staters of Asia Minor. Do we have to accept that the beginning of coinage happened several centuries earlier than we thought it did?

In ancient Rome, gold coins were more than a simple means of payment. They were part of the representation of the emperor when they were distributed to soldiers or private persons on the occasion of huge feasts of generosity. Therefore, particularly great effort went into their production. As a result, gold coins from the time of the Roman emperors feature very often the most splendid portraits Roman die cutters were able to make. Numismatica Genevensis’ catalogue 12 offers some especially outstanding examples.

Abstract Art from the Byzantine Empire

It takes the knowledge about works of art like those of Picasso in order to truly be able to appreciate the Byzantine die cutter’s abilities of abstraction. The bust of consul Anastasius featured on the solidus from the Hunt Collection offered by Numismatica Genevensis is a gorgeous piece for all those who cherish modern art.

Numismatica Genevensis: “The” Specialist for Unique Coins from the Islamic World

If you want to understand Islamic coins, you have to invest a lot of time into studying them. They reveal their secrets only to those capable of reading the Arabic script and familiar with the history of the Islamic world.

Numismatica Genevensis attaches much importance to documenting this numismatic field just as carefully as the coins and medals of the western world. And it is worth it. The auction house regularly receives consignments of outstanding rarities.

In 2019, there is an example of the first gold coins of the Islamic world among these rarities: A creating imitating the pattern of a Byzantine solidus, probably from Damascus. Solidi like this one dominated the coin circulation in the Near East. Therefore, it was only natural to use them as models when it came to the production of a region’s first own coinage. However, the Umayyads obviously paid tribute to their religion: They removed the crosses from the coin’s effigy.

At least as impressive is a piece from Basra that was inspired by a Sasanian drachm and that features a ruler depicted in the Sasanian style on the obverse. The reverse is dominated by the image of a praying caliph standing between two servants with his hands raised up.

The third example that we want to present here was minted in the name of “Umm Jafar”, a woman that is known as Zubaidah in the western world. She was the main wife of the fifth caliph Harun al-Rashid and mother of his heir to the throne. Zubaidah was a pious woman, who repeatedly made pilgrimages to Mecca and provided huge amounts of money to facilitate the Hajj for other pilgrims by means of construction works. Zubaidah was a great supporter of the arts and a talented poet herself, therefore it is no surprise that the western world likes to think of her as some kind of Scheherazade. The fact that both her husband and her son ordered that her name be engraved on the coins shows how appreciated and respected Zubaidah was within the Muslim world.

Several examples of heavy gold medallions of the Buyid, the Ghurid and the Safavid dynasties illustrate a custom that is also common in the West: Rulers gave impressive gold multiples to those they wanted to honour with their favour. These pieces were also used to store currency reserves in the treasuries more easily. It becomes clear that collectors of gold multiples should read the section on Islamic coins very carefully.

The House of Habsburg would have probably been nothing but a joke to the rulers of the Moghul dynasty. Their empire in northern India became the epitome of power, glory and luxury. Numismatica Genevensis is proud to offer a wealth of rarities from this dynasty in its auctions 11 and 12. Among them is the greatest collection of the famous gold mohurs of Jahangir with zodiac signs that has ever been offered.

The oldest example of this section is the only dated gold coin of the Mughal Empire’s founder Babur. This descendant of Timur and Genghis Khan was the first to dare waging a battle with cannons and guns in North India. He attacked Kandahar in 1522. The coin offered by Numismatica Genevensis was minted in 1524. In 1526, Babur defeated the Delhi Sultanate and founded the Moghul Empire.

His best-known successor is probably Akbar, whose policy of tolerance gathered representatives of all religions for talks in the Diwan-i-Khas at Fatehpur Sikri. He is considered to be the founder of a syncretic religion that he called Din-i Ilahi (=Religion of God). One part of it was a new calendar and Akbar’s mohur minted in the form of a mihrab was dated according to this calendar.

Akbar’s oldest son ascended the throne in 1605. Just like his contemporary in the western world, Emperor Rudolf II, he was enthusiastic about astrology. Coins with his portrait – Numismatica Genevensis is able to offer a small series of them – show the zodiac sign of the lion in combination with the sun.

The impressive series of mohurs with the images of zodiac signs originated from an idea of Jahangir himself. We know this from Jahangir’s diary. He wrote: “Previously, it was common to engrave my name on one side of the coin, on the reverse the name of the place, the month and the year of the reign. It occurred to me that instead of the month they should use the depiction of the constellation of the month… This invention is my very own and has never been used before.”

Auction 12 offers gems from two collections of Renaissance medals. The Alain Moatti Collection of German Renaissance medals and three showpieces from the APW Collection. There is no doubt that the gold medal made by Jacopo Nizzola da Trezzo featuring the portrait of Mary Tudor, who went down in history as “Bloody Mary”, is the highlight of this section.

The medal with the portrait of Mary Tudor weighs 151.80 g of gold. Compared to this medal, the 10 ducats pieces of the Habsburgs weighing 35 g seem to be lightweights. But these coins, whose production was ordered by the emperor so that he could use them as gifts, are of perfect condition and masterworks of the art of engraving.

Numismatica Genevensis is offering three unique lots for collectors of Habsburg gold multiples: The first one is a set of four coins featuring the three Emperors Maximilian I, Charles V and Ferdinand I on the obverse. Second is an off-metal strike in gold of the hunting-themed taler – probably the second specimen known – and the third one is a piece commemorating the visit of Emperor Ferdinand III at the mines of Schemnitz.

So far, we talked about coins of financial spheres that are unattainable for “normal” collectors. Now we turn our attention to objects with estimates in the three- and four-digit range.

Numismatica Genevensis is pleased to offer a collection of European crown coins that stands out for the variety, the quality and the beauty of the objects it contains. Everyone who loves coins of excellent grades has no choice but to be thrilled!

And this is only one example of the many interesting French coins auction 12 has to offer!

For the Reconstruction of Notre Dame!

Una and the Lion, Russian family roubles and much more…

Therefore, you shouldn’t miss out on checking out both catalogues! Coin lovers will be amazed!

And you can see a selection of highlights in some films presenting this auction.