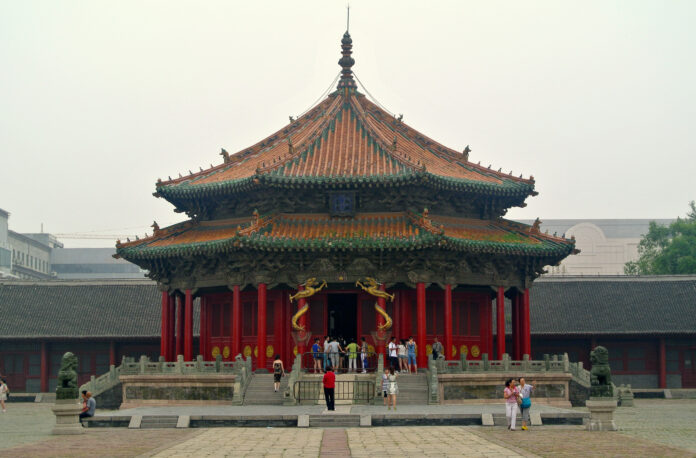 The afternoon sky is deep blue, the sunshine gold as I stroll through Shenyang, China. It’s a forty-minute walk down Dadong Road to downtown from my hotel and there is always something to see – like the Shenyang Mint’s Qing Dynasty-style gate. Or the giant, tilted concrete teapot that pours water from its spout. This fountain, a monument to China’s national beverage, advertises the city’s tea market. Inside the market are shops that brim with bins and boxes of fragrant dried leaves.

I cross the street and pause to admire the produce at a fruit and vegetable market: strawberries, tangerines, cut watermelons, rose red apples. Did you know that China is the world’s largest apple producer? It grows more than twice as much as the runner up, the E.U. An elderly woman sits at a little table and peels pineapples. The fruit’s skin spirals into a helix as it separates from the juicy interior. She glances up at me. I smile in reply.

Dadong Road follows a straight course past more shops and offices to the Imperial Palace. This walled compound was the Qing Dynasty’s first capital. The “Forbidden City” here, although smaller than Beijing’s, is also a United Nations World Heritage Monument. During the time that Shenyang was China’s political capital, it was also its economic hub. That story – and much more – is the subject of the Shenyang Financial Museum.

A quick turn from Dadong Road onto Chaoyang Street leads to the Financial Museum’s main entrance. Most visitors enter this way although the official address is on a side street, No. 48 Shaoshuaifu Alley.

Inside, light from above gently passes through an Art Deco-style stained-glass window. It falls upon a gentleman in an elegant, fur-lined tweed coat seated on a bench. He reads his newspaper and waits. Nearby, a grandmother, supported by two young women, leans on a wooden staff topped by a carved dragon’s head. A row of customers leans intently over the polished wood counter. Copper bars separate them from the clerks, but their eyes are fastened on the lightning-fast abacus calculations of their accounts. Welcome to 1930’s Shenyang China.

Abruptly, one of the young women steps away from the old lady and smiles as she examines her cell phone. The “grandmother” and “sister” do not react. Neither do the tellers, nor their customers. They can’t because they are all made of wax and this bank lobby is the Shenyang Financial Museum’s welcoming exhibit.

The museum fills the massive Frontier Bank building, a long-gone financial institution. Founded in 1919, it helped shape the course of China’s economy during the 1920’s and 1930’s. After 1924, the main owners of the bank were Marshal Zhang Zuolin and his son Zhang Xueliang. The father, who began his career by robbing travelers, rose to become warlord of Manchuria, the old name for Northeast China. He was a ruthless, but practical, man. In June 1927, he ascended to Grand Marshal of the Republic of China, only to be assassinated a year later by the same Japanese-backed troops he collaborated with prior to Japan’s invasion of Manchuria.

While they controlled three provinces – Liaoning, Jilin, and Heilongjiang – Zhang and his son tried to dominate both the politics and economy of Northeast China. The Frontier Bank headquarters in Shenyang (designed in Germany and finished in 1930) is just a stone’s throw from the Zhang mansion. It stands as a fortress of financial ambition.

95% of the bank’s capital belonged to the Zhangs, effectively making it their private bank. It was one of Northeast China’s largest banks. Besides handling typical functions like taking deposits, lending and exchanging currency, Frontier Bank issued money and acted as the national treasury’s agent.

A door in the corner leads out of the lobby. I read, “Since Pre-Qin period (2,100 B.C.-221 B.C.), Northeast China has had close economic ties and commodity and currency exchange ties with the central plains. The financial development history in this region can be reflected by the main currencies that had been current and unearthed here over the past 2,000 years.”

Arrows point the way through three floors of exhibit halls. These examine how the province’s medium of exchange evolved from ancient spade and knife money to coins and paper currency and finally to commerce in the People’s Republic of China, including credit cards. One highlight is a gleaming two-story tall gold prayer room with a huge statue of the God of Wealth. In this chamber favored Frontier Bank clients could beseech Heaven to favor them. It is still very popular with visitors, who kneel, pray and leave offerings.

Up on the top floor are two rooms of special interest to coin collectors; the Shenyang Mint section. This mint is China’s oldest operating mint. During the late nineteenth century there was an urgent need for new mints in China. As foreign trade expanded, a flood of silver coins from other nations came into circulation. Their values varied and merchants were obliged to test and certify each coin’s worth with a chop mark. To establish a nationally accepted currency was a priority for the business community. In 1886, the Qing government began a mint construction program. Its goal was to modernize the money supply with machine-struck instead of cast coins.

One of these mints was placed in a city called Mukden in Manchu, or Fungtien in Mandarin. Today we know it as Shenyang. The Mukden, or Fungtien, Machinery Bureau opened in 1896. It was Fungtien (now Liaoning) Province’s first factory with modern machinery and it ended the region’s coin shortage. For instance, mint records show that between 1913 and 1917 almost 12 million one Yuan silver coins, plus millions of lower denomination pieces, were struck there. Examples are on display here.

It was not always easy going– warlord Zhang Zuolin even closed the mint down for three years in the 1920s and fired all the coin production staff. But, the Shenyang Mint reopened and endured through the Republic of China, the fall of Northeast China, Kuomintang rule, the Northeast Liberation War and finally the establishment of the People’s Republic of China.

In the early years of the People’s Republic, the Shenyang Mint played an important role. Rather than coins, it mostly produced the bank notes that the new nation needed. This currency is now highly appreciated by collectors. The mint also became part of China Banknote Printing & Minting Corporation (CBPM), the branch of the Chinese government that issues paper money and coins.

On a museum wall hangs a photo from the early days of the mint. It is of the main office building; a boxy, two-story red brick building designed in the 1930’s. It is not much changed in appearance today, except for the logo of China Banknote Printing & Minting and the red flag of the People’s Republic of China above the front door. The little circular park out front is replaced with a fountain adorned by a scholar’s stone.

The Shenyang Mint has a tradition of employing outstanding artists. This department is responsible for many of the country’s best-known coin designs since 1978. That includes the 1982 Lunar Dog that won a “Coin of the Year” design award and the 1985 gold Panda coins. These were designed by Mr. Wang Fu De. He was the first Shenyang Mint artist to achieve international recognition. On one wall hangs a large image of a 30th Panda Coin Anniversary 5 oz. gold coin designed by Ms. Chang Huan.

The museum showcases other modern coins struck at the Shenyang Mint – like Pandas. There are also Lunar and Olympic coins, as well as circulating issues. One exhibit illustrates and explains some of the security features of Panda coins. Many innovations in coin security are products of the Shenyang Mint’s research department. Its anti-counterfeiting and minting technologies have been patented at the national and international levels.

More Wax Figures – A Mockup of the Shanghai Stock Exchange!

The Shenyang Financial Museum still has one more surprise up its sleeve. Right before the exit, the hallway suddenly opens onto a life-size mockup of the Shanghai Stock Exchange trading floor. It includes a trading post, electronic information screens and monitors. All that is missing are floor brokers made of wax like those in the bank lobby exhibit.

Speaking of the bank lobby, whatever happened to the Frontier Bank? In 1931, the Japanese seized control of all banks in Northeast China. The branches of the Frontier Bank there were absorbed into a puppet bank. Zhang Xueliang tried to continue its operations, first in Tianjin and then in Shanghai, but Frontier’s doors closed for good in 1937. That’s not the end of his story, though. The “Young Marshal” is best remembered for his arrest of Chiang Kai-shek to force the creation of a united front with the Communist fighters against Japan.

As I walk back along Dadong Road a bicycle suddenly pulls up in front of me. It’s one of my friends! She asks me where I have been and I tell her about the Financial Museum. She admits she has only been to the bank lobby. We both laugh. There is always more to see in Shenyang.

The author of this article, Peter Anthony, created a website on panda coins – click here to find out more.

For impressions of the Chinese numismatic market, follow Peter Anthony on his trip to the Beijing International Coin Expo, of course, the Shenyang Mint was there, too.

December, 16. 2021
Over one hundred Byzantine gold coins and coin imitations have been found in China. A colloquium in Changchun asked the question, how these coins came to South East Asia.
error: