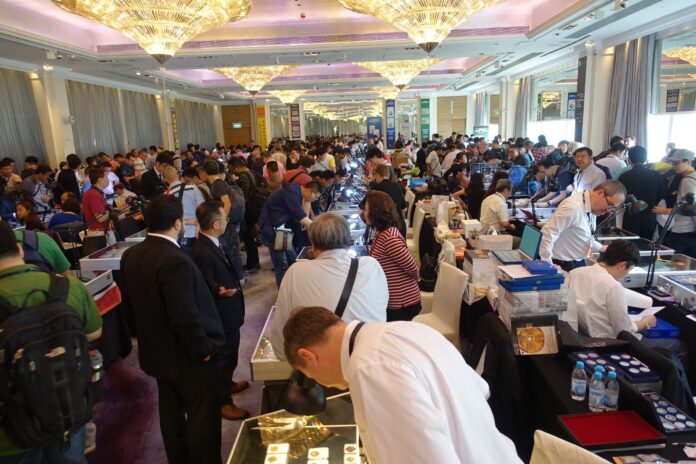 Let us begin by confusing everyone first: there is not only one coin convention in Hong Kong, there are several of them. And in order to utterly baffle any foreigner, some of them happen one immediately after the other. Why? Well, there are some internal and probably very decisive reasons behind all of this, which a foreigner or newcomer to the Asian market cannot (and doesn’t want to) understand.

The bottom line is: the Hong Kong International Coin Convention & Antique Watch Fair (HICC), which takes place at the Holiday Inn Golden Mile Hotel, is the oldest one of the events, as it can look back on a 37-year tradition. This convention is only partially dedicated to coins. Watches have made up an increasingly large part of the event for several years now. In addition, there is the Hong Kong International Numismatic Fair (HKINF) at the Mira Hotel, which is organized by the Hong Kong-based Eternity Numismatic Company. It will take place next from June 28th through June 30th, 2019. And, last but not least, there is the Hong Kong Coin Show (HKCS), which is also held at the Mira Hotel. This is the convention I attended – and you can do the same this summer, as the next HKCS is scheduled for August 23-25, 2019.

The HKCS is organized by several people at once, all of whom work in the Chinese market: namely Stack’s Bowers & Ponterio, Spink, Coin in Coin – an important Guangzhou-based Chinese coin dealer, and shouxi.com – a Chinese online portal, which offers plenty of information about coins, but also the possibility to buy and sell coins.

As was to be expected, the organization of the event was excellent. There’s no other way to put it. After I had registered for the convention, I immediately received a detailed and extremely friendly email with tips and suggestions on how to best organize my stay. Needless to say, the badge required for attending the convention was ready to be picked up upon my arrival.

And that was in no way a special treatment just for me. Many attendees from Europe spoke highly of the same efficiency. For example, after a new regulation had been implemented the previous year which would require foreigners to obtain a special permit to sell coins, the event organizers found a small group of locals, all of whom spoke English fluently (and of course Chinese too), in next to no time and behind the scenes.

Behind every table, one of said helpers was seated who was in charge of officially writing up the invoices. Some of those assistants sat behind a few tables this year as well. Others had applied for a sales permit in time and had experienced no difficulty in obtaining it.

Dealers from all over the world love this coin convention because it’s so easy to attend. Numerous people reported that the customs clearance of coins is a piece of cake. Hence, attendees from Hong Kong and China were accompanied by dealers from 27 other countries, namely Australia, Brazil, Canada, France, Germany, Great Britain, Indonesia, Italy, Japan, Jordan, Korea, Macao, Malaysia, Monaco, Nepal, New Zealand, the Netherlands, Paraguay, Portugal, Russia, Sweden, Switzerland, Singapore, Spain, Taiwan, Thailand and the USA. More than 110 dealers had set up booths.

And that number only includes the exhibitors. Considerably more dealers were out and about in the convention hall. They came from surrounding countries and used this opportunity to fill their stock. All those present at the convention – if they even found time to talk to me – expressed delight over how much they had already sold in Hong Kong, either at the present convention or at an earlier one. The fact that buyers did not hold back on purchasing expensive pieces as well received particular praise. However, every now and then someone would also utter that this year’s turnover was not quite as good as in previous years. It was said that local dealers had become more careful in their purchases and had shot their bolt on the first day already, which resulted in the second and third day being considerably more calm.

You could easily tell that two large international auction houses, both of which are very experienced in US-American coin conventions, namely Spink and Stack’s Bowers & Ponterio, are co-organizers of the convention. Because this convention copied the American models: The exemplary Chinese and English program brochure that contains a list of exhibitors and an abundance of numismatic articles, the Early Bird Pass, the auctions held in the context of the convention and numerous seminars – it all looks a little bit like New York, Chicago and the ANA.

There was one decisive difference, however: those who were interested in participating in the seminars had to sign up early in advance. The number of attendees was limited – and consequently, the seminars were booked solid long before the convention even began.

The fields of interest of dealers and collectors in Hong Kong

The thirst for knowledge is big among dealers and collectors alike. And their interest is not limited to Chinese coins and medals with lucky numbers. In Xi’an, for example, you will find the coin dealer “All About German Coins” – an almost unbelievable name considering it’s based in China. Representatives of Gorny & Mosch were happy about having sold expensive ancient coins as well.

And the shooting medals offered by Marcel Häberling attracted attention in Hong Kong as well.

Overall, buyers who attended the convention in Hong Kong were interested in everything, as long as it could be turned into profit. Anyone who wants to convince buyers here, has to assure them even more persuasively than in the U.S. that the price they pay will very likely yield them a considerable gain in the future. In this setting, numismatic education does not refer to the conveyance of historical context but to the desire to make market connections transparent.

Of course, there is some interest in history as well, but it definitely takes the backseat for collectors in Hong Kong. And the majority doesn’t speak English, but only Chinese, which makes it somewhat difficult to communicate at times. Although a cell phone that shows the image of the desired coin, a note pad and pencil serve well in price negotiations.

A must-go for everyone looking to network

Needless to say that the convention also offered excellent possibilities to make new acquaintances and to meet dealers and collectors with whom you can and want to collaborate later on. The convention is a great place for that. And I am certainly in a position to make that judgment. There will be some exciting collaboration in the near future with many of the people I met in those three days …

You definitely will have something to look forward to, if you are interested in China!

This link will take you to the Hong Kong Coin Show website.

The convention takes place at the Mira Hotel Hong Kong.

The incredibly Hong Kong Museum of History is only a 15-minute walk away. Anyone who is interested in economic history, definitely has to visit this museum!

And if you would like to combine a visit to the coin convention in Hong Kong with the one in Singapore, we recommend you read our report on the coin fair in Singapore.

How Can You Realize a Coin Show During a Pandemic?

May, 27. 2021
In 2020 nearly all coin shows were cancelled due to the Covid19 pandemic. One of the first to be held again was the 70th Collectorama Show in February 2021. David Lisot was there and interviewed Edward Kuszmar about this experience.
error: