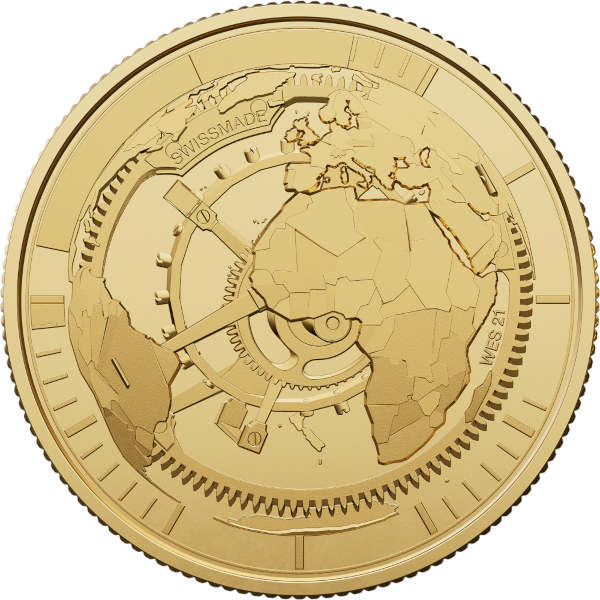 On 29 September 2022, Swissmint will launch the new special coin Switzerland’s watchmaking industry “Timemachine”. It is the first gold coin from Swissmint with a face value of CHF 25 to enter circulation. The importance of the Swiss watchmaking industry and the worldwide popularity of its products are symbolically represented on the coin with a watch movement and globe.

The beginnings of watchmaking in Switzerland are closely linked to the Huguenot religious refugees who came to Geneva in the 16th century and brought their craftsmanship with them. From Geneva, known locally as the city of Calvin, watchmaking spread all over Switzerland. Today, the Swiss watchmaking industry exports its products all over the world and is one of the most important sectors of industry and commerce.

The obverse of the 25-franc “Timemachine” gold coin shows a clock face and the cogs of a watch movement with the globe in the center. Switzerland is prominent to show the importance of the Swiss watchmaking industry and the worldwide presence of its products. On the inner edge of the large cogwheel, SWISSMADE is indicated in capital letters at 11 o’clock and WES 21 at 3 o’clock for the Biel artist Remo Lienhard, who is responsible for the design of the special coin. The surface of the obverse is slightly domed.

On the reverse, the theme from the obverse continues and the story is developed. It features the words CONFOEDERATIO HELVETICA, the year of minting 2022 and the mint mark “B”, as well as the value “25 FR”. In the middle of the reverse is another clockwork cogwheel, with a compass rose in the center. Instead of the abbreviations of the compass points, the letters W, E and S as well as the number 21 represent the artist.

The new commemorative coin is available in a limited editions in the Swissmint Shop as well from some coin dealers and banks.

And if you are interested in minting technology, you will find a lot of in-depth explanations in our background articles at Cosmos of Collectibles.

In this video you can learn “How a Mechanical Watch Works”:

September, 12. 2019
On 12 September 2019, Swissmint will conclude this year’s coin programme of Switzerland with the new “Furka Pass” silver coin, the second in the three-part Swiss Alpine passes coin series, and with the 2019 Christmas coin set.
error: