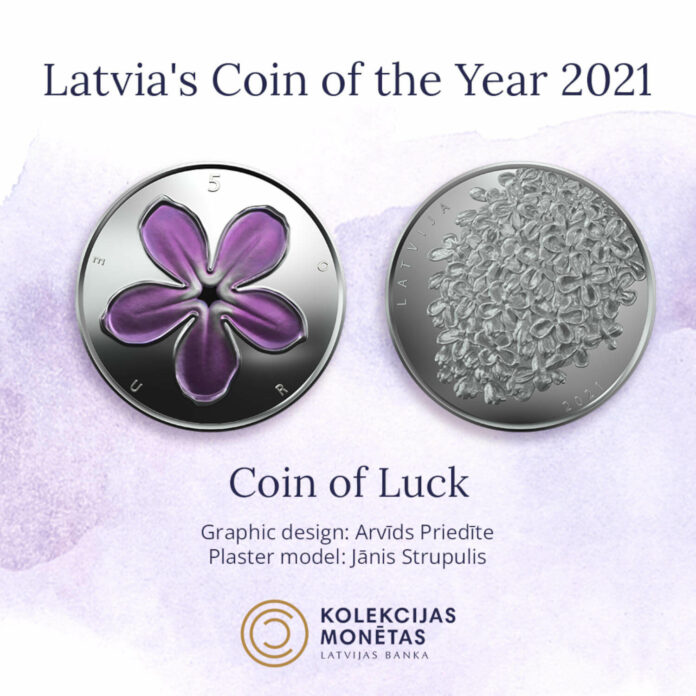 In the traditional public survey, the “Coin of Luck” won the title of Latvia’s Coin of the Year 2021. In the public survey, organised by Latvijas Banka and the news portal Delfi.lv, a record number of voters took part – more than 35,000.

The graphic design of the “Coin of Luck” has been created by Arvīds Priedīte, an experienced coin artist and the author of many collector coins issued by Latvijas Banka, whereas the author of the plaster model is Jānis Strupulis.

The message of the coin is that luck may very well be accidental. Unlike fortune, however, it requires you to grab opportunities when they present themselves. Sometimes fortune is just a fluke and simply falls into one’s lap without any effort. Yet, luck is no fluke. A lilac flower with five petals is one of the symbols of luck. As the local tradition has it, when finding a five-petal flower, one should make a wish and eat the flower or dry it and keep it at hand.

The obverse of the coin features a five-petal lilac flower in colour print, whereas the reverse depicts a lilac panicle, with one lucky five-petal flower to be found within the entire cluster of tiny flowers.

“This year the annual coin survey took place in a turbulent time, which probably makes us look at luck with completely different eyes. Let the ‘Coin of Luck’ serve us as a reminder and encouragement to share our success with those who currently need it much more,” stresses Zita Zariņa, Member of the Council of Latvijas Banka. “I would like to congratulate the artists of the coin on the marvellous artistic accomplishment that brings Latvia’s name far out into the world.”

The expert commission of the Latvian National Museum of Art (LNMA), composed of Māra Lāce, LNMA Director, Inese Baranovska, Head of the Decorative Art and Design Department, and Elita Ansone, Head of the Collections and Scientific Research Department, made its choice this year as well. The LNMA recognises the design of the coin “YES or YES” created by artists Krista and Reinis Dzudzilo as the most outstanding one in terms of artistic presentation – a convincingly concise and conceptual solution of the theme that joyfully attests the sacramental integrity of two persons’ union, when the obverse and reverse form a coherent whole.

Five winners will each be awarded the collector coin “Miracle Coin”.

Four collector coins dedicated to the Latvian culture and universal human values were issued in 2021:

Since 1993, Latvijas Banka has issued 98 lats collector coins and 44 euro collector coins, with over 50 Latvian artists having participated in designing them.

The Coin Design Commission of Latvijas Banka (the former Commission for the Thematic Concept of the Banknotes and Coins), which has been active since 12 November 1993, plays an important role in the coin issuing process. The Commission consists of the employees of Latvijas Banka, outstanding Latvian experts of art and culture as well as artists and scientists.

Have a go at the online quiz “Recognise the Cultural Symbols on Latvian Coins”.

You can find all 98 collector coins on the Latvijas Banka’s website.

You can find the coins in the Cosmos of Collectibles database.

What Is Your Favourite For Latvia’s Coin of the Year?

March, 3. 2022
Latvijas Banka opened voting for the Best Collector Coin of the Year 2021. View the four 2021 collector coins and vote for your favorite!
error: