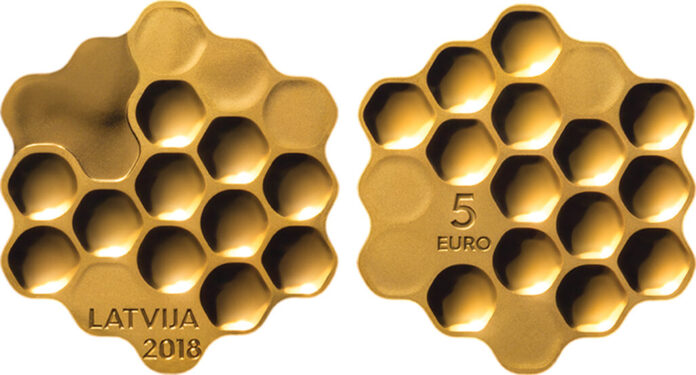 The day was sweet as honey for the Bank of Latvia when its 5-euro Honey Coin was given top honors as 2020 Coin of the Year during an awards ceremony held February 1, 2020 in conjunction with the World Money Fair in Berlin, Germany.

The Coin of the Year awards program, now in its 37th year, is an internationally conducted competition presented by World Coin News to recognize outstanding coin design and innovation worldwide. The 2020 program, sponsored by The Journal of East Asian Numismatics and the World Money Fair, honored coins dated 2018 in 10 categories of competition as decided by an international panel of judges.

The Honey Coin is styled as a honeycomb in gold-plated silver by artist Artūrs Analts. The Bank of Latvia calls it “a symbol of diligence and sweetness of work.” It was voted number-one from a pool of 10 category-winning coins, where it had come out on top in the Most Artistic Coin category.

“The impact of bees on both our ecologies and economies is fast being recognized as mammoth, so this simple and elegant design presents a lovely counterpoint to focus human response,” said Tom Michael, Coin of the Year coordinator and awards ceremony presenter.

Michael also coordinates the COTY nominating committee, whose job is to select 100 nominees from the more than 1,000 coins submitted for consideration by mints across the globe. He recalls the Latvian coin holding its own during the process.

“Of the many honey-themed coins we considered for nomination, this one really stood out,” he said. “Nominated by both the issuer and committee member Donald Scarinci, the Bank of Latvia Honey Coin garnered strong support from the judges and won by a very wide margin.”

Jānis Blūms, head of cash department and board member for the Central Bank of Latvia, was in attendance to accept the award.

100th Anniversary of the Founding of the Austrian Republic

70th Anniversary of the Italian Constitution 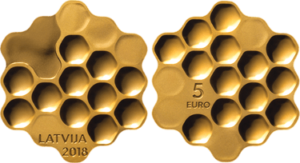 100th Anniversary of the Restoration of Lithuania Independence

The Earth and Beyond: Earth

100th Anniversary of the End of World War I

Have a look here for more details on the voting process and information for all 100 of the 2020 nominees.

These Are the COTY Winners 2023