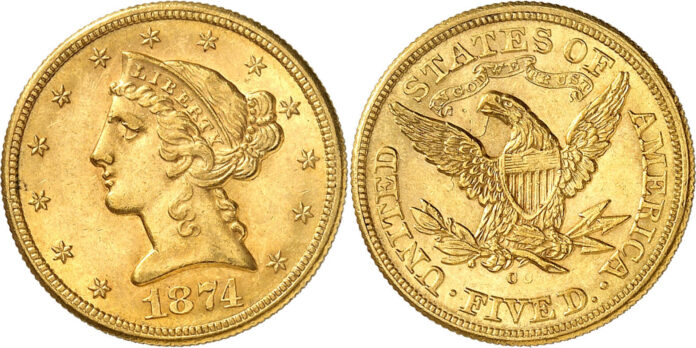 In part 1 you can read why some countries used the gold standard, others the silver standard and still others bimetallism. Today we will focus on the development starting in 1854.

Germany Opts For the Gold Standard

In 1854, Portugal, a key trading partner of England, adopted the gold standard without any major consequences. When the newly founded German Empire opted for the gold standard, the results were very different. After all, after its victory over Napoleon III, Germany had become one of, if not the most important economic power in Europe. And Germany took other nations with it: the Netherlands and the Scandinavian nations adopted the gold standard shortly afterwards.

This wasn’t a particularly big step for these nations; it was hardly noticeable for their citizens. This is because – and this point cannot be stressed enough – the gold standard did not mean that there weren’t any silver coins in circulation. It simply meant that all means of payment, i.e. small coins, bank deposits and banknotes, could be converted into gold at any time.

By the way, it’s a myth that the French coins paid as war reparations in 1871 were reminted into 20-mark pieces. Of the 5 billion marks paid, 4.248 billion came in bills of exchange denominated in English pounds. Germany exchanged these papers in London for the gold it needed to produce its currency. The silver coins, which were withdrawn from circulation and whose raw material was thrown back onto the market, caused the price of silver to fall even further.

Silver Producers in the USA

When the United States of America created the dollar, they were largely dependent on French loans. For example, it was thanks to these loans that the central bank ‘Bank of North America’ was founded. So, it’s no wonder that the United States of America modelled their monetary system after the French example and built it on both metals, gold and silver, despite the rich gold reserves in California.

And then in 1859, as mentioned earlier, the Comstock Lode was discovered. This discovery had an impact on the price of silver. During a crisis that would go down in history as the ‘Long Depression’, the government established a series of measures, including the adoption of the gold standard in the Coinage Act of 1873.

It was only three years later that there was any serious resistance. The Coinage Act became the ‘Crime of ‘73’. The silver producers developed a superb public relations strategy that concealed their own interests to such an extent that, to this day, you will read occasionally in books about American history that it wasn’t their own overproduction that caused the price of silver to fall, but rather the sale of silver in Germany following the currency changeover.

In fact, in 1878, the Bland-Allison Act was passed, over the veto of President Hayes, which forced the treasury to purchase a certain amount of silver every year and use it to mint silver coins. As this silver was bought at the market price, this development was less about returning to a bimetallic system and more about support buying in favour of the country’s own silver producers.

In the same year, the United States of America organised an international monetary conference, where they, as one of the biggest producers of silver in the world, attempted to convince other countries to switch to a bimetallic monetary system so that they could sell their own silver around the globe. The conference failed. Germany didn’t even send a representative, while the British delegates were ordered to block all proposals.

The ever-growing gap between supply and demand remained a problem. In 1890, the American Congress passed the Sherman Silver Purchase Act, which replaced the Bland Allison Act and meant that the federal government became the second-biggest buyer of silver in the world. By the way, the biggest buyer was the British government in India, which was attempting to hold up the rapidly falling price of silver and therefore support the Indian rupee.

In this one year, 1890, the price fell from 1.16 dollars per ounce to 0.69 dollars. On 1 November 1895, the treasury temporarily stopped issuing silver dollars.

And it wasn’t alone: over the course of the 1890s, Russia, Japan and the Habsburg Monarchy also switched over from their bimetallic systems to the gold standard. France and with it the countries of the Latin Monetary Union – with the exception of Italy – had already done this in 1878.

The Sherman Silver Purchase Act of 1890 had been passed primarily because it caused inflation and therefore enabled small farmers to pay off their debts with cheap silver dollars. And that brings us to a third possible explanatory model of why the gold standard triumphed in the 19th century.

This monetisation went hand in hand with the transition of the economy from self-sufficiency to a society based on the division of labour. Those who worked in the city depended on their savings retaining value and preferred stable gold, while the farmers, with their ever-increasing mortgages, relied on inflation to help them pay off their loans.

The almost worldwide transition to the gold standard is a sign that the most important segments of a country’s population were no longer based in its rural areas, but in its cities.

Gold as a Safe Haven

Even today, despite all the fluctuations in the price of gold, this precious metal is still considered a safe haven. Governments still encourage the flow of gold into their own country. For example, to this day, the purchase of gold bullion products is exempt from VAT in many countries, while all other bullion products made from precious metals, such as silver, platinum and rhodium, must be taxed.

At no point did the gold standard mean that all coins of a certain country had to be made from gold. It merely comprises:

And this is what caused the gold standard to fail in the long term. No country in the world had the discipline to issue only as much paper money as its gold reserves allowed, even in political emergencies. And in Europe, this meant that the system collapsed at the beginning of the First World War. The high demand for physical gold among citizens could no longer be met by the countries’ gold reserves.

Although many countries returned to the gold standard after the end of First World War, this collective realisation that only physical gold can be relied upon to retain its worth means that gold coins are still the first choice when it comes to safely storing assets during a crisis.

The Künker Auction entitled ‘A Numismatic Gold Treasure’ will be a brilliant opportunity to combine collecting with investing in gold.

Here you can read Part 1.

Here you can find the online auction catalogue, where the coins will be offered.

You can read the comprehensive preview of the Künker fall auction here.

January, 27. 2022
The German Constitutional National Assembly at St Paul’s Church in Frankfurt was one of the greatest achievements of the German revolutions of 1848. On 28 March 1849, the assembly elected Frederick William IV as Emperor of a unified Germany. Too bad that he did not want to be German Emperor in the first place!
error: