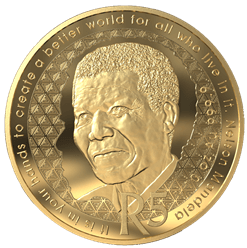 The ‘Life of a Legend – Nelson Mandela’ theme was first introduced in 2013 representing a different chapter of Nelson Mandela’s life on each year’s coin issue. It has over the years chronicled Madiba’s childhood, education, arrival in Johannesburg, his fight for justice, struggle against apartheid’s stranglehold and ultimately his 27 year incarceration and eventual release from Robben Island.

Mandela brought his pragmatism and generosity in life to leadership, paving way for a peaceful trasnsition for all South Africans from apartheid’s bitter past to a sprightly and robust democracy.

Life of a legend

Reflecting on this final edition, Tumi Tsehlo, South African Mint’s Managing Director says, “Mandela’s legacy, the extraordinary lessons he holds for the ages, and the reason why he stands head and shoulders above every leader of his generation, is that he showed the world that the entire edifice of apartheid could be dismantled with gratuitous generosity of heart.”

“It is befitting for a man of his stature that his legacy is preserved for posterity just like the gift of democracy. As we mark 25 years of our youthful existence, the South Africa Mint is proud to present these last coins in ‘Life of a Legend’ range.”

The R25 (1oz) gold coin represents the year 1994, when Nelson Mandela was elected as the first black President of a free and democratic South Africa. The heart of the coin design features a silhouetted profile of Nelson Mandela surrounded by a decorative pattern.

Within the silhouette, a portrait of Nelson Mandela is depicted with the Union Buildings featured in the background. The quotation, “Ours is a vision of a just and democratic South Africa in which all its people will enjoy a full and rewarding life” appears along the outer edge of the coin.

The design of the R5 (1/10oz) gold coin features an elderly Madiba and the quotation, “It is in your hands to create a better world for all who live in it – Nelson Mandela”.

The denomination, mass and metal value of the coin complete the reverse design of the gold coins.

Both the R1 sterling-silver proof and R1 sterling-silver uncirculated coin depict a smiling Madiba holding his grandchild. A paisley pattern, reminiscent of the shirts he loved to wear, was chosen for this design. The quotation, “The spirit of Ubuntu – that profound African sense that we are human only through the humanity of other human beings” is featured on the reverse, together with the denomination, mass and metal value of the coin.

The common obverse of both the gold and silver coins depict Nelson Mandela surrounded by a wreath of king proteas, the year ‘2019’ and the words ‘South Africa’.

The coins are available individually, and in a set of three comprising of the 1oz and 1/10oz gold coins and the sterling-silver proof coin. You can also purchase the special edition launch set which comes in custom packaging and comprises privy mark 1oz and privy mark 1/10oz gold coins, as well as a sterling silver proof coin, with a specially designed sterling-silver medallion that shows on the obverse the date of birth and death date as well as the name of ‘Nelson Rolihlahla Mandela’, together with values and personality traits associated with him. The reverse features an image of Nelson Mandela with more values, standards and ideals.

While Mandela served only one term as the country’s President, he remained active, seeking peace and social justice in South Africa and around the world even after leaving office. The former statesman established a number of organisations, including the influential Nelson Mandela Foundation and The Elders, an independent group of public figures committed to addressing global challenges and easing human suffering.

Towards the end of his presidency, Mandela became a vocal supporter of AIDS awareness and treatment fighting against the stigma and discrimination in a new struggle to protect the dignity of people living with HIV & AIDS.

Nelson Mandela passed away at the age of 95 on 5 December 2013 and yet even in death, his legacy and place in history remains imperishable.

“The ‘Life of a Legend’ theme is a political school on how to use charm, respect, kindness and pragmatism, all of which Mandela used with overwhelming political effect. Democracy was his dream, his legacy is our gift,” says Tsehlo in conclusion.

For more information, visit the website of the South African Mint.

October, 27. 2022
The South African Mint launched the new Rhino coin as part of the Big 5 Series II. The coin is available in gold and platinum and a range of different sizes.
error: