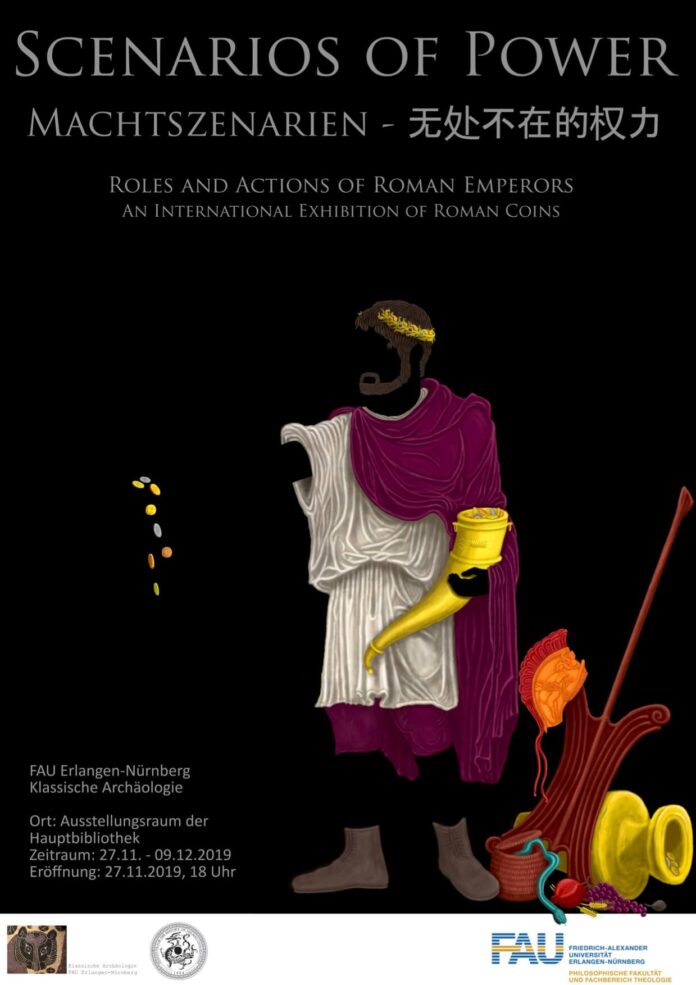 Pictures and texts on coins show in the first place their authenticity and minting authority: they protect against counterfeiting. At the same time, they are much more than that. Coins circulated in the whole Roman Empire and reached a wide audience as an ancient “mass medium”. While the emperor or his relatives are regularly shown on the front side, the pictures and texts on the back side are extremely diverse. They tell us about wars and peace, values and virtues of the Romans, gods and myths, celebrations and festivals, changing power relations and strong women. However, coins are not at all neutral witnesses of historical events. They tell their own stories in which they skillfully propagate imperial action – after all, the emperor, his family and high officials determined what texts and images were shown on the coins.

The coins of the Erlangen Antikensammlung, which are presented in this exhibition, both on posters and online in via QR-codes (with further information and videos) in three languages (English / German / Chinese), cover a period of approximately 300 years. In addition, coins from the collection of the Institute for the History of Ancient Civilizations (IHAC) in Changchun, China are displayed, with which the exhibition has been designed during a joint seminar in the summer semester 2019.

The exhibition was designed by:

The exhibition is publicly displayed from 27 November 2019 to 9 December 2019 at the exhibition hall of the Universitätsbibliothek, the Universität Erlangen, and from 16 to 31 January 2020 at the Institute for the History of Ancient Civilizations (IHAC), Northeast Normal University, Changchun, China. Permanently, it is accessible online.

Here you will find more information about the origination process and the methodological as well as didactic framework of the exhibition.

How would a Roman senator chat nowadays with his wife on the smartphone during a dull senate session? Watch the video in this creative story about a coin type minted by Emperor Titus for his consecrated deceased father and predecessor Vespasian.

The Institute in Changchun is very active (particularly with regard to cooperations with Germany) as you may learn from our articles on a numismatic summer school, or an online exhibition.

In our Who’s who we presented the vice-director Sven Günther.

November, 26. 2020
In 1972 Konrad Kraft published a work stating that some of the imperial coins of Asia Minor had been produced by moving mints. George Watson questions this hypothesis by examining the coins of Pamphylia, Pisidia and Cilicia from the years between 218 and 276.
error: