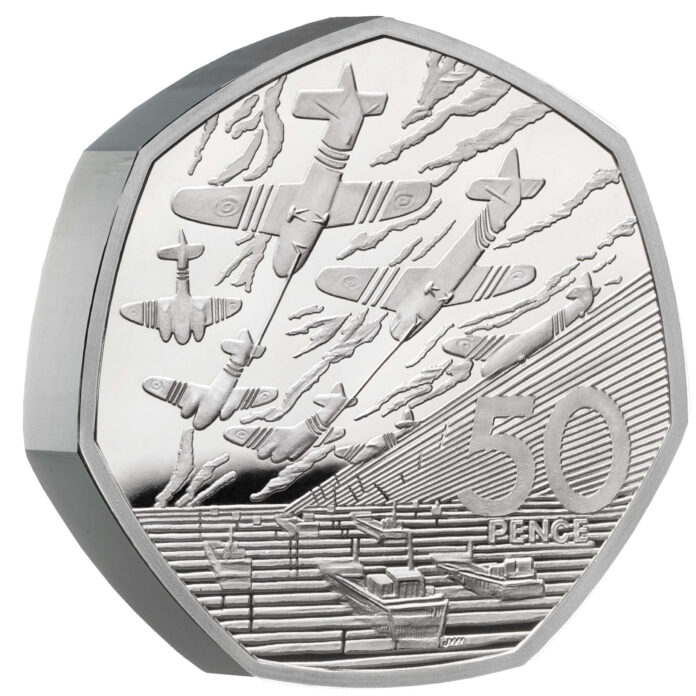 Earlier this year, The Royal Mint launched the 50p British Culture and Military Sets as part of the 50th anniversary celebrations of this revolutionary seven-sided coin, which was first introduced on 14th October 1969. Following the limited edition Gold, Silver and Base proof sets, the Royal Mint has unveiled a Piedfort version of the sets celebrating key cultural and military milestones on the 50th anniversary of the 50p.

The coins featured in both sets are some of the favourites amongst coin collectors, and includes one of the UK’s most sought after coins in circulation – the Kew Gardens 50p. The full British Culture set also includes the 50p commemorating Roger Bannister’s world record sub-four-minute mile, 100 years of the Scouts, and 100 years of the Girl Guides, alongside the iconic ‘New Pence’ 50p. Whereas the Military Set includes 50p coins marking the 75th anniversary of the Battle of Britain, 50 years since the D-Day Landings, the 950th anniversary of the Battle of Hastings and 150 years since the Victoria Cross was introduced.

The coins featured in both sets have been carefully selected to celebrate key cultural and military milestones they celebrate:

On 6 May 1954, Roger Bannister made sporting history, becoming the first athlete to run a mile in under four minutes. Taking the tape in three minutes and 59.4 seconds, in front of 3,000 cheering spectators at the Iffley Road track in Oxford, his legacy lives on as British athletes continue to break new ground, pushing themselves to the limit of human endurance. The design marked the 50th anniversary of this achievement by showing Roger mid-stride, as he closes in on his record.

100 Years of Scouting for Boys

The scouting movement was founded in 1907 by Robert Baden-Powell, a British cavalry officer. He hoped to instil in boys aged 11–14 a sense of resourcefulness and a code of chivalrous behaviour. Originally a British movement, scouting took off all over the world. Today, those values are still upheld as millions of boys promise to be loyal to their country, help others and obey the scout law. The design features the World Scout Emblem alongside the iconic motto ‘be prepared’.

100 Years of the Girl Guides

Inspired by the popularity of his scouting movement, in 1910 Baden-Powell asked his sister Agnes to start a similar group for girls. Still going strong in the twenty-first century, through a mixture of fun, adventure and friendship, the Girl Guides encourage today’s youngsters to face the challenges of growing up and to be the best they can be. The design features a special arrangement of the Girl Guides trefoil.

The 250th Anniversary of the Founding of Kew Gardens

2019 is the tenth anniversary of the release of the Kew Gardens 50p. A £5 million facelift of the Great Pagoda has recently restored Britain’s first skyscraper to its former splendour – even the dragons have returned for the first time in 200 years. Originally completed in 1762 as a gift for Princess Augusta, Kew’s landmark building will stand for centuries to come. The famous design features the Great Pagoda in all its glory, encircled by rare vines.

Restored to the coinage of Charles II in 1672, Britannia has been a fixture on the coins of every subsequent monarch. Christopher Ironside depiction of our most recognisable national icon – seated beside a lion, resting her shield – endured for 40 years before being replaced by Matthew Dent’s definitive design in 2008.

The 75th Anniversary of the Battle of Britain

For three months during 1940, RAF planes duelled with Goering’s Luftwaffe in the skies above Britain. Aided by the world’s best radar network, unrivalled Spitfire fighter planes, and squadrons supplemented by Eastern European airmen, Britain held out. Without aerial supremacy, Hitler was unable to launch Operation Sea Lion – his planned seaborne invasion. Handing Germany its first defeat would prove crucial in determining the outcome of the Second World War.

The 50th Anniversary of the D-Day Landings

To mark the 50th anniversary since the D-Day Landings, The Royal Mint released this design commemorating the largest amphibious assault in military history. Storming five Normandy beaches, Britain was able to gain a foothold on mainland Europe, a second front that would take the war to Germany. From the men who conceived it, to the unflinching bravery of those who took part, the legacy of D-Day lives on in the freedoms we enjoy today.

The 150th Anniversary of the Victoria Cross

Introduced in 1856 thanks to the support of Queen Victoria’s husband Prince Albert, the Victoria Cross is the highest award for gallantry that British servicemen and servicewomen can receive. The design of this coin depicts the medal that is still awarded to this day in recognition of acts of extraordinary bravery.

The 150th Anniversary of the Victoria Cross (Heroic Acts)

Before the Crimean War only senior officers could be awarded medals for bravery. With war correspondents working in the field for the first time, a movement to recognise the valour of the common soldier gathered momentum. Since its inception in 1856, more than 1,300 Victoria Crosses have been awarded for outstanding acts of heroism, testament to the extreme bravery of Armed Forces personnel who risk life and limb in defence of Britain’s interests.

The 950th Anniversary of the Battle of Hastings

This 50 pence piece was unveiled in 2016 to mark 950 years since one of the most infamous battles in British history. The death of Edward the Confessor plunged Britain into chaos as rival heirs came forward with their claim to the throne. Famously documented on the Bayeux Tapestry, Anglo-Saxon and Norman forces clashed at the Battle of Hastings, where an arrow to the eye sealed King Harold’s fate.

Nicola Howell, Director of the Consumer Division at The Royal Mint, commented: “The launch of both the 50p British Culture and Military sets earlier this year captured the attention of the nation and was a fantastic way to begin the 50 years of the 50p celebrations.

“On the 50th anniversary of the 50p, we are thrilled to announce the release of the Piedfort editions of the 50 years of the 50p British Culture and Military Sets. In response to widespread customer feedback we have introduced both these hugely popular sets to provide more people with the opportunity to celebrate this milestone anniversary.”

The 50 years of the 50p Gold and Silver Proof Piedfort British Culture and Military sets will be available to purchase from the Royal Mint’s website.

CoinsWeekly reported about the Royal Mint celebrating fifty years of the 50p coin.

In this video, you can watch Sir Roger Bannister run the world’s first sub-four minute mile: