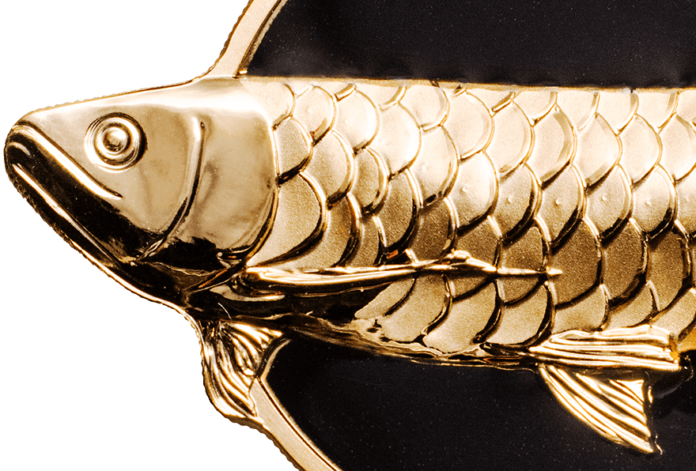 CIT Coin Invest links to an Asian tradition and publishes a new silver coin on behalf of the Republic of Palau with an image of the popular, and expensive, Asian Arowana “Dragonfish”.

The reverse shows an Asian Arowana in high relief, which seems to be swimming on a golden ring. This effect results from the remaining field being covered by black enamel.

Arowana, which due to their resemblance to a Chinese dragon are regarded as a particularly talismanic symbol in Asia, can very well keep up in price with the better known Koi carps. Their scales reflect the light in all colors of the rainbow. Depending on the color variant, up to six-figure sums may be paid for certain animals, particularly because it brings good luck to integrate them into the personal environment.

An aquarium positioned in the southeast corner of an apartment will bring money and wealth to the owner. In the north it furthers the career and in the east blesses the inhabitant of the apartment with robust health. An Arowana sculpture, coupled with the depiction of coins, furthers the trade if positioned at the entrance and / or the check-out counter.

The new coin of CIT Coin Invest links to this Asian tradition. It depicts, on an issue for the island nation of Palau, a naturalistically designed golden Arowana, which, thanks to smart minting technology seems to be hovering above the coin. The extravagant black enamel, through which the field optically completely fades into the background, has been applied with utmost precision.

The lucky scales of the fish have been treated state-of-the-art laser technology to create a exquisite sparkle. Each single scale is given a proof edge with a delicate frosting inside. Applying these two techniques side by side on a small surface alone is demanding. Considering that in addition each scale is not flat but three dimensional, the technical difficulties that have been mastered with this strike, become clearer.

Whether as mojo or symbol of state-of-the-art minting technology, the golden Arowana is a very special numismatic highlight indeed.

Learn more about the coin at CIT Coin Invest’s website.

To see the scales glittering in all their beauty, watch this video clip:

Read here why the Arowana is so popular and where to find it.

May, 20. 2021
Firefighters are among the real heroes saving lives every day. That is the reason why CIT has dedicated them an issue in its “Real Heroes” series.
error: