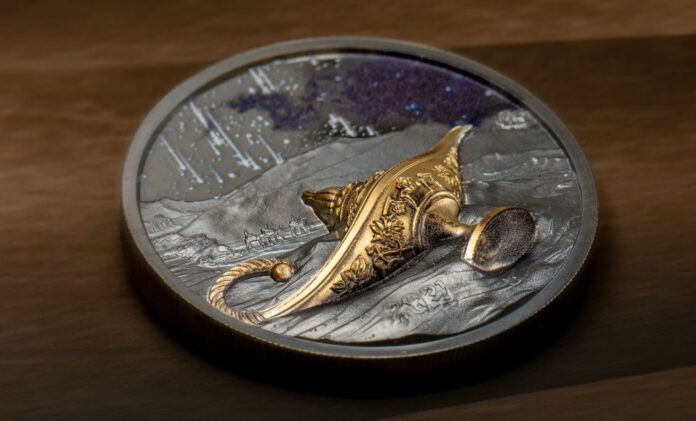 For all those who can still dream of the mysteries of distant worlds, CIT created the coin “Magical Lamp – 1001 Nights” on behalf of Palau. Thanks to an ultra high relief by state-of-the-art smartminting© technology, delicate color application and Black Proof, it reflects what every human being dreams of: to be the only one to spot the treasure hidden in the sand that will change our lives for the better provided we know how to make proper use of it.

Description of the 5 Dollar Coin

One side shows Aladdin’s Wonderful Lamp in the foreground, from the lamp blue smoke rises to the sky; it lies half-buried in the sand of a desert landscape; in the background a caravan and a starry sky with falling comets. At the bottom left 2021. The other side depicts the coat of arms of Palau with the inscription REPUBLIC OF PALAU 5 $.

Description of the 1 Dollar Coin

One side shows Aladdin’s Wonderful Lamp. The blank is shaped as an oil lamp. The other side depicts the coat of arms of Palau with the inscription REPUBLIC OF PALAU $ 1. The coins are produced by B. H. Mayer’s Kunstprägeanstalt, Munich.

Aladdin and His Wonderful Lamp

“There once lived a poor tailor, who had a son called Aladdin”, that’s the beginning of one of the world’s most famous fairy tales: Aladdin and the Wonderful Lamp. It’s about a poor boy who is used by an evil sorcerer to risk his life in order to retrieve a magical lamp from a treasure cave. However, by chance, Aladdin discovers the secret of the lamp himself: in the lamp, there is a powerful jinni with whose help the poor boy not only escapes form the cave, but also wins the hand of the beautiful daughter of a sultan and becomes the ruler of a kingdom.

The story of Aladdin and the Wonderful Lamp is from the tales of One Thousand and One Nights, a classic of world literature that has become the epitome of the fairy-tale Orient for many people. In fact, it’s a compilation of stories used by the beautiful Scheherazade to entertain her husband containing tales that come from many different cultures. The oldest ones date back to late antiquity, around AD 250. Since then, numerous people have eagerly listened to the wondrous tales of Scheherazade.

Here you can find further information about the 1 Dollar-gold-coin and the 5 Dollar-silver-coin.

In the online database of Cosmos of Collectibles you can find many more CIT coins!

If you want to fully understand the incredible relief of this coin, you have to watch this film.

Learn more about the medieval Arabian Nights and the modern forgery in this lecture of the University of Pennsylvania:

June, 23. 2022
CIT’s “Daydreamer – Future” uses smartminting® technology in a completely new way and creates an excellent and sophisticated illusion. Let’s draw the curtain to get a glimpse at the future!
error: