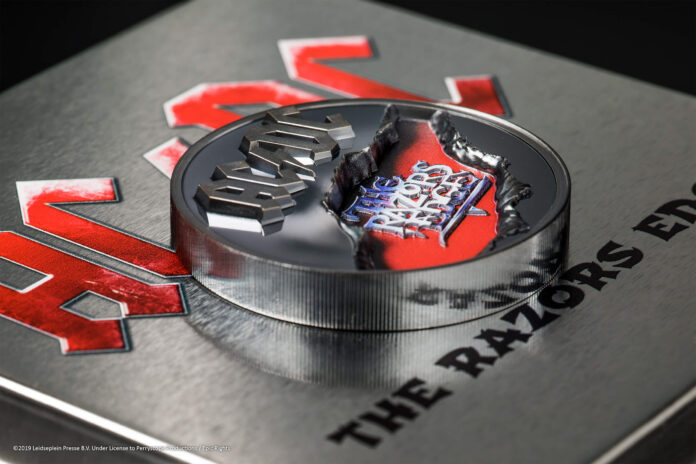 In 2018, CIT Coin Invest AG released the first issue of its successful AC/DC series, which is as popular among fans of this band as among lovers of innovative minting technology. “The Razors Edge” is already the fourth issue of this collection.

The obverse features the portrait of Queen Elizabeth II by Ian Rank-Broadley (initials: IRB); around, name of ruler, issuing nation and denomination 10 DOLLARS. Below, year of mintage 2019.

On the reverse you can see the colored cover of the AC/DC album “The Razors Edge”.

“The Razors Edge”, the eleventh international studio album of AC/DC from 1990, became a huge success. Still today, hits like “Moneytalks”, “Thunderstruck” and “Are you Ready” are musical common property. Many AC/DC fans associate special memories with this album. The reason is that it was followed by the hard rock band’s largest tour to that date, the “Razors Edge World Tour”, which took place in 1991/2 for more than one year. The Australian rockers amazed their audience in a total of 162 concerts in 22 countries. This tour was not only documented by a life album, but also by a movie.

“The Razors Edge” is a milestone of hard rock. Thus, from the technological point of view, CIT Coin Invest AG came up with something very special to comment on the message of the album’s title with their minting technology. The result is an ultra-high relief coin with two different surface levels. While the band logo in the upper field almost seems as if it was chiseled, the gaping cut of the razor blade is significantly lower and forms a second surface level, on which – once again – the name of the album seems to be chiseled. This is combined with an intensive color application. Thanks to black proof technology, the entire coin presents itself in a threatening black color, and therefore the red cut seems to be a dangerous gaping wound.

Learn more about the AC/DC coins on the web site of CIT Coin Investment AG.

We previously covered an earlier issue of the AC/DC series.

You can listen to the eponymous song here.

Movie Stars Instead of Generals – How the “Seventh Art” Established...

October, 29. 2020
Films have been around for about 120 years establishing the much-admired film stars, who are among the most famous personalities of all times. Nevertheless it took a long time until actors appeared on coins and medals. Why? What changed? Let’s go on a little journey through time.
error: