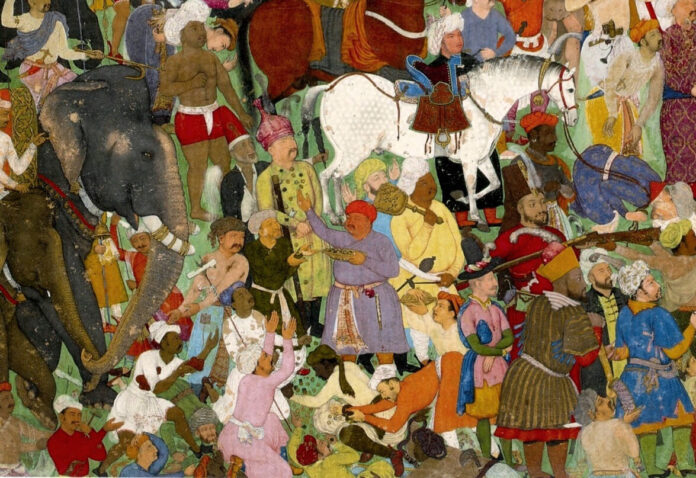 Those who look at the stars nowadays and think about the possibility of exploring other galaxies often forget about the fact that astrology was the mother of modern astronomy. The renowned astronomer Johannes Kepler earned his living by calculating the horoscope for the rich and famous of his time – just think about Emperor Rudolf II and Albrecht von Wallenstein. The resourceful man would have certainly also gotten a well-paid position at the court of Jahangir, the Mughal emperor ruling almost at the same time – from 1605 to 1627. In India, astrology / astronomy was one of the most important sciences, too.

A Ruler’s Life Determined by the Stars

For example, there are miniatures depicting the birth of a prince. While women assist the birth-giving woman in a separate chamber, the ruler waits in front of it and is entertained by musicians. There are astrologers with an hourglass in the chamber in order to record exactly at what time the child was born. This is necessary for calculating the exact horoscope.

And a horoscope was calculated for every prince and for every other citizen of the Mughal Empire who could afford it. Jahangir’s father, Akbar, to name just one example, was so proud of the auspicious minute of his birth that he had his chronicler Abu l’Fazl record it conscientiously for posterity.

Of course, such a horoscope was calculated for Jahangir as well. However, we can only get an actual idea about how omnipresent astrology was in the everyday life of the Mughals if we take a look at the coinage of Jahangir.

A Royal Collection: A Unique Ensemble at Numismatica Genevensis

In the context of Numismatica Genevensis’ auction 11 “A Royal Collection”, on 18 November 2019 an impressive amount of Mughal coins will be sold. Among them are both coins with the portrait of Jahangir and the largest ensemble of extremely rare gold mohurs featuring zodiac signs that has ever been on offer. They illustrate the major importance Jahangir assigned to his gold coins and to astrology.

The Beginning of the 13th Year of Jahangir’s Reign

Akbar died on 27 October 1605. His son Jahangir unofficially took over the rule on 3 November of the same year. Nevertheless, he waited until his astrologers predicted an auspicious day for it to officially ascend the throne. It was the evening of the 10 March 1606, and therefore Jahangir counted his years of reign from 11 Zíl ka’da / 2 Farwardín / 10 March.

Astrologically, Jahangir’s reign began in the moment when the sun moved from the sign of Pisces to the sign of Aries. This is indeed a wonderful moment, which is still celebrated today in many countries of the world as Nowruz (= new day).

Jahangir celebrated this jubilee every year and, of course, the festivities were especially splendid on the occasion of completing 12 years of reign. After all, twelve is a sacred number in Islam and Hinduism – unlike the number of ten, which only received high honours in the course of the French Revolution. Additionally, Jahangir just had achieved a decisive victory over Bijapur and Gujarat.

As every year, there were lots of ceremonies on the occasion of the reign’s jubilee. The Mughal emperor distributed new titles and positions among his court officials and military servants. He was weighed so that his weight could be distributed in gold and silver among his subjects. A part of the gifts consisted of magnificent gold coins, which were not meant to be used in order to cover the expenses of everyday life. They were awarded as honorary gifts, just like it was the case with a gnadenpfennig in the western world. The person receiving the gift was expected to have one of the pieces mounted in a sophisticated manner in order to wear it either as a turban pendant or on a long necklace as a symbol of loyalty to Jahangir. Figure 1 illustrates how these coins were worn by courtiers.

On the occasion of this jubilee, the celebrations must have been particularly sumptuous. Jahangir himself states in his report “Wakiatijahangir” that there was a fabulous party with a lot of wine. And – he says – because the servants standing especially close to the throne were given a particularly large amount of wine, they became quite merry.

A Series for the 13th Year of Jahangir’s Reign

Did Jahangir decide to mint coins featuring zodiac signs on this day? In any case, the first edition of the series of coins with zodiac signs depicts the sign of the first month of his year of reign, the Aries. In his report “Wakiatijahangir” he tells us: “Formerly it was customary to strike my name on one side of the coin and that of the place, and the month, and the year of the reign on the obverse. It now occurred to my mind that, instead of the name of the month, the figure of the sign of the Zodiac corresponding to the particular month should be stamped. For instance, in the month of Farwardín the figure of a Ram, in Urdíbihisht that of a Bull, and so on; that is, in every month in which a coin might be struck, the figure of the constellation in which the Sun might be at the time should be impressed on one side of it. This was my own innovation. It had never been done before.” The original manuscript is even said to have contained depictions of all twelve issues.

The mintage of the series was ordered on 23 Farwardín 1616. It continued for many years. All twelve zodiac signs are known of in gold, five of them in silver.

Today, these pieces are extremely rare because the depictions – just like those of Jahangir’s other coins – were extremely controversial. The fact that astrologers tried to understand the kismet, which had been set out by Allah, was considered a sin by some pious Muslims. The depiction of zodiac signs on coins almost seemed to be sacrilegious. They were also irritated by Jahangir having his own portrait depicted on coins – sometimes even holding a glass of wine in his hand! Jahangir was to remain the only Mughal emperor who dared to do that.

Already his son Shah Jahan was of a different opinion, even though he was also concerned about the balance between Muslims and Hindus. He ordered that Jahangir’s controversial coins be melted down. Even the possession and the usage of these coins is said to have been punished by death. Of course, this act also might be connected to the fact that Shah Jahan rebelled against his father during the last years of Jahangir’s life. Those who still wore Jahangir’s coins on their turbans did this to express that they did not support the new Mughal emperor.

Everybody who has seen the huge astronomical observatory built by Jai Singh II between 1727 and 1733 at Jaipur knows that the rich Indian astrological tradition became a science in the 18th century. It houses fourteen buildings that serve the purpose of collecting astronomical data. At the time it was built, it was only one of five observatories in the empire of the Maharaja of Amber. Today, it is a UNESCO World Heritage Site visited by tourists from all over the world.

An Indian space probe reached Mars in 2014 and currently they are working on manned space flights – India’s tradition of space exploration dates back to early modern times, when people both in Europe and in India still believed that stars determined the fate of human beings.

For more information on the auction or the auction house, please go to the Numismatica Genevensis website.

December, 19. 2019
In their November auctions Numismatica Genevensis SA offered pieces that had one thing in common: They were extremely beautiful, regardless of whether they had an estimate of CHF 2,000 or CHF 1.5 million. Collectors and investors appreciated the outstanding quality. The hammer prices were impressive. Here you can find some remarkable results.
error: