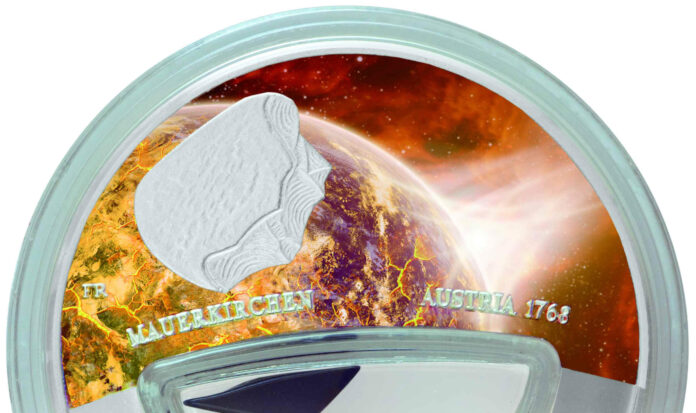 A ball of fire followed by a bright tail suddenly appears in the sky. If it’s small enough, we – the astrological laymen – call it a shooting star and close our eyes to make a wish. However, if it’s a comet or even a meteorite, most people get scared. And they have good reason to. As we learned in 2013 from the Chelyabinsk meteor, which was captured impressively by numerous Russian dashboard cameras, the impact of the meteor isn’t the only thing we should be afraid of. The shock waves caused by the meteor, which fractured when entering the Earth’s atmosphere, were so strong that several thousand buildings were damaged and about 1,500 people injured by shattered window glass and small stones.

However, meteorites have always fascinated mankind. In some cases they were interpreted as promising omens, on other occasions as signs for upcoming wars and disasters. For William “the Conqueror”, Halley’s Comet, which was spotted in the spring of 1066, was an indicator for the rightful death of his opponent Harold II.

For Augustus, the so-called Sidus Iulium was the manifestation of the apotheosis of Caesar. And people have been collecting meteorites for a long time. Parts of these celestial bodies were kept in the cabinets of curiosities of Renaissance princes and in the scientific collections of the Enlightenment.

Coin lovers know that it’s possible to buy space rocks for a little less money: in 2004, coins and meteorites were sold together for the first time. With the silver coin “The Meteorite NWA 267”, CIT Coin Invest AG did not only begin its “Meteorite Impacts” series, which is still running today, on behalf of Liberia but also opened the field of collection of meteorite coins.

They started quite simple: a plain silver coin without any colour with an inlay of several meteorite fragments. Since then, other mints also jumped on the bandwagon outdoing each other year after year in terms of exciting designs, extraordinary meteorites and spectacular minting technologies. And those in charge of the PR departments are constantly creating new puns with terms from the field of aviation and spaceflight.

In the context of the International Year of Astronomy, the Royal Australian Mint used fragments of a 22.8 kilogram meteorite from the so-called Campo de Cielo for its version of meteorite coins, which were already extremely popular at the time. This “field of sky” is known to experts because a whole meteorite shower crashed down there about 4,000 years ago. 26 craters can still be seen there today. And mints repeatedly used items from this field for their galactic creations. The innovation of this Australian coin was that the fragments weren’t used as inlays on one side of the coin – instead, they were encapsulated and placed at the coin’s centre.

In the following years, designers experimented with colours, used rock fragments of an increasing size and their creations became more dynamic. The meteorites came from everywhere. They had crashed into Poland (Pultusk), Libya (HaH 280), Scandinavia (Muonionalusta) and Canada (Abee). Even rock fragments from the moon and from Mars found their way onto coins.

Parts of the Mauerkirchen meteorite, the largest stone meteorite that fell on former Bavarian territory, were exhibited at the 50th Munich Show – “Mineralientage”. This stone became the foundation of the work of physicist Ernst Florens Friedrich Chladni and heralded the beginning of modern meteoritics. In 2013, a numismatic monument for eternity was created for this very meteorite as part of the “Cosmic Fireballs” series issued by Fiji. Unfortunately, those weren’t real meteorite fragments but tektites, i.e. glass objects formed of terrestrial debris created by a large meteorite impacting Earth.

In 2016, CIT Coin Invest AG pulled another ace from the sleeve. The Tamdakht Meteorite Strike coin was a little sensation. The piece was intentionally overstruck, which lead to a breakthrough of the planchet imitating the impact and the crater of a meteorite. Each of these coins is unique because there was no way of predicting when and where the coin would break. A piece of the Tamdakht meteorite, which fell in the desert in Mali in 2007, was attached to this coin.

We are excited to see what other spectacular coins in this field of collection the future will bring. Mints will probably continue to push the boundaries of their coins’ planchets and the limits of what is possible in terms of minting technology. Many meteorites can be found all over the world, all of them bring us closer to what’s in space and tell spectacular stories. Just as coins are witnesses to their time. Hence, immortalizing meteorites on coins combines two interesting special fields, both of which are driven by enthusiastic collectors.

And for all those who want to know exactly what these different celestial objects are – asteroids, comets, meteoroids. All the same? Not at all. Asteroids are so-called minor planets. They are elliptically orbiting the sun and can almost never be seen with the naked eye. Since they are mainly composed of rock and non-volatile materials, they never have a tail. Comets, on the other hand, mainly consist of volatile substances such as dust and water. That’s why the well-known tail can be seen when a comet approaches the sun. Meteoroids are much smaller, they are often rock fragments of planets and comets. Most of them can be found in the Asteroid Belt between Mars and Jupiter. A meteoroid can be deviated from its course and drift through the solar system. As soon as it enters the Earth’s atmosphere, it’s called a meteor. Small meteors burn up in less than a second – they are shooting stars. If a meteor isn’t destroyed but falls on earth, we call it a meteorite.

You can look for meteorite issues in our new database Cosmos of Collectibles. The first coin on this subject has already been uploaded and new issues are being added constantly!

You can find more items in the CoinsWeekly archive.

In this film you can see what it looks like when a meteorite is about to impact Earth.

Are you currently in an apocalyptic mood or do you like scary images? This simulation of the Discovery Channel shows what would happen if a really, really large celestial object, an asteroid, would hit Earth.

October, 24. 2019
For the Cook Islands, CIT Coin Invest AG has designed a new silver coin as part of the Meteorite Impacts series. Just like its predecessors, the issue “Estacado Meteorite” contains a part of the meteorite it is named after.
error: