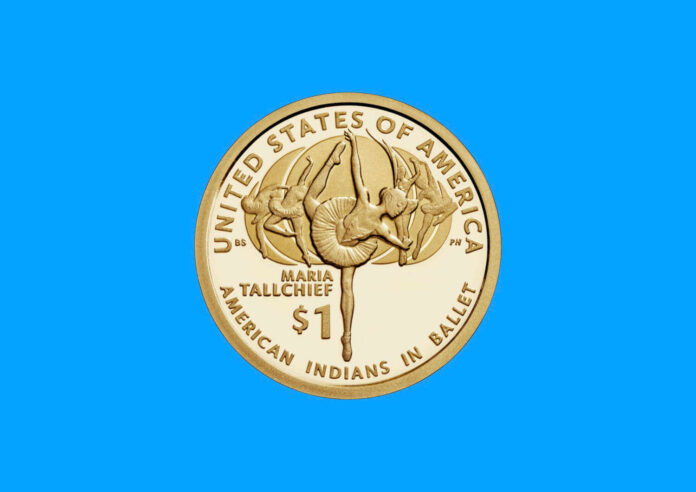 The United States Mint announced the reverse design for the 2023 Native American $1 Coin. The 2023 Native American $1 Coin honors American ballerina Maria Tallchief and American Indians in ballet. Considered to be America’s first prima ballerina, Maria Tallchief broke barriers as a Native American ballerina (Osage Nation) exhibiting strength and resilience both on and off the stage. In addition to Tallchief, four other American Indian ballerinas from Oklahoma achieved international recognition in the 20th century, including her younger sister Marjorie Tallchief, Yvonne Chouteau, Rosella Hightower, and Moscelyne Larkin. Celebrated as the “Five Moons,” their legacy of achievement and inclusion continues to influence ballet today.

Designed by Artistic Infusion Program Designer Ben Sowards and sculpted by United States Mint Medallic Artist Phebe Hemphill, the reverse (tails) design features Maria Tallchief in balletic pose. A nod to the “Five Moons” is presented in the lunar motif, while the four ballerinas in the background are symbolic of both Tallchief’s American Indian ballerina contemporaries and the generations of dancers they inspired. Inscriptions include “UNITED STATES OF AMERICA,” “MARIA TALLCHIEF,” “$1,” and “AMERICAN INDIANS IN BALLET.”

The obverse (heads) of the 2023 Native American $1 Coin will continue to feature the central figure “Sacagawea” carrying her infant son, Jean Baptiste, by sculptor Glenna Goodacre. Inscriptions are “LIBERTY” and “IN GOD WE TRUST.” The year, mint mark, and “E PLURIBUS UNUM” are incused on the edge of the coin.

Here you can find out more about the United States Mint.

These and more US coins are listed in the Cosmos of Collectibles database.

And if you don’t want to miss any more new issues, subscribe to the bi-weekly newsletter of Cosmos of Collectibles.

Dennis Tucker remembers Glenna Goodacre, who designed the obverse of this coin.

David W. Lange on the Enduring Appeal of the Lincoln Cent

July, 11. 2019
Whitman has published the third edition of Q. David Bower’s “Guide Book of Lincoln Cents”. David W. Lange explains his fascination with the Lincoln cent, and why this book is “a must-have for any numismatic library”.
error: