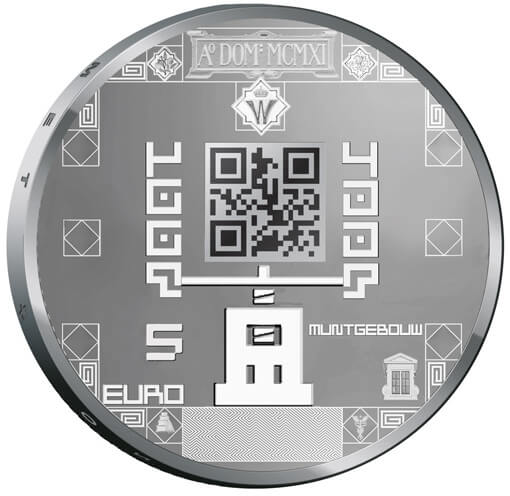 We don’t have to go back in time very far to find this week’s CoinsWeekly Coin Record. This time, the Royal Dutch Mint submitted a record claiming that they produced the first ever QR coded coins in 2011. The new pieces were issued in celebration of the 100th anniversary of the mint’s building in Utrecht in gold and silver at the time.

At the time it was issued, scanning the code led to a short but suspenseful video, followed by a redirection to the Royal Dutch Mint’s website and a memory game

QR Codes were first developed in Japan in 1994 by Denso Wave, a Toyota subsidiary, to simplify the tracking of car parts in the manufacturing process. They have since become popular in advertising, general logistics, ticketing, and sales labeling – and since 2011, on coins. They can be scanned by using specific apps or smartphone cameras.

The QR coin won both the 2013 “Most Innovative Coin of theYear” and the “Coin of the Year” award.

The innovative QR coded coin was also discussed in the 2013 Technical Forum at the World Money Fair.

More information on coins issued by the Royal Dutch Mint can be found online.

CoinsWeekly reported on the first QR coded coin back in 2011.

If you want to learn more about QR codes, this website will explain them in more detail.

June, 17. 2021
In 2021 the traditional ceremony for the Coin of the Year Awards was not held as usually. The pandemic made it necessary to shift from real to virtual life for the 2021 Awards Ceremony. You can watch the ceremony online now.
error: