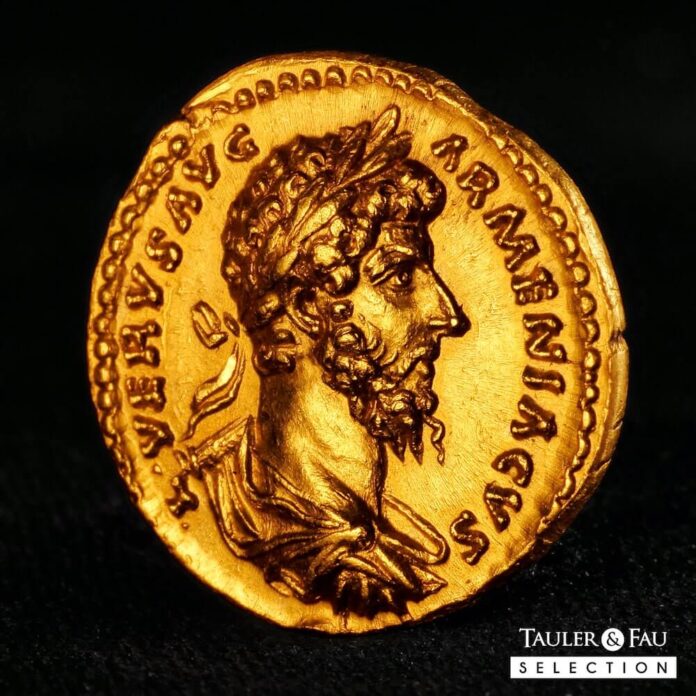 Tauler & Fau Selection auction 87 features 374 lots and closes on Wednesday, 9th June 2021, beginning at 04:00 PM (CEST), exclusively online. This sale features an important selection of numismatic rarities of ancient, Spanish and World coins. You will find, under the Greek coins, a rare and beautiful Antigonos III Doson tetradrachm and a fine style Mithradates II tetradrachm of Kingdom of Parthia.

On Roman Coins, you will find a really good selection, highlights are a Fleur de Coin aureus of Lucius Verus with high relief and original luster that is one of the best specimens known and a very rare anepigraph Antoninus Pius Aureus, almost Mint State with pleasant color and appearance. You will also find a really beautiful and rare aureus of Augustus that show us on reverse, Gaius and Lucius Caesars standing facing, two shields and two spears between them, above simpulum and lituus and CL CAESARES in exergue, with full legends. Finally, on roman period, the collectors will find a magnificent selection of republican, imperatorial and imperial denarius.

On Spanish Coins, an 8 reales of Potosi “HEART CUT” of 1706, 1 of 3 specimens known of this year type and 1 of 35 specimens of this “Heart Cut” type are known, an iconic coin of Spanish Colonial period, can be highlighted. Another remarkable coin is a 1 escudo of Segovia of Bernardo y Esteban de Pedrera assayers of 1652 over 22, a magnificent example with original luster and only one specimen known. The Spanish period is full of rarities, an excellent selection of Royal Coinage, 8 escudos, 8 reales, etc.

On World coins, the auction offers an extremely rare 4 escudos of Costa Rica with Radiant six-pointed star countermark, just over a 6 specimens known. Also collectors will find a Mint State 2 Ducats of 1700 of Nuremberg (Germany) and a very rare 5 Guineas of Charles II (Great Britain) of 1673 minted in London.

Some highlights from this auction:

This sale also includes plus 250 Special Pictures and 150 Videos of the most selected lots, that you can enjoy through the auction catalogue.

For further information about the auction, visit the Tauler & Fau website.