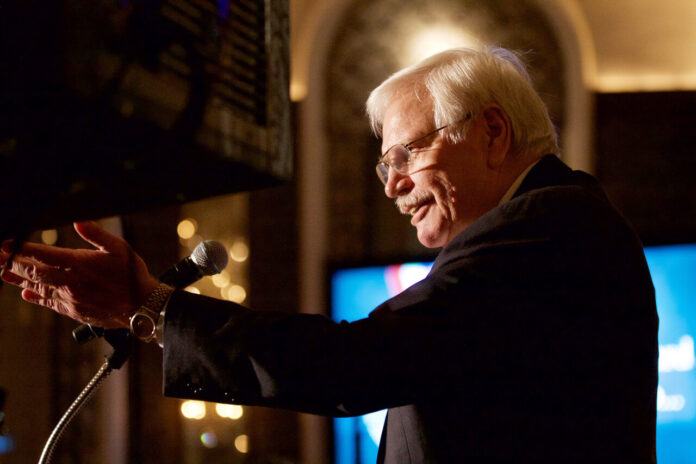 The American Numismatic Society announces with great sadness the death of its Trustee and former President, Sydney F. Martin. The family has provided the following obituary. The Society will publish a longer obituary and appreciation of his numismatic life and work in the upcoming ANS Magazine:

Sydney Furman Martin, of Amelia Island, FL, passed away peacefully on 19th January 2021, after a protracted battle with cancer. An entrepreneur, philanthropist, and world-renown collector, he was born in December 1945, at the Smoky Hill (Kansas) Air Force Base to Furman C. Martin Jr. and Naomi Louise (Stevens) Martin. He moved with his family throughout the United States until his father retired in 1959, when the family put roots down in Warsaw, IN. After graduating from Warsaw High School in 1963, he attended the Massachusetts Institute of Technology, where he earned in five years both SB and SM degrees. It was there that he began his long career in the defense industry.

After a stint with Auerbach Corporation, he joined Analytics, where he worked for nearly 20 years, gradually rising to become its Chief Operation Officer. Looking to challenge himself, in 1988, he and his wife, Sharon, founded Sytex, Inc., which, under his leadership grew into The Sytex Group, Inc., a company supporting Army, Air Force, Navy and National Intelligence clients, that employed more than 3,000. During that time, he was awarded the Order of St. Barbara (for work advancing Army artillery) and the Knowlton Medal (for exceptional work in advancing the Intelligence community).

President of the ANS and much more

Meticulous about business, he was also passionate about art, numismatics, and philanthropy. He lived for more than 30 years in Doylestown, PA, and became involved in a number of local and national boards. He became the President of the American Numismatic Society, and the Chair of the Michener Museum of Art, the Executive Vice President of the Doylestown Historical Society, and the Vice President of the Central Bucks Chamber of Commerce. He also served on the Board of the Heritage Conservancy, the Washington Crossing Council of the Boy Scouts of America (he was proud to earn his own Eagle Scout distinction), and the National Bibliographic Society. He was the editor of the award-winning Colonial Coin Collectors Society Newsletter, the author of numerous articles and five books that have become basic references dealing with specialty topics of Colonial and Pre-Federal numismatics. He earned election to the Rittenhouse Society, The Antonelli Society, and the prestigious Archer Huntington Award from ANS. In addition, the Colonial Coin Collectors Society created the Sydney F. Martin Numismatic Publication Award. Syd and Sharon are known for their vast and varied philanthropic efforts and contributions, most notably the creation of the Philadelphia Prostate Cancer Biome Project at Jefferson Hospital.

He is survived by his loving wife, Sharon (nee Athy), of 47 years, as well as his sister, Martha Moore of Springfield, MO; and brother, Timothy, of Denver, CO. His brother Wayne predeceased him. His children, of whom he was extremely proud, are: son Daniel S. Martin (Bria) of Mill Valley, CA, the founder and president of AMPED, Inc., daughter Jessica Thompson (Mark) of Lynchburg, VA, CEO of the Martin Foundation; son Dr. James F. Martin (Amy-Beth) of Rumson, NJ, emergency physician; and stepson Kevin M. Sylvester of Attica, OH, builder and musician. He was equally proud of his grandchildren: Landis, Turner, Graeme, Nyla, Asher, Wyatt, and Cody.

A private service will be held; a Celebration of Life will be held at a later date. In lieu of flowers, donations in memory of Sydney Martin may be directed to the Sidney Kimmel Cancer Center at Jefferson Health. Please donate online or make checks payable to Jefferson, note “Memorial-Sydney Martin” in the memo, and mail to: Jefferson Office of Institutional Advancement, 125 S. 9th St., Suite 600, Philadelphia, PA 19107.

For more information visit the website of the American Numismatic Society.

April, 9. 2020
On March 30, 2020, the author and professional numismatist Eldert Bontekoe died. In 1982, he began building his company that was to become worldwide known: Pegasi Numismatics. We re-publish his online obituary.
error: