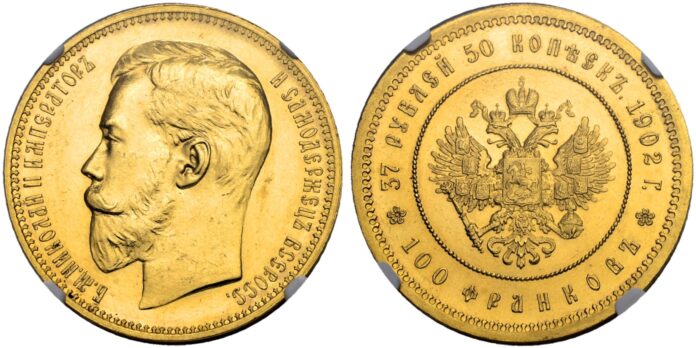 SINCONA AG will be holding their auctions 58 to 62 from 21 to 24 October 2019 in Zurich. The layout for the catalogues is done and the texts are printed. Lovers of numismatics will be pleased about the beautiful catalogues – hardcover editions, of course – which will later find a worthy place in the numismatic library.

This fall, SINCONA AG’s auction week starts once again with a catalogue of Russian coins and medals and all tsars are well represented. Auction 58 comprises 650 catalogue numbers, and about 100 of the lots are gold and platinum coins. As usual, the text is written in English and Russian. And, also as usual, next to great rarities and extraordinary fine pieces some fractions and rare copper coins can be found. The estimate is 2.1 million Swiss francs.

SINCONA’s so-called general catalogue, which contains world coins from Egypt to Cyprus, is catalogue Auction 59. It is divided into three parts: World coins and medals made of gold and silver, the popular SINCONA bullion auction (78 positions) and Swiss coins and medals.

The main focuses of this catalogue are gold coins, especially those from the 19th century, high-quality coins of the USA, a series of Czech medals, mainly from Prague, numerous modern piedforts and a large collection of coins of the Ottoman Empire. Also in this auction, a series of orders and decorations will be offered. Regarding Swiss coinage, you can find important series of coins from Bern, containing an impressive amount of 22 gold coins, from Zurich, with more than 100 lots, and, of course, from the Swiss Confederation including shooting medals. All in all, there are 2,400 lots with a total estimate of CHF 2.3 million.

Werner Pfister is really what you call a passionate collector. During the last decades he collected, among other things, Swiss Confederate coins – what mattered to him was not the completion of his collection but the individual coin itself. And this intention is reflected in the title of the auction sale: Swiss Confederate coins of magnificent quality. Over the years, he gathered pieces that simply do not exist in better quality on the market in terms of their condition and especially their patina. Therefore, one encounters in this catalogue even pure nickel coins with iridescent plays of colours. By the way, there are also two specimens from 1896 – it is extremely rare to find coins from that year. Many of the 448 pieces have been graded by the American grading companies. The total estimate is CHF 226,000.

It has long been known that Swiss shooting talers and medals are not only collected intensively in the country they stem from – no, they are also very popular in other countries such as Japan, China and the USA. Stephen Corn from Florida, who died in 2018, can be described as the actual pioneer of Swiss shooting medal collectors; his collection has grown over the many years and comprises now more than 700 lots with a total estimate of CHF 275,000.

This year’s catalogue of banknotes comprises 725 lots with interesting pieces from Afghanistan to Cyprus. The offer ranges from old individual pieces from the 18th century to large lots for dealers and to modern issues from this decade – you can find anything, and there is certainly an attractive piece for any specialist among the offered objects. The total estimate – as usual calculated with expertise and caution – amounts to CHF 230,440.

The section of German coins is a large chapter with more than 125 lots, ranging from banknotes of the German States to rare issues worth trillions of Swiss francs.

Also the modern banknotes from Italy are especially worth mentioning. Special collectors that have been searching for a long time for specimen banknotes (“campione”) and for the rare substitute notes will certainly find some rarities here that are usually hard to find – and, of course, in perfect quality.

Already one year ago, SINCONA offered a gorgeous series of banknotes from the Austrian Empire. In this year, there is a new collection of almost 80 spectacular lots on offer. The bidding battles will definitely be very exciting.

Obviously, there are a lot of Swiss banknotes on offer. As an example, we would like to mention a piece that probably cannot be exceeded in terms of quality, a 100 francs banknote 1918 with the depiction of William Tell in a medallion.

Other rarities from different countries that are worth mentioning are for example: Greenland’s issues from 1803 and 1804, 8 specimen banknotes from Iran from the time of the Pahlavi dynasty and 3 Dutch banknotes 1909 “old style” that are not listed in the Pick catalogues. Another example that will attract many collectors is a particularly rare Chinese banknote of 400 cash CD 1909 from the Sinkiang Provincial Bank.

On the SINCONA website all current auction catalogues are available online.

April, 28. 2022
3,700 lots with an estimate of 7.6 million francs are featured in the upcoming spring auction of SINCONA AG. The sales include the second part of the British Collection as well as the Köhlmoos collection.
error: