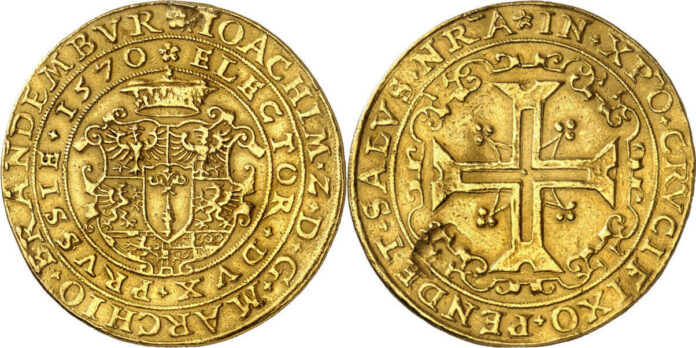 The field of Brandenburg-Prussian numismatics is virtually bursting with rarities that make the eyes of collectors sparkle with joy. And yet: even among all these treasures, Brandenburg portugalesers stand out. The Künker auction house is offering as much as two of these extremely rare multiple gold coins of 10 ducats in catalog 369 of its Summer Auction Sales. Let’s take a close look at the coins and at what they can tell us. We will start with a brief introduction about the origins of portugaleser issues.

How the Portugaleser Came from Portugal to Brandenburg

This story starts with a plain fact: in the late Middle Ages, there was hardly any gold left in Europe because there were simply no rich deposits on the continent. Portugal took advantage of the great demand for this precious metal since the seafaring nation had excellent trade connections to Africa, which was rich in gold. Around 1500, Lisbon became a key place of gold transshipment. Starting in 1499, the Portuguese minted large gold trading coins worth 10 cruzados, which pretty much equaled 10 ducats. These coins were called Portuguez and were soon accepted in various parts of the world. This also applied to northern Europe, where the coins were readily accepted in the wealthy merchant towns of northern Germany and the Netherlands. And it did not take long for the first imitation coins to be produced. In the Holy Roman Empire, these coins were called portugalesers, which simply means “Portuguese”.

Portugalesers established themselves and continued to bear this name even when the gold had long ceased to come from Portugal. At no point, however, was this coin type particularly common. After all, the value of such a coin equaled what a journeyman bricklayer from Hamburg earned in 108 days of work. Right from the outset, the coin had mainly been used for the long-distance trade or as a valuable gift.

Princes in northern Europe who thought highly of themselves and wanted to distribute representative gifts also minted portugalesers from time to time – including the house of Hohenzollern in Brandenburg. But only a few issues were minted there: only three different full-weight Brandenburg portugalesers of 10 ducats from the 16th century are known of. What’s even more impressive: Künker is able to offer as much as two of them in auction 369 as part of the sale of the collection of the Berlin savings bank. Let’s take a close look at these rarities for there is a lot to discover.

Elector Joachim II minted the first Brandenburg portugaleser in 1570. The piece clearly shows its Portuguese roots: the cross of the Portuguese Order of Christ, which already appeared on the first portugaleser of 1499, is unmistakably emblazoned on the reverse. After all, King Manuel of Portugal, who commissioned the first issue, was Grand Master of this order of knights. The cross was the distinguishing feature of this coin type, which was accepted by merchants in many parts of the world. The other side of the coin features the Brandenburg coat of arms.

The circumscription is arranged in two concentric circles. In it, we can find a historically interesting title: Joachim II is referred to as “Dux Prussie”, Duke of Prussia. Actually, a Franconian Hohenzollern line of the House of Brandenburg-Ansbach held this title. For in 1525, the last Grand Master of the Teutonic Order of that very dynasty had transformed the State of the Teutonic Order into a secular duchy that was ruled by him and his descendants. However, in 1596, Joachim II obtained a hereditary co-enfeoffment from the Polish king who was the supreme feudal lord of Prussia.

Although this didn’t make him ruling duke, it was to pay off in the long run. The enfeoffment was the first step towards the unification of Brandenburg and Prussia, which was completed by one of his descendants in 1618, and towards the foundation of the Kingdom of Prussia. This portugaleser is probably the issue that mentioned the Prussian title on a Brandenburg coin for the very first time. It is very likely that the co-enfeoffment was the occasion to issue the portugalesers.

Due to a rare coincidence, we know even more about the origin of this portugaleser: Joachim II is said to have given a heavy gold chain to his mint master to have it melted down and create the portugalesers. Legend has it that he gave one of the valuable pieces to each of his guests at Köpenick Palace the evening before his death. The trace of mounting tells us that the portugaleser used to be worn around the neck or attached to clothing, which was customary for such gifts.

Only two specimens have survived to this day. One of them is kept at the Berlin Coin Cabinet. Künker offers the only specimen that is available on the market.

The 1584 portugaleser of 10 ducats is unique and went down in auction history in March 1999: in a Künker sale, it set the record for the most expensive German coin ever sold up to that date.

It is the second known portugaleser issue of Brandenburg and was issued by Elector John George, the son of the afore-mentioned Joachim II. We can see John George on the obverse. The elaborately designed armor depicts the Elector’s patron saint – St. George – as a dragon-slayer on horseback. Fully aware of his power, the Elector’s hand rests on the hilt of his sword. In the other hand he holds a scepter. And it isn’t just any scepter – it’s the imperial scepter, the symbol of the Brandenburg Elector. Ever since a Brandenburg Elector first had himself depicted on a coin in 1521, this symbol has been an integral part of the coin image. As arch treasurer of the Empire, the Margrave of Brandenburg had the privilege of carrying the imperial scepter at the coronation of a new emperor.

An Unusual Version of the Coat of Arms

To make room for the portrait on the obverse, the engraver combined the Portuguese cross, which is so characteristic for portugalesers, with the Brandenburg coat of arms, an unusual version of which can be encountered on the reverse. The shield with the imperial scepter crowned by the electoral hat was placed on top of the Portuguese cross, which is why the imperial scepter is depicted twice on the portugaleser. The year in which the coin was minted – [15]87 – is indicated in the electoral hat, an unusual place for a date. A coat of arms is mounted on each of the four ends of the cross: the eagle for the Mark of Brandenburg at the top, the griffin for Pomerania on the right, the quartered shield of the house of Hohenzollern at the bottom and the lion, which we know from the coats of arms of the Hohenzollern territories in Franconia, such as Ansbach, on the left.

The Berlin savings bank will donate the proceeds from these two pieces, as well as the proceeds from the sale of the entire collection to social and cultural institutions in Berlin. Ulrich Künker comments: “We hope that the funds that will go to Berlin’s art and culture scene can help to somewhat mitigate the partly disastrous effects of the pandemic.”

The two Portugalöser as well as other exciting coins from the house collection of the Berliner Sparkasse can be found in Künker auction 369.

And as a connoisseur of the subject, you should not miss this film on Hamburg Portugalesers.

By the way, do you know the story behind the Portugalesers of Johann Adolf of Schleswig-Holstein-Gottorf?

June, 17. 2021
In Künker’s Summer Sale 350 the second part of the Friedrich Popken Collection will be on offer. The gorgeous Brunswick loesers have a lot to tell about the time of their creation. This film makes the silver coins speak.
error: