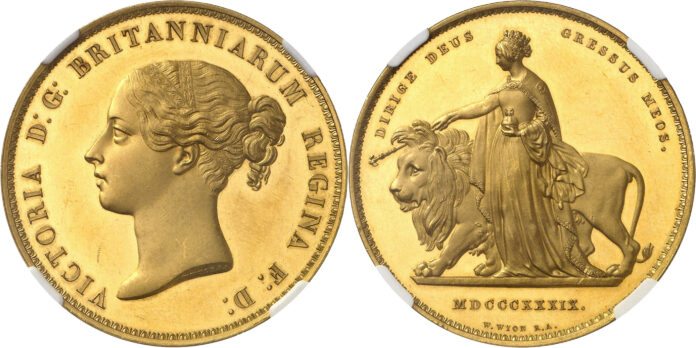 From 24 to 27 June 2019, the three summer auctions 322 to 324 took place at auction house Künker. The estimate was €5.1 million. The 1,600 bidders, which participated in the auction in person, by telephone, via internet or in writing, are the reason the result rocketed to €7.5 million. There were many exceptional winning bids. We will only discuss the top ten.

And so that all those whose budget would not have allowed it to buy any of these coins do not feel neglected, we will present a piece that is just as interesting and that every pupil could have bought with his pocket money.

Place no. 9 was conquered by two coins of the Phoibos Collection – both are part of the special collection “Rarities from Poland” – with a hammer price of €70,000. In total, four pieces of this high-class collection made the top ten. The reason was not alone their exquisite grading but also their rarity. Thus, the ducat of Sigismund I – under which the Polish Aristocratic Republic witnessed its “golden age” – at best can be graded as very fine. Nevertheless, this extremely rare coin got the same result as a very attractive, undated 5 ducat piece with perfect grade from Gdańsk featuring on the front the city view, on the reverse the portrait of John III Sobieski.

The estimate calculated by the specialists of the auction house Künker for a gold multiple of the British King George IV from 1826 was perfectly accurate. The 5 pound piece struck in proof quality, that was issued only at a mintage of 150 pieces and was graded PF63 by NGC, was sold at its exact estimate of €75,000.

In contrast, it was a surprise that the double reichstaler of the ruler of Mecklenburg Christian Louis I, that was minted in 1677 in Dömitz, climbed from €30,000 to €80,000. It is an extremely rare piece of the Mecklenburg numismatics. And moreover, the coin has an interesting historical background:

The monarch, portrayed with a splendid baroque wig, expresses with his coiffure his devotion to Louis XIV, in whose kingdom he lived for many years, far away from Mecklenburg. At the imperial court, he has neither been able to enforce the primogeniture for his descendants nor his own divorce. Louis XIV made at least the latter possible for him as well as a new marriage after Christian Louis I had converted to Catholicism.

The double reichstaler was minted while the regent dwelt in Paris. Perhaps the lack of supervision made it possible to hire a mint master for this task that already had spent time in the Hamburg debtor’s prison. In 1679, Werner Eberhardt was arrested also in Dömitz for the manipulation of coins. He died in prison in 1680.

Several facts connect the two coins that share place no. 5 with a hammer price of €85,000. Both are 10 ducat pieces that are graded almost extremely fine and that had an estimate of €50,000. However, in terms of time they are separated by almost exactly a century and geographically by 720 kilometres as the crow flies.

Let us take a closer look at them because they exemplify the stylistic differences between the Early Baroque and the Rococo: While Władysław IV is presented with heavy natural hair, Charles Albert – by the way, he is one of two emperors the House of Wittelsbach provided – stands out with a wig with long, curling hair, powdered white in the original. The difference is even more articulate if you look at the coat of arms. The simply structured coat of arms of the Early Baroque was replaced in the Rococo period by a coat of arms with elaborate rocaille decoration that nearly fades into the background given all the embellishment around it.

Another Polish rarity made the top ten. It is a ducat of Sigismund Augustus from 1549 that was sold at €92,500. Well, actually it is not a Polish, but a Lithuanian coin. Sigismund Augustus had it minted in Vilnius in his function of Grand Duke of Lithuania.

Heavy gold multiples are always in for a record, and therefore, all three coins on the numismatic winner’s podium belong to this category. In the third place is an off-metal strike in gold of 12 zecchini from Venice minted during the reign of doge Alvise IV Mocenigo. The hammer price was €100,000.

The extreme rarity of this gold multiple can be explained by the fact that under the reign of Alvise IV Mocenigo, the Republic of Venice did not have the resources to mint such gems. The economy stagnated. A huge part of the nobility lived on the breadline. In his memoirs, Giacomo Casanova describes how utterly poor several families had become, whose names were listed in the Golden Book of the city. Although the government broke new ground – they worked on a tax reform and built up new trade contacts to the Maghreb, Russia, and even to the United States, which were just coming to existence, – the financial situation was so bad that Alvise IV kept and presumably sold the valuable ring that the doge was supposed to throw into the sea every year on the occasion of the Sposalizio del Mare.

The second place of the top ten of Künker’s summer auctions goes to a 10 ducat piece of Emperor Matthias minted in 1619 in Vienna. Therefore, it originates from the decisive year of the Thirty Years’ War, in which the so-called Winter King Frederick V of the Palatinate let himself be elected King of Bohemia – an office usually held by the House of Habsburg. In this context, Emperor Matthias sought military and political support and provided high subsidies to its allies.

Almost more beautiful than this story is the coin’s unique provenance. Since 1814, the coin is known to be – the actual date might be even earlier – in the possession of a family whose members have been working as fishmongers at Lake Starnberg since the 15th century. It is nice to imagine that already at the time the coin was minted these fishermen supplied the fish for the Bavarian court. And in 1619, the latter had a close financial connection to Vienna: in 1619, Matthias and Maximilian I, Elector of Bavaria signed the Treaty of Munich. With this Treaty the Emperor obliged to provide Bavaria with the financial means necessary for the setting up of an army of 18,000 infantry and 2,600 cavalry. Therefore, it is absolutely possible that the coin from Vienna came into the hands of the fishermen as a payment from the Bavarian court.

And the winner is: a young lady that already kept the whole world in suspense in the year of her accession to the throne: Queen Victoria as Una and the Lion. The impressive 5 pound piece – one of the most beautiful coins of the British numismatics – was sold at €190,000.

The story of this coin has been told many times. The depiction refers to a poem composed during the reign of Queen Elizabeth I. The poet Edmund Spenser (1552-1599) created with his “Faerie Queene” a poetic reflection of the Virgin Queen. In her battle, nearly all the virtues helped her, that one still liked to see at a woman in the 19th century: chastity, moderation, kindness, justice softened by generosity – to only name a few. They appeared in the form of personifications like Una, the incarnation of truth and of the faithful church. Of course, such an Una tamed the Kingdom of England in a soft manner. Just as one would have liked to see Victoria do it. On this coin, as Una/Victoria with sceptre and orb she guides the heraldic symbol of England – a lion – as if it were a lamb.

The coin hides the fact that the reality was completely different. Victoria made some stupid mistakes at the beginning of her reign, and therefore she was more or less forced to marry, since it was hoped that a husband could tame her temperamental talent. Actually, that is what Albert of Saxe-Coburg and Gotha did. And Victoria owes to him the good reputation she has today. Only a few years after his death, she got involved in a new scandal: the whole country mocked “Mrs. Brown”, since Victoria obviously liked her groom, John Brown. (And at that point nobody knew that Victoria liked it to have him carry her around the palace.)

“Una and the Lion” is not only a beautiful coin, on whose possession one may congratulate the new owner. Moreover, it is the proof that good propaganda outshines all kinds of reality.

Are you sad because you cannot afford one of the top ten pieces? You do not have to be. Interesting coins are already on sale for pocket money prices. To prove this, we show you a Soldino of the Venetian doge Giovanni Dolfin that could have been purchased by auction for €50 + premium.

In 1348, ships coming from the Black Sea brought the plague to Genoa first and then to Venice. The Black Death was an apocalyptic experience for everyone who witnessed it. And yet, the politicians of those days had to cope with its consequences. One of these was the increase of food costs because there were not enough farmers left to produce it. Another consequence was the fact that all of a sudden there was a need of specialized workers. These two conditions forced the city fathers of Venice to pay the assistants of their mint masters higher wages. But, of course, somehow these higher costs had to be compensated – especially because the other officials had also received a substantial wage increase. For this purpose, in March 1353, a coin was revived that was quite popular amongst the Venetian dealers because of its high silver content: the Soldino. The new Soldino type was also made of silver of good quality, but it was significantly smaller and lighter. That is why the new Soldino resulted in a saving of silver of 1,2% per pound of account. And since the Zecca of Venice used silver worth many pounds of account in the minting process, this was a significant saving for the Venetian state budget.

And exactly such a new Soldino of Giovanni Dolfin (1356-1361) was sold at the Künker summer auctions for €50. The front shows the kneeling doge with the banner, the reverse the standing lion as the representative of Saint Mark also with the banner. The coin is a symbol for the ability of medieval cities to cope with the unbelievable and to keep going. And this even though the plague and the economic crisis came back in the following years. Doge Giovanni Dolfin also had to deal with financial problems and with the disease – in private and as an official: He lost his wife and his eldest son to the Black Death before he also died in 1361.

As you can see, it does not depend on the price whether a coin is interesting or not. Even if, of course, the spectacular coins that made the top ten are more impressive in an article.

All results can be found at the Künker website.

And if you are interested in the Mocenigo family and the history of Venice’s doges you should not miss this article.

Künker Auction 346: Iconography – The Language of the Images

January, 21. 2021
Images on coins convey messages that sometimes seem incomprehensible today. If you want to decipher them, you have to speak the language of images: iconography. Learn it in our video crash course with examples from Künker’s Auction Sale 346!
error: