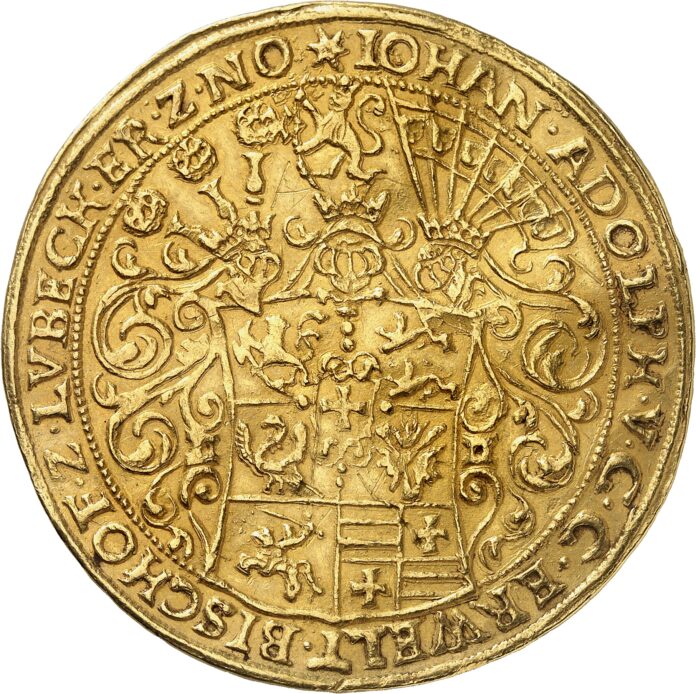 On 18 October 1590, Philip Duke of Schleswig-Holstein-Gottorf died at the age of 20. He hadn’t married yet, which is why the claim to the dukedom was handed over to his younger brother Johann Adolf, who, following the wishes of his father, had originally been supposed to follow a completely different career path.

As early as in 1585, when the little boy was at the tender age of ten, his father Adolf I Duke of Schleswig-Holstein-Gottorf made sure his son would become Archbishop of Bremen. One year later, Johann Adolf also became Bishop of Lübeck. The first Protestant bishop, by the way. Even though the city of Lübeck had already introduced the Reformation in 1531, the territory of the diocese with the capital of Eutin remained under Catholic control until Eberhard von Holle converted to Protestantism. As bishop of Lübeck, Johann Adolf was even entitled to mint coins and he could make use of this right at the mint of Eutin.

However, as mentioned above, his older brother died and Johann Adolf inherited the dukedom of Schleswig-Holstein-Gottorf.

The Fight for the Inheritance

At that time, Johann Adolf was 15 years old and thus underage. The territorial diets took advantage of that fact by refusing to pay hereditary homage to him. The Estates insisted on an old right to elect the duke, as it was customary, for example, regarding sinecures or the election of the German or Polish king. They had already tried to enforce this right to vote multiple times and only accepted Johann Adolf on 31 May 1592, mainly because of the pressure of the Danish king and perhaps also because Johann Adolf had given valuable gifts to the members of the Estates.

But this didn’t put an end to all problems. Johann Adolf’s younger brother, John Frederick also wanted a share of his father’s inheritance. To prevent the Estates from using the quarrel of the brothers against him, Johann Adolf decided to reach an agreement with his brother. He handed over the Archbishopric of Bremen to John Frederick in 1596. And as his brother still wasn’t satisfied, he also gave him the Prince-Bishopric of Lübeck in 1607.

These dates can probably help us to date one portugaleser and two half portugalesers, which will be on sale on 22 June 2020 at auction house Künker in Osnabrück in auction 337.

As part of the Dr Hergen Boyksen collection of coins and medals from Schleswig-Holstein, one portugaleser and two half portugalesers will be offered. These three coins are of major importance regarding monetary history and history in general. They all feature an inscription that seems to be similar at first glance, but is slightly different on each coin.

The inscription of the portugaleser of 10 ducats reads: Johann Adolf by the Grace of God Elected Bishop of Lübeck, Heir of Norway, Duke of Schleswig Holstein, Stormarn and Dithmarschen, Count of Oldenburg and Delmenhorst.

These coats of arms are depicted on the obverse: Norway, Schleswig, Stormarn, Holstein, Dithmarschen and Oldenburg-Delmenhorst with Lübeck as central coat of arms.

The inscription of one of the two half portugalesers of 5 ducats is: Johann Adolf by the Grace of God Elected Bishop of Bremen and Lübeck, Heir of Norway, Duke of Schleswig Holstein and Count of Oldenburg and Delmenhorst.

The depicted coats of arms are Norway, Schleswig, Stormarn, Holstein, Dithmarschen and Oldenburg-Delmenhorst with Lübeck as central coat of arms.

Thus, we can order the pieces chronologically:

This would match the historic events. Especially during the quarrel with his brother, when Johann Adolf still depended on the support of the Estates, the young duke had to buy the help of many protagonists by means of diplomatic gifts.

And splendid gold multiples like portugalesers were obviously perfect for this purpose. They looked impressive and by having them produced in two versions (single and half portugalesers), Johann Adolf always had the right gift at hand.

Why didn’t Johann Adolf mint ducats but these spectacular gold multiples “according to the Portuguese weight and fineness”, as you can read on their reverse?

Well, Lisbon had been the most important trade centre for African gold in the 15th century. And the gold imported from the Gold Coast and Sudan was exported to northern Europe in the form of a portuguez of 10 cruzados featuring the coat of arms of Portugal on one side, and the cross of the Portuguese Order of Christ on the other side. Rich merchants appreciated the coins, which made paying for valuable cargoes so much easier. And when portugalesers were no longer coming from Portugal, several cities and sovereigns of northern Europe continued minting this denomination.

By then, portugalesers were probably rarely used in everyday life. However, they were used as impressive gifts. We can assume this, among other things, from the fact that the city of Hamburg ensured that bank portugaleser with splendid depictions continued to be on the market until the 19th century.

Moreover, portugalesers were often used for saving purposes as they were stable in value. An example for this use of portugalesers can be found in an arithmetic book that was published in 1646 in Lübeck. The author, Isaac Hartwich, described practical problems. Students had to calculate the value of a merchant’s reserve fund containing: 134 double portugalesers, 120 portugalesers, 24 double rose nobles and 100 old reichstalers.

A Strong Duchy of Schleswig-Holstein-Gottorf

After settling the fight with his brother, Johann Adolf could fully concentrate on strengthening the position of the Duke of Schleswig-Holstein-Gottorf. In 1608 he introduced the principle of primogeniture, which means that after his death the Estates could no longer influence who succeeded him. He married a daughter of the Danish king without becoming completely tied to Denmark. He abolished the corporations and granted his citizens freedom of trade. Moreover, he was a great patron: he enlarged Gottorf Castle and set up an extensive collection of paintings, coins and weapons. Many of the pieces can still be seen at the museum island of Gottorf Castle.

And when Johann Adolf died unexpectedly on 31 March 1616 at the age of 41, the Estates immediately paid hereditary homage to his underaged son Frederick III without insisting on an election.

And here you can read the comprehensive auction preview of Künker’s June Auction where these portugalesers will be offered.

January, 20. 2022
Our cities have evolved through history, and every architectural detail is connected to this history. We explain why the Munich Schrannenplatz (Grain Market Square) was renamed Marienplatz (Mary’s Square), using coins that will be on offer at Künker’s 2022 January Auction Sales as illustrations.
error: