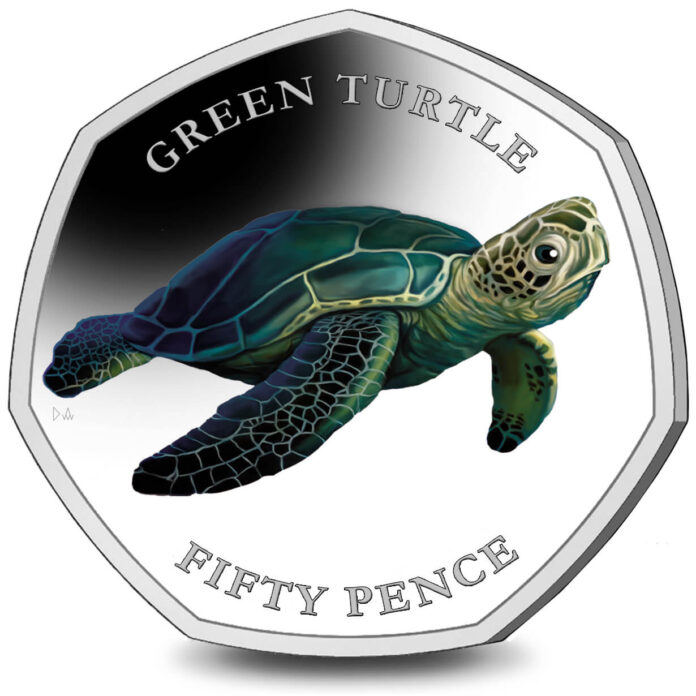 Sea Turtles have existed for 120 million years. They have a soft bony shell, flipper-like limbs and spend an incredible 99% of their lives in the ocean. The green sea Turtle will grow about 120 cm in length and weighing around 135-160k, the name comes from the green fat found beneath its carapace.

The Green Sea Turtle will travel long distances between feeding grounds and hatching beaches, it’s estimated that 1,000 females nest annually on the protected beaches of the British Indian Ocean Territory. This species is also listed as endangered. Sea Turtles are paramount to the many species whose survival is dependent on a healthy seagrass bed and coral reef.

The design on the coin itself features a Green Turtle swimming in the ocean. The obverse of the coin features the Pobjoy Mint exclusive effigy of Her Majesty Queen Elizabeth II.

The coin is available in Cupro Nickel Diamond Finish with the Turtle portrayed in colour. A special colour album, which is sold separately, has been designed to house all five coins.

You can find more information about the coin and the collection at the website of Pobjoy Mint.

Find out more about the green sea turtle at the World Wildlife’s website.

Alternatively, you can watch this video on sea turtles by National Geographic.

23. July 2020
The second coin in a new 50p series on behalf of South Georgia and the South Sandwich Islands features the Gentoo. The coin is made of coloured cupro nickel with diamond finish.
error: