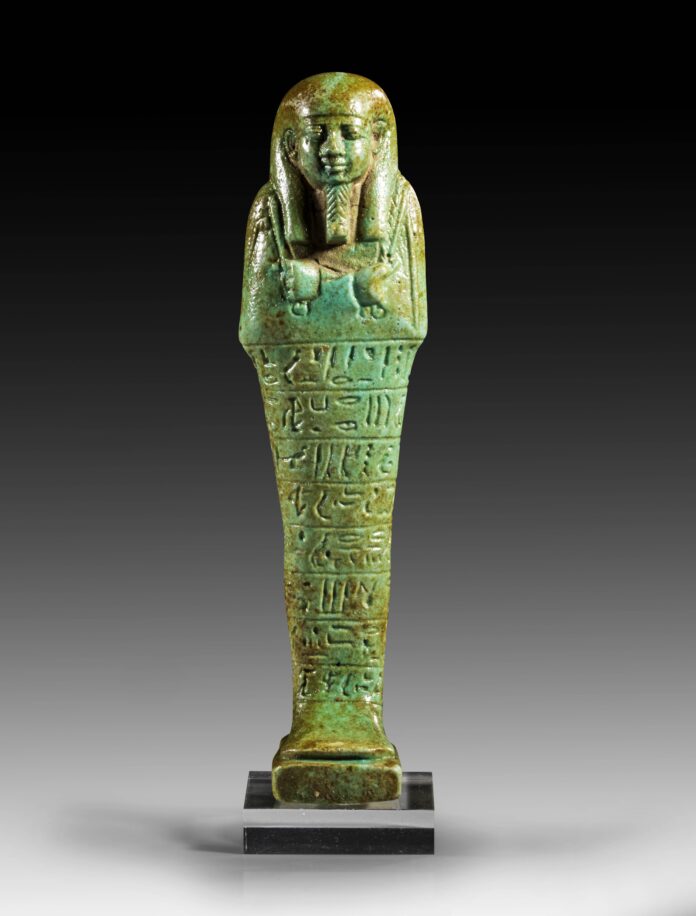 On 12 December, Gorny & Mosch’s auction 268 “Ancient Art” will take place in Munich. The auction is accompanied by a splendid catalogue. More than 850 lots will be on offer, including a selection of bronze sculptures (e.g. Lot 101A, 103). Once again, a part of the collection of the Israeli jeweller Shlomo Moussaieff (1925–2015) will be on sale, which mainly contains objects from different cultures that have not been on sale yet and which stem from London. The offer also includes terracotta sculptures and items from the Ancient Near East from the Karl Jakob Müller Collection, Frankfurt a.M., 1950–1977. Noteworthy is also the selection of ancient Egyptian artefacts including very interesting ushabtis, magnificent bronze sculptures and exquisite wooden objects. Highlights are among the offered ancient glass objects, too, and one of this auction’s specialities are early seal stones.

Campanian oinochoe of the Painter of New York GR 1000. Cumae, 340–330 BC. Ht. 34.7cm, ø 16.6cm, ø base 9.6cm. Red-figure, details in white and yellow. On the front an armoured warrior with cloak and spear leading a white horse, which is wearing a scarf around the neck, with one hand on the reins, in the background a tree. At the rear, a palmette between tendrils and flowers. With copy of the invoice from 1996! Intact.

Provenance: The current owner bought it in 1996 from Nina Borowski, Geneva; previously it had been part of an old Swiss private collection.

Roman face urn. End of the 1st century AD. Ht. 18.4cm, ø 12.7cm. Bulbous sand-coloured clay urn with bulging decoration structured by indentations and depicting the shape of a face. The massive eyebrows and the short, protruding nose are applied with simple kneaded clay. The eyebrows are ornamented with numerous indentations. The mouth and the eyes are made of applied clay balls and are deeply notched. With certificate of the Antiquities Cabinet Gackstätter (copy)! Perfectly intact with tiny chips on the foot and the left eye.

Provenance: From the L.V. Collection, Netherlands; from Antikenkabinett Gackstätter, Frankfurt; from the Schmitt Collection, Oberursel.

Tanagra figurine with colour traces. Boeotia, 2nd half of the 4th century BC. Ht. 19.5cm. Round burning hole at the rear. Statuette of a young woman standing on a flat rectangular plinth, wearing a richly draped chiton and a himation over her head, covering her upper body up to her knee. Traces of dark red and pink colour on the garment. The figure is standing on the right leg, the left, free leg is positioned at the side. The right arm is resting on the hip and completely covered by the coat. The himation is closely wrapped around the left, bent arm and falls in large folds to the knee. The figure holds a fan in her hand, which is completely wrapped in the coat. The head is tilted to one side. With colour traces! With French export licence! Parts of the plinth restored, the figure was reassembled of several fragments and restored at the rear side, too.

Provenance: From the Madame D. Collection, France, purchased in the 1980s.

Venus. Roman Imperial Period, 2nd century AD. Ht. 43cm. White, fine crystalline marble. Figure of a standing woman wearing a short-leaved, thin chiton accentuating the shape of her body and a himation wrapped around her hips. The goddess’ right hand is lowered and holds one end of the coat whereas the other end falls down between her legs in a knob positioned in front of her pubis contrary to the laws of gravity. The left arm is strongly bent, the left hand holds a braid falling on her shoulder. A little Eros sits on her right shoulder looking into the sky and grabbing the goddess’ hair. The hairstyle incorporates a diadem and is parted in the middle. Broken at the hip, neck, right elbow and right ankle and at the feet of Amor. Part of the hair has been restored. Plinth restored and stabilized. Old inventory number on the back.

Bronze lamp in the form of a bull. Late Hellenistic, 1st century BC. (?). Lgth. 24cm, ht. 11cm. Corpus in the form of a lying bull whose hind legs are positioned at the side while the front legs extend in two elongated nozzles. The filling inlet is rectangular, most parts of the lid, which is apparently made of iron, is missing today. On the forehead is a rectangular spout, probably for mounting a solar disc, characterizing the figure as Apis. Beautiful dark green patina. Lid missing.

Provenance: From an English private collection, purchased on the German art market in the 1990s. At Bertolami Fine Arts, London, auction 54, 2018, lot 100.

Gold pendant with the bust of Io. Roman, 1st–2nd century AD. 4.89 g, ø 3cm, Lgth. 3.6cm. Round medallion with three-dimensional, draped bust of Io with cow horns. A broad eye with relief at the top. A pseudo-granulated, circular gold wire at the edge. Gold. Traces of sinter, some tiny fissures, intact.

Provenance: Purchased in 1981 from the A.C. Collection, England. Previous English art market of the late 1970s.

Provenance: From a private collection, purchased on the Israeli art market in 2016.

Ushabti of Hor-khebi. Late Third Intermediate Period, 26th Dynasty, 588–568 BC. Ht. 15.4cm. Light blue gazed faience. Mummiform ushabti with straight, tripartite wig, the arms crossed on chest, with seed-basket and hand plough. Simple back pillar at the rear. The slightly curved god’s beard and the beautiful Saite smile are typical for the 26th Dynasty. An 8-line, horizontal hieroglyphic inscription recites parts of Chapter Six of the Book of the Dead and mentions the family and the name of the deceased. The latter was probably one of the great generals of the necropolis of Saqqara. The ushabti is characterized by a great delicacy of its facial features and of the hieroglyphs. With French export license, report of the previous owner, Art Loss Register verification and a copy of the invoice! Small chipping at base, otherwise intact.

It is also available online.

August, 29. 2019
In two catalogues Gorny & Mosch offers coins and medals from ancient to modern times, many of them in excellent conditions and from collections. The following e-auction features Judaica of the Shlomo Moussaieff Collection.
error: