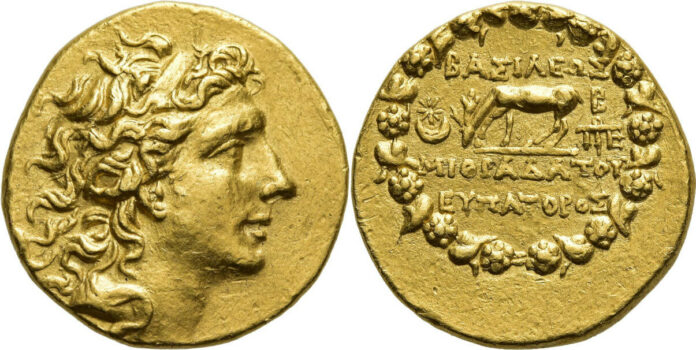 The market for historical coins is booming like hardly any other segment of the art market. Hammer prices of more than 100,000 euros are no longer unusual, and several pieces passed the one million euro mark last year. In this favourable environment, the Munich auction house Gorny & Mosch will be holding two large spring auction sales from 7 to 9 March 2022, containing about 1,200 ancient and ca. 950 coins and medals of modern times.

A special collection of Celtic coins stands out in the section of ancient coins. As a representative of this series, a unique specimen of this collection is shown here. On the obverse, the coin shows a typical Celtic abstraction of a “full moon face”, perhaps the head of the deer good Cernunnos seen from the front. The reverse depicts a figure with a large, ancient travelling hat whose arm is stretched out toward a shining star.

An example for the Greek coins is the gold stater of the Pontic King Mithridates VI (120-63 BC), one of Rome’s most dangerous enemies. The coin was minted in 88 BC to finance the war against Rome. The war had been triggered by a bloody slaughter of the Roman inhabitants of Asia Minor. At the instigation of Mithridates, between 80,000 and 100,000 Romans were killed in a single day. It was not until two decades later that Pompey the Great succeeded in defeating the Pontic king.

The section of Roman coinage includes an extensive private collection from the Rhineland. A heavy medallion of Emperor Severus Alexander is the highlight. Representative, large-format medallions like this one were used by the Emperor as personal gifts to members of the Senate aristocracy and high dignitaries of the administration. Accordingly, they were minted by the imperial mint in Rome. On the reverse we can see the emperor with a standard in his left hand, offering from a donation bowl over an alter to the enthroned goddess Salus, who is feeding a snake. The inscription is dedicated to the welfare of the emperor.

The section of medieval and modern coinage comprises 934 lots, including a collection of high-quality bracteates of the Middle Ages, Habsburg coinage and a special section with gold coins.

All lots of the auction can be viewed online.

For further information about the auction house, visit the website of Gorny & Mosch.

May, 21. 2020
In an additional E-Auction Gorny & Mosch will be offering ancient coins, and coins and medals from the Middle Ages to Modern Times. A particular highlight is the important E.L. collection of ‘Greek Imperials’ from a private owner from Southern Germany.
error: