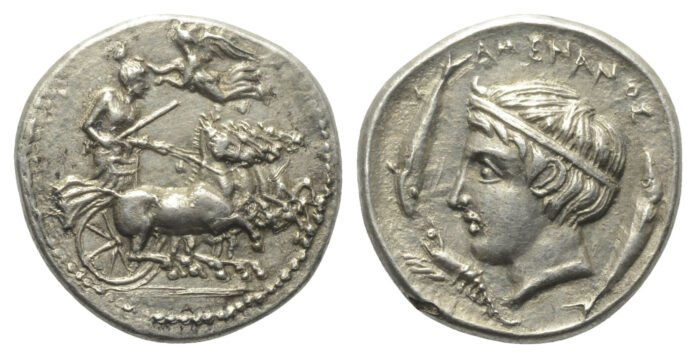 Solidus Summer Auction 62 has recently gone online. It contains 550 single lots, including many rare and some unusually beautiful collectibles. The auction offers a wide range of attractive coins from Antiquity, the Middle Ages and Modern Times, as well as some interesting medals. The auction will be held on the platform AUEX on Tuesday, July 21 from 4:00 p.m. (CEST) as live auction. Pre-bids can already be made.

The auction starts with a few selected Celtic silver coins, including a Hexadrachma of the Busumarus type. Contemporary imitations of ancient coins follow, mostly from Denarii of the Roman Republic. Among the range of Greek coins are some particularly beautiful coins from the Magna Graecia, especially from Sicily: for example a rare Litra and a very rare Drachma from Katana (Lots 20 and 21) as well as two Syracuse Tetradrachms of the 2nd democracy (Lots 23 and 24). A selection of beautiful bronze coins from this region round off the picture. The periphery of the Greek motherland is represented by coins from Thrace, Moesia Inferior and Macedonia. Noteworthy is a Tetradrachm from Akanthos depicting a lion catching a bull (Lot 55). A small series of Attic Tetradrachms comes from the heart of Greece. Among the Greek coins from Asia Minor, a probably unpublished Hemidrachm of the coastal city of Leukai is a desirable rarity. At the end of the Greek section you find a golden Stater from the early 4th century from Carthage.

A few provincial Roman bronzes are followed by an extensive series of Denarii of the Roman Republic from the middle of the 2nd to the middle of the 1st century BC. Among the coins of the Civil War period rare pieces can be found, including Denarii of Caesar, Sextus Pompeius and Marcus Antonius , among others jointly minted Denarii with Octavian (Lots 254 and 255) and an Alexandrian Denarius of Marcus Antonius and Cleopatra VII. Some Denarii of Augustus are followed by coins from the Roman Empire, also mostly Denarii. The end of the Antiquity section is formed by various Byzantine coins, including a rare Follis of the Heraclii revolt from Alexandria, 610 AD (Lot 289) and an attractive specimen of a rare ceremonial Miliarense by Constans II (Lot 290).

Medieval coins begin with a nice selection of German Denarii, including an impressive piece from Bavaria by Duke Heinrich IV as German king (Heinrich II), minted in Salzburg (Lot 296). Particular attention should also be paid to the splendid specimen of an early Denarius from Tübingen from the late 11th century (Lot 302), which is unknown in publications so far.

Extensive series of the Principalities of Moldavia and Wallachia form a clear focus among the medieval section. In particular, the Moldovan coins with numerous rarities and often in exceptional good state of preservation for this collection area are worth mentioning. The large, sometimes unpublished rarities include a Groschen from Alexandru II with a probably unknown mark (Lot 337), an Obol from Petru II (lot 341), or Groschen and Half Groschen from Bogdan III. cel Chior (Lots 357-359).

This is followed by coins from Germany before 1871 with some particularly pretty small coins, silver coins from the German Empire and the Weimar Republic, as well as coins from the Habsburgs. Among the European coins stands out a double Souverain d’or of the Spanish Netherlands from 1643 (Lot 479), which is followed by some Lion Thalers. After several Polish coins, an extensive series of coins from the Princely and Royal Kingdom of Romania catches the eye, many of amazingly good quality (Lots 501 – 523). Russian, Swiss and Hungarian coins as well as a selection of attractive medals end the auction.

You can find the auction on AUEX and on Sixbid.

You can place your maximum bids before the auction – or during the live auction, where you can bid on the lots in real time, similar to a floor auction, and thus actively influence the auction process.