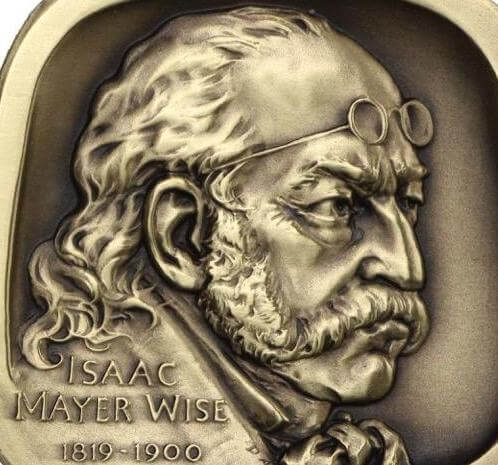 A medal depicting Rabbi Isaac Mayer Wise, designed by Eugene Daub, has been added to the Jewish-American Hall of Fame Series.

The high relief portrait of Wise was based on a plaque made by Boris Schatz; the Torah Breastplate depicted on the reverse was crafted by Andrew Messmer, and presented to Rabbi Wise on his 80th birthday. The plaque and breastplate are both in the collection of the Skirball Museum, Cincinnati. The medals were struck by The Highland Mint.

Isaac Mayer Weiss was born on March 29, 1819, the oldest son of Regina and Leo Weiss, in Steingrub, Bohemia (currently a part of the Czech Republic). He was a brilliant student, and at the age of nine, his father, a teacher, had taught him all he knew about the Bible and the Talmud. He then went to study with his grandfather, a physician, who died three years later. Weiss continued his studies in the Talmud and the Bible at various schools. He completed his formal education by attending the University of Prague and the University of Vienna for three years.

At the age of 23, in 1842, he appeared before a Beth Din – or a rabbinical court – of three well-known rabbis: Solomon Judah Rappaport, Samuel Freund, and Ephraim Loeb Teweles, who together conferred on him the title of rabbi. Two years later, he married Therese Bloch, who gave birth to ten children by him.

Weiss found that being a rabbi in Bohemia brought him problems with the government, because of the restrictions still in force against the Jews. He decided to come to America because of its religious freedom, arriving in New York on July 23, 1846 (and changed the spelling of his name to Wise).

Wise became the rabbi of Congregation Beth El in Albany, N.Y. He was there four years, initiating new reforms in the religious services. He introduced choral singing, confirmation to replace Bar Mitzvah, and the seating of men and women together in pews for services.

His changes resulted in much disapproval. In 1850, on the morning of the beginning of Rosh Hashanah that evening, Wise was dismissed at a rump meeting of the board of directors. The next day havoc broke loose between his followers and those who opposed him. Soon after, a group broke away from Beth El and, with Rabbi Wise, established a new Reform synagogue called Anshe Emet – “Men of Truth.”

In 1854, Wise went to Cincinnati, Ohio, to become rabbi of Beth K.K. B’nai Yeshurun, a Reform congregation. (Since 1931, the temple has been known as the Isaac M. Wise Temple.) He stayed there the rest of his life. It was from there that he tried creating a national organization of congregations. He found this a difficult task, as the Orthodox rabbis were at odds with the Reform movement. Nevertheless, despite his setbacks, Wise continued to advocate a union of congregations, a common prayer book, and a college to educate and train American rabbis.

Parts of his dreams came true when, in 1873, when delegates from 34 Reform congregations met in Cincinnati and organized the Union of American Hebrew Congregations. Two years later, in July 1875, the Union established the Hebrew Union College, the first Jewish seminary in the United States. Wise became its president and teacher.

Wise was also an organizer and mover in the establishment of the Central Conference of American Rabbis, in 1889. Elected its president, he served until he died. This conference adopted the Union Prayer Book that would be used by all Reform congregations. Rabbi Isaac Mayer Wise died on March 26, 1900.

A medal in the Jewish-American Hall of Fame

The 2-inch diameter Isaac Mayer Wise art medals are limited to no more than 150 bronze, 75 pure silver (3 oz.) and 35 gold-plated pure silver (3 oz.) medals. To order, call +1 818-225-1348, get more information online or send an email. Mention that you read about it in CoinsWeekly and you can take a 20% discount. Each medal is numbered on the edge, and comes with a certificate of authenticity.

Further information about the Jewish-American Hall of Fame medals can be found online.

The Jewish-American Hall of Fame series of medals was launched 50 years ago under the direction of Mel Wacks. It is now the longest continuing series of art medals in the United States, and perhaps the world.

A virtual tour of all medals of this series is available on the Jewish-American Hall of Fame website.

More information about Isaac Mayer Wise can also be found in the Encyclopaedia Britannica and the Jewish Virtual Library.