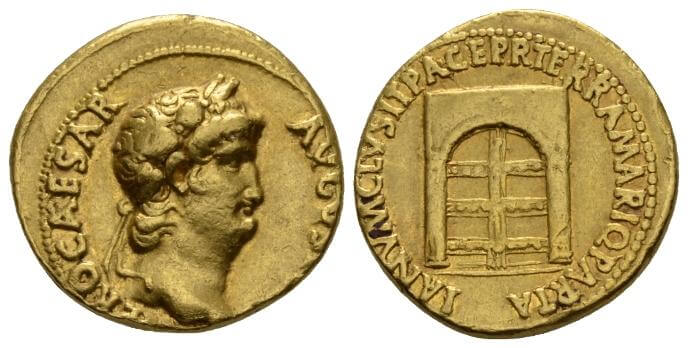 Naville Numismatics Live Auction 49 features a selection of 690 lots of Greek, Roman, Byzantine coins, all chosen with contribution from NAC’s experts. The sale will close on 12 May 2019, 16.00 UK time, at which time the live session will begin. Absentee bidders can bid electronically through Naville Numismatics website from the day the sale is published online up to the start of the live session.

The sale begins with a selection of coins, including bronzes and fractions, from Magna Graecia, Sicily and Greece, some of them from the E.E. Clain-Stefanelli collection sold in association with Stacks Bowers Galleries.
This section of the sale includes coins offers an attractive series of coins from Neapolis, Tarentum, Heraclea, Metapontum, Thurium, Velia, Caulonia, Croton, Syracuse, Athens and Corinth, even beyond a selection of Hellenistic portraits of Seleucid, Parthic and Ptolemaic kings.
Highlights include a wonderful stater of Philip II, and a rare tetradrachm of Autophrades.

The Imperial selection of the sale features an attractive series of Augustus, a wonderful as of Tiberius, an interesting sestertius of Agrippina Senior, a rare sestertius of Gaius with the three sisters on reverse, an interesting series of Nero, a beautiful sestertius of Domitian, a magnificent cistophoric tetradrachm of Nerva (Ex CNG 90, 2012, 1524 and NAC 106, 2018, 607 sales), a pleasant sestertius of Trajan, a rare denarius of Plotina, a well struck sestertius of Sabina, a very rare sestertius of Didius Julianus, an important sestertius of Geta from the Woodward collection, even beyond a selection of solidi, siliquae, denarii, tetradrachms, sestertii, dupondii, asses and folles, some of them from an old Canadian collection and from the M.J. collection, which includes Claudius, Nero, Galba, Vitellius, Vespasian, Domitian, Trajan, Hadrian, Antoninus Pius, Marcus Aurelius, Commodus, Septimius Severus, Caracalla, Geta, Elagabalus, Gordian I, Balbinus, Gordian III, Philip I, Philip II, Trajan Decius, Trebonianus Gallus, Postumus, Diocletian, Carausius, Allectus, Maximianus I, Constantius I, Galerius, Severus II, Licinius I, Constantine I, Julian II, Jovian, Valentinian I, Gratian, Magnus Maximus and Flavius Victor.
They are also remarkable as an aureus of Nero and a very rare sestertius of Gordian I.
In addition the auction presents an interesting and beautiful selection of Byzantine, Medieval and Modern World coins.

February, 3. 2022
Over 640 coins are offered by Naville in their Live Auction 71. The focus of the auction is on Greek and Roman coins, with many of them coming from the Clain-Stefanelli and the Dattari collection.
error: