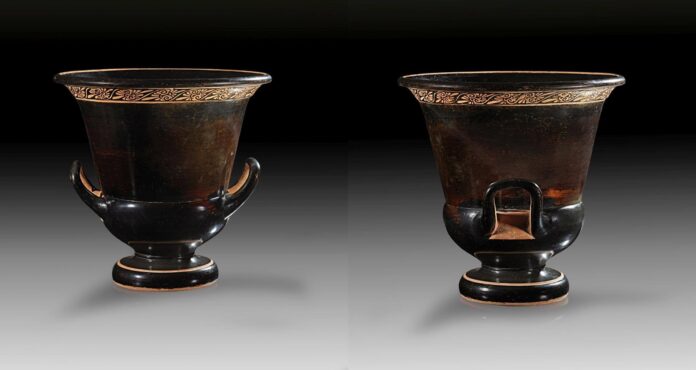 Gorny & Mosch presents for its auction 279 taking place on 9th July 2021 in Munich, a splendid print catalogue. More than 900 lots will be on offer, including a collection of Roman military diplomas from the estate of Peter Weiß. Among the African objects are pieces from the Gerd and Mareidi Stoll Collection and the Bavarian K.W. Collection. Moreover, ancient glasses of extraordinary quality and excellent pieces made of marble are on offer. The selection of Greek and Etruscan vases is remarkable too. Once again, numerous fine bronze sculptures will come under the hammer at this auction.

Provenance: formerly in a private collection in Monte Carlo; acquired in the 1980s at the gallery of Pierre-Eric Becker, Cannes.

Monumental Apulian hydria of the Patera Painter. Around 330 B.C. H 70.8cm. Red-figure with yellow and white details. On the front inside of a naiskos the sitting decedent between a servant with casket and a companion with fan. Left and right of the naiskos further companions – two of them sitting above and two standing below it – holding attributes of beauty. On the sides and the back large palmettes with tendrils. Between the handles each an ancient hole. With Italian export licence from 2021! Reassembled from fragments, little missing parts and lost colour are retouched.

Provenance: until 2020 in a German private collection, acquired for this collection in 1982 at Helmut Liebert Antiquitäten, Krefeld.

River god. Roman Imperial Period, 1st century A.D. H 18cm. White, fine crystalline marble. A fatherly, male deity with full beard and hear lies on a wavy ground with his left elbow on the ground and his legs crossed at the level of his ankles. In his right hand, resting on his right thigh, he holds a fish. His wide mantle covers only the legs below the hips and, like a mandorla, forms a frame for the magnificent, muscular body of the god which is presented slightly from the side. Below his left forearm there is the spout of a spring vessel, which – as can be concluded from the hole – was used as a fountain spout in ancient times. Minimal dents, otherwise intact.

Torso of an ephebos. Roman Imperial Period, 1st century A.D. H 37.5 cm. White, fine crystalline marble. The hip and thigh area of a delicate boy have survived, his right leg was set forwards, the left slightly back. His hips are strongly bent which can be clearly seen from the fact that the gluteal muscles are not at the same height. A large puntello at the left thigh. With Art Loss Register Report! Fragmentary.

Provenance: from the O.W. Private Collection, Vienna, acquired in the early 1990s at the Socowi Gallery, Vienna; in Germany since 2017.

Grave relief of Gaius Iulius from Byzantion. 1st century A.D. H 53.3cm. White, fine crystalline marble. Plate with deepened field for the depiction. On the left sits a woman wearing a chiton and a himation pulled over her head, probably holding a poppy capsule in her hand. On her left her husband in Greek dress. On his left a tripod table laden with cakes. In the corners at the bottom one small servant each in mourning posture. On the upper edge the inscription ΓΑΙΟΣ ΙΟΥΛΙΟΣ / ΒΥZΑΝΤΕΙΝΟΣ. Part of the bottom edge broken, restored horizontal crack, otherwise only minimal damage.

Silver wild goat and lion. Greek Archaic, probably Eastern Ionia, 6th-early 5th century B.C. Lion: L 5cm. Wild goat: L 4.5cm. Solid casting, details created in a cold work process. Both figures on a narrow, flat, slightly curved band, which has flat profiles on the outside of the underside. The lion’s mouth is open and its teeth are visible. The front paws are extended to the front, the bent hind legs are close to its body, the tail is wrapped around its bottom and the tip of the tail disappears under its body. The mane starts behind the ears and below the head, covering the entire neck and the front to the paws. It consists of flame-shaped strands. The goat is lying on the ground with its front legs folded and its head turned to the left. The ears are erected in alert and the magnificent horns protrude far back. A long, parted mane stretches from the back of the head over the back. Originally part of a device attachment. Impressive pieces! Toned, intact.

Bronze helmet face mask. Roman, 1st century A.D. H 15.5cm. Type Kalkriese. Mask with wide, stylized brows and almond-shaped eye openings, as well as other openings for the mouth and the nose. At the top, the mask was attached to the helmet by means of a hinge, which is missing today. This type of helmet was part of the parade equipment of the cavalry. Green patina, minimal fissures and a tiny fragment missing at the edges.

Provenance: from the U.L. Collection, Westphalia, since the 1980s.

Gold necklace with drop-shaped pendants. Hellenistic, 4th-3rd century B.C. 80.37g. L 40cm. Consisting of a 1.2cm braided strap of gold wire with a hook and eye closure. On both sides of the wire a round mounting with a fake stone shaped like a curved clay disk covered with white engobe. Attached to the braided strap are 25 small rosettes from which hang alternating egg-shaped and drop-shaped pendants. The drop-shaped pendants are made of gold and contain a set garnet stone.  In between are oak pendants hung on the rosettes with foxtail chains and containing a rosette in the centre themselves. The egg-shaped and oak pendants are made of clay, were originally gold-plated and are covered with white engobe. Remnants of the gilding are still recognizable. Gold. Splendid Necklace! Intact.

Provenance: from the E.W. Collection, Hesse, acquired in ca. 1967 at Kunsthandlung Neuhaus, Würzburg.

“Horus the Child” on a Lotus blossom. Third Intermediate Period, 21st-23rd dynasty, 1070-711 B.C. H 11.5cm. Light blue gazed faience. Detailed, particularly finely crafted statuette of the god Harpocrates seated on a Lotus blossom, holding the scourge in his right hand, bringing the index finger of his left hand to his mouth. On his head the double crown of Upper and Lower Egypt. The lotus, fanned out with many leaves, springs from a smooth, round stem and is flanked by two buds at the sides. With flat, rectangular base at the bottom. Very rare object! With two original certificates of authenticity! Glued break at neck area. Index finger of left hand and part of the crown missing.

Provenance: from the Italian private collection of Professor Semolini, Arezzo, before 1978; before “La Miniera”, Desio (Milan) and the Battarini family (Milan).

Bronze statuette of Neith. Saite Period, 26th dynasty, ca. 664 – 525 B.C. H 19cm. Full cast. Statuette stepping forth in a tight-fitting garment on a pedestal. Finely chiselled collar on her chest and her neck. The goddess is wearing the red deshret crown of Lower Egypt. The hieroglyphic inscription on three sides of the pedestal reads: “Words spoken (recitation): Neith is giving life. Consecrated by Be[…]Ba, son of Amenardis, he has made it.” Fine dark green patina, upper part of crown missing, both arms missing, otherwise intact.

Provenance: from the R. Bloch Collection, Munich, before 1976.

Achaemenid horse protome rhyton, ca. 5th-4th century B.C. H 16.5cm. Body with funnel-shaped, cross-ribbed body. Below the mouth a widened rib with ornamental groups of horizontal ribs. Horse protome with strongly bent forelegs, short, upright mane and harness. Slightly s-shaped curls go forward on both sides of the shoulder. Between the ears are two vertical holes (separately made horns or headdress?). Spout in the centre of the horse’s chest. With metal analysis! Small parts of the wall and the rim missing. Some of the fragments are included.

Provenance: from the K. G. Collection, Rhineland, purchased in the German art trade 1960s to 2003.

Provenance: from the K.W. Collection, Bavaria, before 1990.

Large Tapirapé feather mask (Cara Grande). Second half of the 20th century A.D. H 95cm. Flat, semi-circular wood board featuring a face in the form of a feather mosaic in yellow, turquoise and red. Two feather rosettes are inserted into the front of the disk; the edge is decorated with a wreath of feathers of different colours. The mask was held with both hands in front of the face and symbolizes the spirits of slain enemies. Intact.

Provenance: from private estate A.H., Munich, from the estate of a Bavarian museum director. In Germany before the 1980s.

Provenance: from the estate of a castle in southern Germany of the 1970s; in Germany before 1980; from the Dr. Dachs Collection, Munich.

April, 1. 2021
The German epigraphist and historian Peter Weiss assembled his extensive collection of ancient coins between 1967 and 2015. Now, it will be sold at Gorny & Mosch.