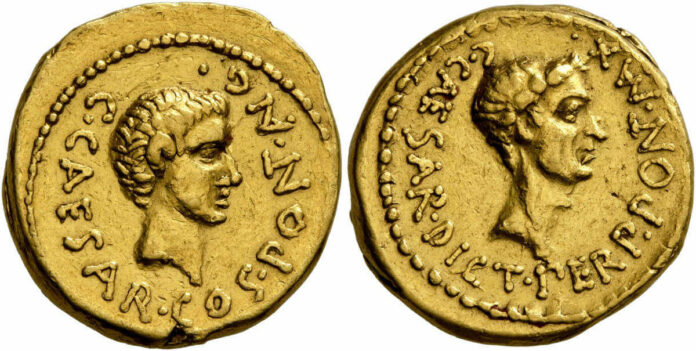 Leu Numismatik will be conducting their three public auctions 8-10 on 23 and 24 October 2021 in Zurich. On offer is a particularly interesting collection.

Six months ago, Leu Numismatik was entrusted with Dr. Krähenbühl’s collection, as well as his numismatic library and correspondence, and thereby with the task of preparing the 402 ancient and 2 modern coins for public auction – a task that has since provided Leu’s staff with many joyful and exciting hours. Dr. Krähenbühl’s magnificent library and lively correspondence with important representatives of Swiss coin trade and numismatic science were generously left to Leu Numismatik by his heirs – these historical sources and contemporary documents will henceforth adorn Leu’s library and make it through the coming decades in good care. Anyone who is interested in them is always welcome to visit Leu Numismatik in Winterthur.

Throughout his life, Dr. Krähenbühl was, in addition to his legal, political, social, and cultural interests and commitment, above all an enthusiastic collector of ancient coins. With passion and meticulousness, he compiled the present collection of magnificent Greek and Roman gold and silver coins over almost fifty years since the early 1960s. His preference was for stylish portraits on the coins, and so it was above all the impressive large nominals of the Seleukid rulers (lots 93-170) and the richly detailed gold coinage of the Roman emperors and empresses that were made accessible to the general public from 6 November 1982 to 6 February 1983 in the exhibition “Faces – Greek and Roman Portraits in Swiss Possession” at the Historical Museum in Bern.

Even though he made the selection of the pieces for his collection with a connoisseur’s eye on his own, Dr. Krähenbühl was assisted in an advisory capacity by many of the leading experts of the time. It was primarily Dr. Leo Mildenberg and Silvia M. Hurter, as well as Dr. Herbert A. Cahn and Dr. Hans Voegtli – in other words, the heads of the numismatic department of Bank Leu and of Münzen & Medaillen AG in Basel – who offered Dr. Krähenbühl coins for direct purchase or represented him on their behalf at the most important auctions abroad. It is striking how much esteem Dr. Krähenbühl enjoyed with these traditional auction houses – coins of great value were regularly sent to him for inspection, which he was then allowed to examine and marvel at, sometimes for months, before either incorporating them into his collection or, if they did not meet his high standards, returning them by mail. In this way he acquired no less than eight coins (lots 14, 17, 20, 23, 30, 72, 77, and 84) from the spectacular collection of C. Gillet (“Kunstfreund”), which are in no way inferior to other pieces in his collection in terms of rarity, preservation, and style. The sometimes very detailed correspondence between Dr. Krähenbühl and the coin dealers he trusted illustrates how much these professional numismatists cared about the well-kept structure of the collection offered here and how anxious the dealers were to find outstanding pieces for his collection and to present them to Dr. Krähenbühl.

Whether coins were awarded to Dr. Krähenbühl in the auction or pieces were sold to him directly, they remained permanently part of his collection. As the meticulously compiled documentation of his collection shows, only isolated coins were replaced by better specimens in the course of time – in many cases an improvement would not have been possible at all due to their rarity and extraordinary preservation. A great example of this is one of the highlights of the collection, the portrait aureus of Octavian and Julius Caesar (lot 280), which Dr. Krähenbühl acquired on 22nd October 1966 from the renowned Walter Niggeler Collection, Part 2, at the Basel auction of Bank Leu and Münzen & Medaillen AG for the then proud price of 6,100 CHF, and which, as his heirs told us, always filled him with particular pride. Now, more than half a century later, this wonderful coin sees the light of the coin trade again and is thus placed in the careful hands of another responsible collector.

All lots of auction 8, 9 and 10 can be viewed in the online catalog.

Leu Numismatik would be very pleased to welcome you to the auctions in Zurich on October 23-24, 2021, in person, by telephone, or online. For further information visit the website of Leu Numismatik AG.

Ken McDevitt is the New Director of Leu Numismatik USA