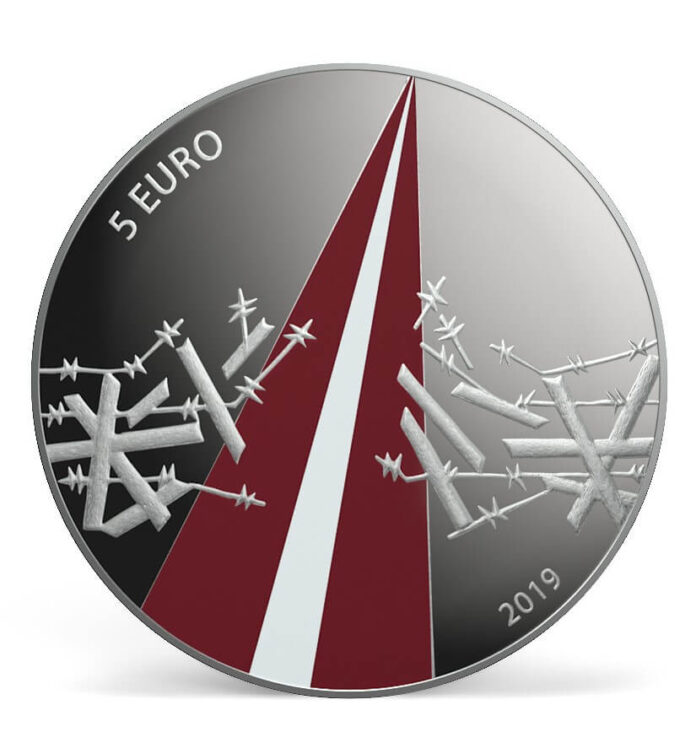 Latvijas Banka has issued a silver collector coin “Freedom Fights (1918–1920)” dedicated to the Latvian War of Independence and all those people who helped to win independence and hold freedom in high esteem.

The graphic design and plaster model of the collector coin “Freedom Fights (1918–1920)” have been created by artist Andris Vārpa. The coin is minted from silver, using a two-colour print to feature the flag.

A stylised march of fighters depicted in the Cubist manner is featured in the centre of the obverse, and a soldier bidding farewell to his fiancée – to the left of the centre. The inscription FREEDOM FIGHTS is arranged in a semicircle along the edge in the right upper part, but the inscriptions LATVIJA and the years 1918–1920 are located at the bottom part of the obverse.

The inscriptions LATVIJAS BANKA are separated by rhombic dots.

Born on the ruins of empires

The Republic of Latvia was born on the ruins of empires that had collapsed as a result of World War I. It took more than one and a half years for the people of Latvia to defend the newly acquired freedom and defeat external and internal enemies with weapons in hands. The military and political fight demonstrated the political maturity of the Latvian nation, its selflessness and the right to live in independent, democratic and free Latvia.

One of the most significant and complicated stages in the history of Latvia was the period between the proclamation of the Republic of Latvia on 18 November 1918 and the signing of the Peace Treaty with the Soviet Russia on 11 August 1920. This period is known today as the Latvian War of Independence. The name is relatively new, and it reflects the nature of the particular historical process in a concise manner, i.e. the Latvian people’s fight for the existence and independence of its national state.

Various names, i.e. the “Liberation War” as well as the emotional “Freedom Fights” and “Freedom War”, were also used by Latvian society between the two world wars to describe the military and political developments of 1918–1920. They are still in use, and they have taken root in the people’s historical consciousness. Regardless of the different names, they all symbolise one concept – the Latvian nation’s fight for its freedom, independence and statehood in 1918–1920.

The coin has been struck by UAB Lietuvos monetų kalykla (Lithuania).

For more information, visit the website of Latvijas Banka.

November 11 is Lāčplēsis Day in Latvia.

You can learn more about Latvia’s history here.

October, 29. 2020
The Latvian and Baltic numismatist society mourns the recent loss of Tatjana Berga on October 2, 2020. The dedicated archaeologist and numismatist was one of the most productive and versatile researchers of her generation. Viktors Dāboliņš remembers her.
error: